This chapter describes the device operations mechanism in Cisco Broadband Access Center (BAC). By using this mechanism, you can run CPE WAN Management Protocol (CWMP) remote procedure calls for a device and perform maintenance tasks, such as changing a device’s provisioning group.

Device operations are submitted in a batch by using the IPDevice.performOperation() API call. For details, refer to the API Javadoc which is available at BPR_HOME/docs/nb-api/javadoc .

The device operations supported in this Cisco BAC release are listed in Table 14-1 .

Before attempting to run immediate operations against a device, ensure that the device is reachable and that Cisco BAC is configured to perform connection requests to the device. See Connection Request Service. 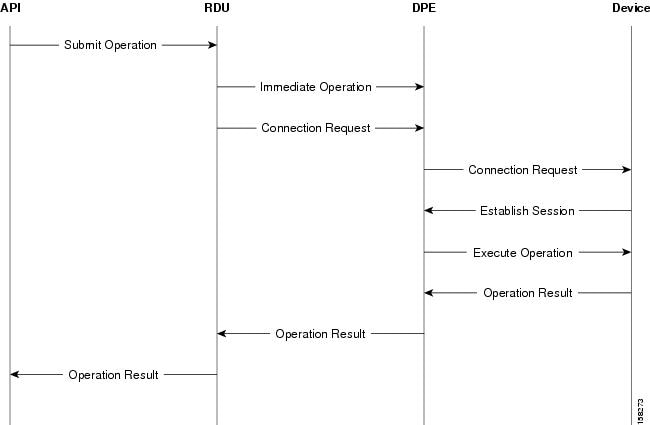 When the performOperation() API method is invoked specifying an immediate execution, the RDU constructs and sends corresponding operation instructions to all DPEs in the device’s provisioning group. Then, the RDU sends a connection request instruction to a specific DPE within the provisioning group; the DPE, in turn, sends a connection request notification to the device.

On-connect operations persist at each DPE in the device’s provisioning group. They are not removed from the DPEs until the RDU instructs the DPEs to do so (after notifying the client of the execution results using an AsyncOperationEvent). 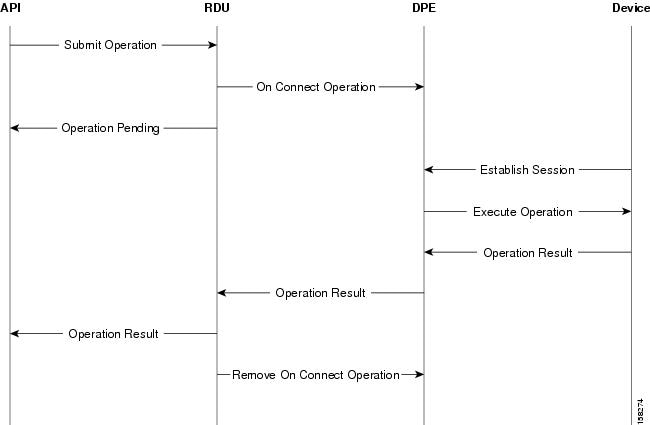 The API client constructs an IPDeviceOperation specifying an on-connect execution. It registers the appropriate AsyncOperationEvent listeners, then invokes the performOperation() API method. The RDU then constructs and sends corresponding operation instructions to all DPEs in the device’s provisioning group. The DPEs save the operation in their internal database. The RDU batch completes, and the BatchStatus is returned to the API client.

Asynchronous mode facilitates the RDU to execute the asynchronous immediate operation without reserving a PACE thread for the complete operation. The TR-069 IPDevice operations like GetParameterValues and GetParamValues RPC can be performed with this mode. This feature helps in increasing the RDU efficiency in serving more number of API operation requests.

The asynchronous operation is performed as follows:

The API client submits asynchronous operation batches to the RDU.

The RDU sends the asynchronous operation request to the DPE.

The DPE sends the connection request result to the RDU.

When the connection request to CPE is successful, the CPE establishes a session in a separate thread, and the DPE executes the asynchronous operation on the CPE. 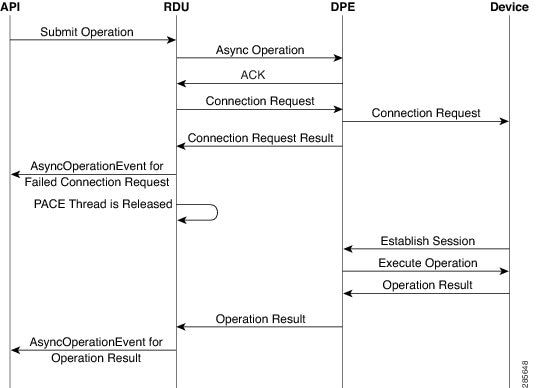 You must use the batch mode flag, ASYNC_AUTOMATIC during the asynchronous operation mode.

The API command Configuration.getRDUDetails() is enhanced to report statistics of the following asynchronous operations:

You cannot change a device’s provisioning group if the DPE cannot connect to the RDU.

If the home provisioning group is down or is not responding, the DPE that receives the Inform message returns the 503 Service Unavailable error along with the Retry-After header. Thereafter, the session with the device is dropped.

Figure 14-4 highlights the basic flow when a device attempts to establish a session with the wrong provisioning group.