The IPsec VPN High Availability Enhancements feature consists of two features—Reverse Route Injection (RRI) and Hot Standby Router Protocol and IPsec (HSRP). When used together, these two features work together to provide users with a simplified network design for VPNs and reduced configuration complexity on remote peers with respect to defining gateway lists.

Your software release may not support all the features documented in this module. For the latest feature information and caveats, see the release notes for your platform and software release. To find information about the features documented in this module, and to see a list of the releases in which each feature is supported, see the "Feature Information for IPsec VPN High Availability Enhancements" section.

To configure the IPsec VPN High Availability Enhancements feature, you should understand the following concepts:

Reverse Route Injection (RRI) simplifies network design for Virtual Private Networks (VPNs) in which there is a requirement for redundancy or load balancing. RRI works with both dynamic and static crypto maps.

Ensures predictable failover time of remote sessions between headend devices when using IKE keepalives, especially in environments in which remote device route flapping is common (not taking into consideration the effects of route convergence, which may vary depending on the routing protocol used and the size of the network).

Eliminates the need for the administration of static routes on upstream devices, as routes are dynamically learned by these devices.

In the dynamic case, as remote peers establish IPsec security associations (SAs) with an RRI-enabled router, a static route is created for each subnet or host protected by that remote peer. For static crypto maps, a static route is created for each destination of an extended access list rule. When RRI is used on a static crypto map with an access control list (ACL), routes will always exist, even without the negotiation of IPsec SAs.

Use of any keyword in ACLs with RRI is not supported.

When routes are created, they are injected into any dynamic routing protocol and distributed to surrounding devices. This traffic flows, requiring IPsec to be directed to the appropriate RRI router for transport across the correct SAs to avoid IPsec policy mismatches and possible packet loss.

Figure 1 shows a RRI configuration functionality topology. Remote A is being serviced by Router A and Remote B connected to Router B, providing load balancing across VPN gateways at the central site. RRI on the central site devices ensures that the other router on the inside of the network can automatically make the correct forwarding decision. RRI also eliminates the need to administer static routes on the inside router. 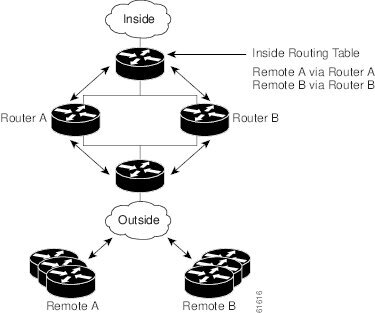 Hot Standby Router Protocol (HSRP) provides high network availability by routing IP traffic from hosts on Ethernet networks without relying on the availability of any single router. HSRP is particularly useful for hosts that do not support a router discovery protocol, such as ICMP Router Discovery Protocol (IRDP) and do not have the functionality to switch to a new router when their selected router reloads or loses power. Without this functionality, a router that loses its default gateway because of a router failure cannot communicate with the network.

HSRP is configurable on LAN interfaces using standby command-line interface (CLI) commands. It is now possible to use the standby IP address from an interface as the local IPsec identity or local tunnel endpoint.

Failover can be applied to VPN routers through the use of HSRP. Remote VPN gateways connect to the local VPN router through the standby address that belongs to the active device in the HSRP group. This functionality reduces configuration complexity on remote peers with respect to defining gateway lists, because only the HSRP standby address needs to be defined.

Figure 2 shows the enhanced HSRP functionality topology. Traffic is serviced by the active Router P, the active device in the standby group. In the event of failover, traffic is diverted to Router S, the original standby device. Router S assumes the role of the new active router and takes ownership of the standby IP address. 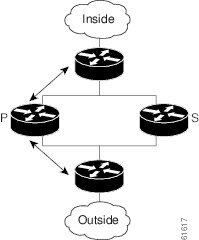 In case of a failover, HSRP does not facilitate IPsec state information transference between VPN routers. This means that without this state transference, SAs to remotes will be deleted, requiring Internet Key Exchange (IKE) and IPsec SAs to be reestablished. To make IPsec failover more efficient, it is recommended that IKE keepalives be enabled on all routers.

To create a dynamic crypto map entry and enable RRI, perform the steps in this section.

Before configuring RRI on a static crypto map, note that:

Routes are not created based on access list 102, as reverse-route is not enabled on mymap 2. RRI is not enabled by default and is not displayed in the router configuration.

Enable a routing protocol to distribute the VPN routes to upstream devices.

If Cisco Express Forwarding (CEF) is run on a VPN router configured for RRI, adjacencies need to be formed for each RRI injected network through the next hop device. As the next hop is not explicitly defined in the routing table for these routes, proxy-ARP should be enabled on the next hop router, which allows the CEF adjacency to be formed using the layer two addresses of that device. In cases where there are many RRI injected routes, adjacency tables may become quite large, as an entry is created for each device from each of the subnets represented by the RRI route. This issue is to be resolved in a future release.

To add RRI to a static crypto map set, perform the steps in this section.

When configuring HSRP with IPsec, the following conditions may apply:

If a user adds the standby IP address and the standby name to an interface with the requirement IPsec failover, the crypto map must be reapplied with the appropriate redundancy information.

Standby priorities should be equal on active and standby routers. If they are not, the higher priority router takes over as the active router. If the old active router comes back up and immediately assumes the active role before having time to report itself standby and sync, connections will be dropped.

The IP addresses on the HSRP-tracked interfaces on the standby and active routers should both be either lower or higher on one router than the other. In the case of equal priorities (an HA requirement), HSRP will assign the active state-based IP address. If an addressing scheme exists so that the public IP address of router A is lower than the public IP address of router B, but the opposite is true for their private interfaces, an active/standby-standby/active split condition could exist, which will break connectivity.

To apply a crypto map set to an interface, perform the steps in this section.

To verify your VPN IPsec crypto configuration, perform the steps in this section.

In the following example, using the reverse-route command in the definition of the dynamic crypto map template ensures that routes are created for any remote proxies (subnets or hosts), protected by the connecting remote IPsec peers.

This template is then associated with a "parent" crypto map statement and then applied to an interface.

RRI is a good solution for topologies that require encrypted traffic to be diverted to a VPN router and all other traffic to a different router. In these scenarios, RRI eliminates the need to manually define static routes on devices.

RRI is not required if a single VPN router is used, and all traffic passes through the VPN router during its path in to and out of the network.

If the user chooses to manually define static routes on the VPN router for remote proxies, and has these routes permanently installed in the routing table, RRI should not be enabled on the crypto map instance that covers the same remote proxies. In this case, there is no possibility of user-defined static routes being removed by RRI.

Routing convergence can affect the success of a failover based on the routing protocol used to advertise routes (link state versus periodic update). It is recommended that a link state routing protocol such as OSPF be used to help speed convergence time by ensuring that routing updates are sent as soon as a change in routing state is detected.

In the following example, RRI is enabled for mymap 1, but not for mymap 2. Upon the application of the crypto map to the interface, a route is created based on access-list 101 analogous to the following:

The following example shows how all remote VPN gateways connect to the router via 192.168.0.3. The crypto map on the interface binds this standby address as the local tunnel endpoint for all instances of mymap and at the same time ensures that HSRP failover is facilitated between an active and standby device belonging to the same standby group, group1.

Note that RRI also provides the ability for only the active device in the HSRP group to be advertising itself to inside devices as the next hop VPN gateway to the remote proxies. If there is a failover, routes are deleted on the formerly active device and created on the newly active device.

Table 1 lists the features in this module and provides links to specific configuration information.