Stateful failover for the Cisco IOS firewall enables a router to continue processing and forwarding firewall session packets after a planned or unplanned outage occurs. You employ a backup (secondary) router that automatically takes over the tasks of the active (primary) router if the active router loses connectivity for any reason. This process is transparent and does not require adjustment or reconfiguration of any remote peer.

Stateful failover for the Cisco IOS firewall is designed to work in conjunction with stateful switchover (SSO) and Hot Standby Routing Protocol (HSRP). HSRP provides network redundancy for IP networks, ensuring that user traffic immediately and transparently recovers from failures in network edge devices or access circuits. That is, HSRP monitors both the inside and outside interfaces so that if either interface goes down, the whole router is deemed to be down and ownership of firewall sessions is passed to the standby router (which transitions to the HSRP active state). SSO allows the active and standby routers to share firewall session state information so that each router has enough information to become the active router at any time. To configure stateful failover for the Cisco IOS firewall, a network administrator should enable HSRP, assign a virtual IP address, and enable the SSO protocol.

Your software release may not support all the features documented in this module. For the latest feature information and caveats, see the release notes for your platform and software release. To find information about the features documented in this module, and to see a list of the releases in which each feature is supported, see the "Feature Information for Cisco IOS Firewall Stateful Failover" section.

How to Configure Stateful Failover for Cisco IOS Firewalls

This document assumes that you have a complete Cisco IOS firewall configuration.

The active and standby Cisco IOS routers must be running the same Cisco IOS software,
Release 12.4(6)T or later.

Stateful failover for the Cisco IOS firewall requires that your network contains two identical routers that are available to be either the primary or secondary device. Both routers should be the same type of device, have the same CPU and memory.

This feature is currently supported only on a limited number of platforms. To check the latest platform support, go to Cisco Feature Navigator at http://www.cisco.com/go/fn.

When configuring redundancy for a Cisco IOS firewall, the following restrictions exist:

HSRP requires the inside interface to be connected via LANs.

Load balancing is not supported; that is, no more than one device in a redundancy group can be active at any given time.

Any restrictions that exist for intradevice SSO will also exist for the firewall High Availability (HA). The behavior of intra-device active where the Active device re-boots when the SSO state changes from Active to anything will be the same with firewall HA.

No support for configuration synchronization and In-Service Software Upgrade (ISSU) which are not yet available for intra-box failover in Cisco IOS T releases.

Stateful failover of the Cisco IOS firewall is not supported with Zone-Based Policy firewall configuration.

This phase of the feature will not provide support for asymmetric routing and it is the responsibility of the user to configure the network to avoid this.

The stateful failover feature does not synchronize any statistics or mib firewall information between the active and standby devices.

The stateful failover feature does not support rate-limiting of firewall sessions on the standby router for the failed over sessions.

Currently only Layer 4 TCP and UDP protocol failover is supported. Therefore, all TCP only sessions, UDP only sessions, and single channel granular protocols sessions for which L7 inspection is not supported are failed over.

Any session configured for Layer 7 inspection will NOT be failed over.

It is recommended that you implement stateful failover in one of the following recommended deployment scenarios:

You need to configue HSRP tracking in order to track multiple pairs of interfaces. If you run HSRP on only one pair of interfaces, or run on both without mutual tracking of the pairs, each pair functions independently of each other and are unaware of each other's state changes. For example, if HSRP is run on only the two outside interfaces (as shown in Figure 1), this could cause HSRP to failover on the outside interfaces, whilst the inside interfaces are unchanged. This causes the black holing of traffic, which continues to be directed to the primary from the inside. This introduces the possibility of problems arising from one interface on a primary router failing and triggering a move to the secondary, while the other interface on the ex-primary remains active. Mutual tracking means that if the outside interface does fail, the inside interface on the same router will also be deemed down allowing for complete router failover to the secondary. 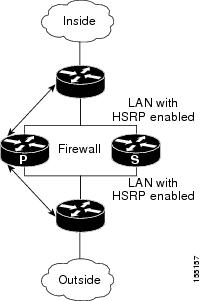 In the scenario where the LAN interfaces track the WAN interfaces, the failover to the standby happens immediately. However, for traffic to start flowing on the new active router, routing convergence needs to happen. The net failover time is dictated by the routing protocol.

Firewall stateful failover is a client of Cisco IOS SSO. SSO is a method of providing redundancy and synchronization for Cisco IOS applications and features.

The synchronization manager will be responsible for checking firewall to determine the state of the active device, which must be check pointed to the redundant peers and update that state on the firewall on standby devices.

Periodic updates are sent from the active to the standby for all HA sessions. This information enables the standby to take over the sessions and process the sessions if there is a failover.

The stateful failover feature supports deterministic updates. This means that the updates for a session get sent every N seconds, where N is configurable. Default value for N is 10 sec.

How to Configure Stateful Failover for Cisco IOS Firewalls

HSRP provides two services—IP redundancy and a Virtual IP (VIP) address. Each HSRP group may provide either or both of these services. Cisco IOS firewall stateful failover uses the IP redundancy services from only one HSRP standby group. It can use the VIP address from one or more HSRP groups. Use the following task to configure HSRP on the outside and inside interfaces of the router.

Perform this task on both routers (active and standby) and on both interfaces of each router.

If a switch connects the active and standby routers, you must perform one of the following steps to ensure that the correct settings are configured on that switch:

Enable the spanning-tree portfast command on every switch port that connects to a HSRP-enabled router interface.

Disable the Spanning Tree Protocol (STP) on the switch only if your switch does not connect to other switches. Disabling spanning tree in a multi-switch environment may cause network instability.

Enable the standby delay minimum [min-delay] reload [reload-delay] command if you do not have access to the switch. The reload-delay argument should be set to a value of at least 120 seconds. This command must be applied to all HSRP interfaces on both routers.

For more information on HSRP instability, see the document Avoiding HSRP Instability in a Switching Environment with Various Router Platforms.

You must perform at least one of these steps for correct HSRP operation.

Both the inside (private) interface and the outside (public) interface must belong to separate HSRP groups, but the HSRP group number can be the same.

The state of the inside interface and the outside interface must be the same—both interfaces must be in the active state or standby state; otherwise, the packets will not have a route out of the private network.

Standby priorities should be equal on both active and standby routers. If the priorities are not equal, the higher priority router will unnecessarily take over as the active router, negatively affecting uptime.

The IP addresses on the HSRP-tracked interfaces of the standby and active routers should both be either lower or higher on one router than the other. In the case of equal priorities (an HA requirement), HSRP will assign the active state on the basis of the IP address. If an addressing scheme exists so that the public IP address of Router A is lower than the public IP address of Router B, but the opposite is true for their private interfaces, an active/standby-standby/active split condition could exist which will break connectivity.

Interface ACL should allow HSRP traffic to flow through.

The following example shows how to configure HSRP on a router:

After you have successfully configured HSRP on both the inside and outside interfaces, you should enable SSO as described in the section "Enabling SSO."

Use this task to enable SSO, which is used to transfer Cisco IOS firewall session state information between two routers.

SSO is a method of providing redundancy and synchronization for many Cisco IOS applications and features. SSO is necessary for the Cisco IOS firewall to learn about the redundancy state of the network and to synchronize their internal application state with their redundant peers.

You should configure HSRP before enabling SSO.

To avoid losing SCTP communication between peers, be sure to include the following commands to the local address section of the SCTP section of the IPC configuration:

The following example shows how to enable SSO:

After you have enabled SSO, you should enable stateful failover for a firewall, as shown in the following section.

Use this task to enabling Stateful Failover for the Cisco IOS firewall.

The inspect rules should not have ICMP or protocols for which Cisco IOS firewall supports Layer 7 inspection.

Use this task to change the amount of time between each update to the standby. The default interval of 10 seconds.


If audit trail is configured on the standby HA device the standard alerts that are shown when a session is added or deleted will be changed to reflect that the session is a standby session. Table 2 contains the stateful failover alert messages.

The following output example shows stateful failover that has been configured on a Cisco IOS router:

Table 3 lists the features in this module and provides links to specific configuration information.