The MPLS Traffic Engineering: Interarea Tunnels feature allows you to establish Multiprotocol Label Switching (MPLS) traffic engineering (TE) tunnels that span multiple Interior Gateway Protocol (IGP) areas and levels, removing the restriction that had required the tunnel headend and tailend routers both be in the same area. The IGP can be either Intermediate System-to-Intermediate System (IS-IS) or Open Shortest Path First (OSPF).

Your network must support the following software features:

To configure an interarea tunnel, you specify on the headend router a loosely routed explicit path for the tunnel label switched path (LSP) that identifies each ABR the LSP should traverse using the next-address loose command. The headend router and the ABRs along the specified explicit path expand the loose hops, each computing the path segment to the next ABR or tunnel destination.

For example, to configure a TE tunnel from router R1 to router R3 in the simple multiarea network shown in the figure below, you would specify ABR1 and ABR2 as loose hops in the explicit path for the tunnel.

The autoroute destination feature allows you to automatically route traffic through a TE tunnel instead of manually configuring static routes.

You enable this feature on a per-tunnel basis by using the tunnel mpls traffic-eng autoroute destination command.

The following sections describe how the autoroute destination feature interacts with other features:

TE tunnels that have the autoroute destination feature enabled can also be configured as class-based traffic shaping (CBTS) tunnel bundle masters or members. Within a CBTS bundle, only the master tunnel with autoroute destination enabled is installed into the Routing Information Base (RIB); that is, the member tunnels are not installed into the RIB.

If member tunnels that have autoroute destination enabled are unconfigured from the bundle, they become regular TE tunnels and TE requests that the static process installs static routes over those tunnels in the RIB. Conversely, when regular TE tunnels with autoroute destination enabled are added to a CBTS bundle as members, TE requests that the static process removes the automatic static routes over those tunnels from the RIB.

For each ABR that is running OSPF, perform the following steps to configure traffic engineering on each area you want tunnels in or across. By having multiple areas and configuring traffic engineering in and across each area, the router can contain changes within the network within an area.

For each non-ABR that is running OSPF, perform the following steps to configure OSPF.

To configure IS-IS for nonbackbone routers, perform the following steps.

To configure IS-IS for interfaces, perform the following steps.

This section shows how to configure MPLS traffic engineering interarea tunnels for the simple router topology illustrated in the figure below. It includes configuration fragments that illustrate the configurations shown in the following sections: 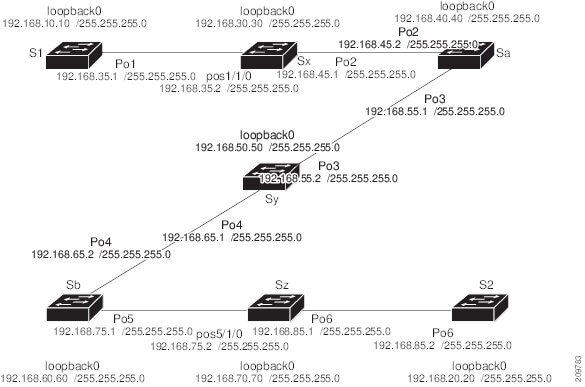 The following configuration fragments show how to configure OSPF for interarea tunnels assuming that:

The following configuration fragments illustrate how to configure IS-IS for interarea tunnels assuming that:

The following configuration fragments show how to configure MPLS and RSVP to support traffic engineering on the routers.

The configuration of routers Rx, Ra, Ry, Rb, Rz, and R2 for traffic engineering operation is similar to that for R1.

The following configuration fragments show how to configure an MPLS traffic engineering interarea tunnel. Tunnel1 is configured with a path option that is loosely routed through Ra and Rb.

The following commands configure an MPLS TE tunnel to use explicit paths:

The following example shows how to configure an MPLS TE tunnel with autoroute destination:

ABR --Area Border Router.A router connecting two areas. In OSPF, ABRs belong to both areas and must maintain separate topological databases for each. When an OSPF router has interfaces in more than one area, it is an Area Border Router.

area --A logical set of network segments (for example, one that is OSPF-based) and their attached devices. Areas usually are connected to other areas by routers, making up a single autonomous system. OSPF and IS-IS define their areas differently. OSPF area borders are marked by routers. Some interfaces are in one area, and other interfaces are in another area. With IS-IS, all the routers are completely within an area, and the area borders are on links, not on routers. The routers that connect the areas are level-2 routers, and routers that have no direct connectivity to another area are level-1 routers.

area ID --In an IS-IS router, this area address is associated with the entire router rather than an interface. A router can have up to three area addresses. Both the area ID and the system ID are defined on an IS-IS router by a single address, the Network Entry Title (NET).

headend --The upstream, transmit end of a tunnel. The router that originates and maintains the traffic engineering LSP.

label switched path (LSP) tunnel --A configured connection between two routers in which label switching is used to carry the packets.

level-1 routers --Routers that are directly connected to other areas. The routers are not in the backbone. MPLS does not run in the background. These routers are also called internal routers.

level-2 routers --Routers that connect two areas. These routers let you run MPLS in the background.

load balancing --The distribution of traffic among multiple paths to the same destination so that the router uses bandwidth efficiently. Load balancing increases the use of network segments, thus increasing effective network bandwidth.

MPLS --Multiprotocol Label Switching. A method for forwarding packets (frames) through a network. It enables routers at the edge of a network to apply labels to packets. ATM switches or existing routers in the network core can switch packets according to the labels with minimal lookup overhead.

process ID --Distinguishes one process from another within the device. An OSPF process ID can be any positive integer, and it has no significance outside the router on which it is configured.

router ID --Something by which a router originating a packet can be uniquely distinguished from all other routers. For example, an IP address from one of the router’s interfaces.

static routing --A static route is a fixed path preprogrammed by a network administrator. Static routes cannot make use of routing protocols and don’t self-update after receipt of routing update messages; they must be updated by hand.

tailend --The downstream, receive end of a tunnel. The router that terminates the traffic engineering LSP.

traffic engineering --The techniques and processes that cause routed traffic to travel through the network on a path other than the one that would have been chosen if standard routing methods were used.