To obtain link and node protection by using the Resource Reservation Protocol (RSVP) with Hellos support, refer to the MPLS TE: Link and Node Protection, with RSVP Hellos Support (with Fast Tunnel Interface Down Detection) process module. RSVP Hellos enable a router to detect when a neighboring node has gone down but its interface to that neighbor is still operational.

Fast Reroute (FRR) is a mechanism for protecting Multiprotocol Label Switching (MPLS) traffic engineering (TE) label switched paths (LSPs) from link and node failures by locally repairing the LSPs at the point of failure, allowing data to continue to flow on them while their headend routers attempt to establish new end-to-end LSPs to replace them. FRR locally repairs the protected LSPs by rerouting them over backup tunnels that bypass failed links or nodes.

Backup tunnels that bypass only a single link of the LSP's path provide link protection. They protect LSPs if a link along their path fails by rerouting the LSP's traffic to the next hop (bypassing the failed link). These are referred to as next-hop (NHOP) backup tunnels because they terminate at the LSP's next hop beyond the point of failure.

FRR provides node protection for LSPs. Backup tunnels that bypass next-hop nodes along LSP paths are called next-next-hop (NNHOP) backup tunnels because they terminate at the node following the next-hop node of the LSP paths, thereby bypassing the next-hop node. They protect LSPs if a node along their path fails by enabling the node upstream of the failure to reroute the LSPs and their traffic around the failed node to the next-next hop. FRR supports the use of RSVP Hellos to accelerate the detection of node failures. NNHOP backup tunnels also provide protection from link failures, because they bypass the failed link as well as the node.

This section shows you how to add FRR protection to a network in which MPLS TE LSPs are configured.

The following sections describe how to use FRR to protect LSPs in your network from link or node failures. Each task is identified as either required or optional.

Enabling BFD Support on the Router

LSPs can use backup tunnels only if the LSPs have been configured as fast reroutable. To enable FRR on the LSP, enter the following commands at the headend of each LSP.

To create a backup tunnel to the next hop or to the next-next hop, perform the following task.

Enter the commands on the node that will be the headend of the backup tunnel (that is, the node whose downstream link or node may fail). The node on which you enter the commands must be a supported platform. See the Finding Feature Information section.

Creating a backup tunnel is basically no different from creating any other tunnel.

To assign one or more backup tunnels to a protected interface, perform the following task.

Enter the commands on the node that will be the headend of the backup tunnel (that is, the node whose downstream link or node may fail). The node on which you enter the commands must be a supported platform. See the Finding Feature Information section.

Enabling BFD on the Protected Interface

Associating Backup Bandwidth and Pool Type with a Backup Tunnel

Verifying That Fast Reroute Is Operational

The examples in this section are based on the backup tunnels shown in the figure below. 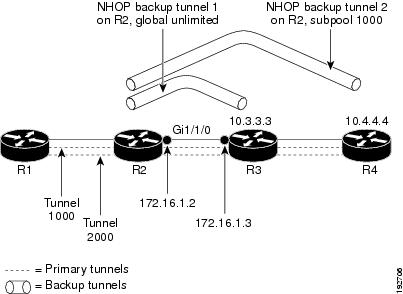 The following example enables the BFD protocol on the router:

On router R1 in the figure above, enter interface configuration mode for each tunnel to be protected (Tunnel 1000 and Tunnel 2000). Enable these tunnels to use a backup tunnel in case of a link or node failure along their paths.

Tunnel 1000 will use ten units of bandwidth from the subpool.

Tunnel 2000 will use five units of bandwidth from the global pool. The "bandwidth protection desired" bit and the "node protection desired bit" have been set by specifying bw-prot and node-prot, respectively, in the tunnel mpls traffic-eng fast-reroute command.

Example Creating a Backup Tunnel to the Next Hop

On router R2 in the figure above, both backup tunnels are associated with interface Gigabit Ethernet 0/1/0:

In the figure above, BFD is enabled on interface Gigabit Ethernet 2/1/1:

backup tunnel --An MPLS TE tunnel used to protect other (primary) tunnels' traffic when a link or node failure occurs.

bandwidth --The available traffic capacity of a link.

fast reroute --Procedures that enable temporary routing around a failed link or node while a new LSP is being established at the headend.

headend --The router that originates and maintains a given LSP. This is the first router in the LSP's path.

hop --Passage of a data packet between two network nodes (for example, between two routers).

LSP --label-switched path. A configured connection between two routers, in which label switching is used to carry the packets. The purpose of an LSP is to carry data packets.

NHOP --next hop. The next downstream node along an LSP's path.

primary tunnel --Tunnel whose LSP may be fast rerouted if there is a failure. Backup tunnels cannot be primary tunnels.

protected interface --An interface that has one or more backup tunnels associated with it.

RSVP --Resource Reservation Protocol. An IETF protocol used for signaling requests (setting up reservations) for Internet services by a customer before that customer is permitted to transmit data over that portion of the network.

state --Information that a router must maintain about each LSP. The information is used for rerouting tunnels.

subpool --The more restrictive bandwidth in an MPLS traffic engineering link or node. The subpool is a portion of the link or node's overall global pool bandwidth.

tailend --The router upon which an LSP is terminated. This is the last router in the LSP's path.