Some slight differences between the IETF draft MIB and the actual implementation of MPLS VPNs within Cisco software require some minor translations between the MPLS VPN MIB and the internal data structures of Cisco software. These translations are accomplished by means of the SNMP agent code. Also, while running as a low priority process, the SNMP agent provides a management interface to Cisco software. SNMP adds little overhead on the normal functions of the device.

All MPLS VPN MIB objects are based on the IETF draft MIB; thus, no specific Cisco SNMP application is required to support the functions and operations pertaining to the MPLS VPN SNMP Notifications feature.

This section contains the following information about the Cisco implementation of the MPLS VPN MIB:

The following functionality is supported in this release for the MPLS VPN SNMP Notifications feature. This feature provides you with the ability to do the following:

The following notifications of the MPLS VPN MIB are implemented for this release: 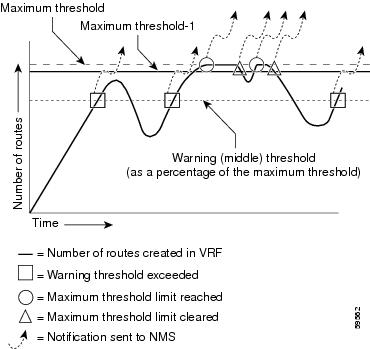 Each notification also contains two additional objects from the MPLS-VPN-MIB. These objects provide additional information about the event, as follows:

To monitor MPLS-VPN-MIB notification messages, log in to an NMS that supports a utility that displays SNMP notifications, and start the display utility.

How to Configure the MPLS VPN SNMP Notifications

Perform this task to configure an SNMP community.

Perform this task to configure the device to send traps to a host.

(See the figure above for an example of how this notification works and for a comparison of the maximum and warning thresholds.)

Verify that the SNMP master agent is enabled for the MPLS VPN SNMP Notifications feature:

The following example shows you how to enable the device to send MPLS VPN notifications to host 172.20.2.160 using the comaccess community string if a VRF transitions from a down state to an up state or from an up state to a down state.

CE device—customer edge router. A router on the border between a VPN provider and a VPN customer that belongs to the customer.

community—In SNMP, a logical group of managed devices and NMSs in the same administrative domain.

community string—Text string that acts as a password and is used to authenticate messages sent between a managed station and a router containing an SNMP agent. The community string is sent in every packet between the manager and the client. Also called a community name.

ISOC—Internet Society. International nonprofit organization, founded in 1992, that coordinates the evolution and use of the Internet. In addition, ISOC delegates authority to other groups related to the Internet, such as the IAB. ISOC is headquartered in Reston, Virginia (United States).

LDP —label distribution protocol. A standard protocol between MPLS-enabled routers that is used for the negotiation of the labels (addresses) used to forward packets.

LFIB —label forwarding information base. In the Cisco Label Switching system, the data structure for storing information about incoming and outgoing tags (labels) and associated equivalent packets suitable for labeling.

LSR —label switch router. A device that forwards MPLS packets based on the value of a fixed-length label encapsulated in each packet.

MPLS —Multiprotocol Label Switching. A method for forwarding packets (frames) through a network. It enables routers at the edge of a network to apply labels to packets (frames). ATM switches or existing routers in the network core can switch packets according to the labels with minimal lookup overhead.

For an MPLS VPN Solution, an MPLS VPN is a set of PEs that are connected by means of a common “backbone” network to supply private IP interconnectivity between two or more customer sites for a given customer. Each VPN has a set of provisioning templates and policies and can span multiple provider administrative domains (PADs).

notification —A message sent by an SNMP agent to a network management station, console, or terminal to indicate that a significant event within Cisco software has occurred. See also trap.

NMS —network management system. A powerful, well-equipped computer (typically an engineering workstation) that is used by a network administrator to communicate with other devices in the network. An NMS is typically used to manage network resources, gather statistics, and perform a variety of network administration and configuration tasks.

PE device—provider edge router. A router on the border between a VPN provider and a VPN customer that belongs to the provider.

QoS —quality of service. Measure of performance for a transmission system that reflects its transmission quality and service availability.

traffic engineering—The techniques and processes used to cause routed traffic to travel through the network on a path other than the one that would have been chosen if standard routing methods had been used.

trap —A message sent by an SNMP agent to a network management station, console, or terminal, indicating that a significant event occurred. Traps (notifications) are less reliable than inform requests, because the receiver does not send an acknowledgment when it receives a trap. The sender cannot determine if the trap was received. See also notification.

VPN —Virtual Private Network. A group of sites that, as the result of a set of administrative policies, are able to communicate with each other over a shared backbone network. See MPLS VPN.