Routing Information Protocol (RIP) is a commonly used routing protocol in small to medium TCP/IP networks. It is a stable protocol that uses a distance-vector algorithm to calculate routes.

Routing Information Protocol uses broadcast User Datagram Protocol (UDP) data packets to exchange routing information. Cisco IOS software sends routing information updates every 30 seconds, which is termed advertising.If a router does not receive an update from another router for 180 seconds or more, it marks the routes served by the nonupdating router as being unusable. If there is still no update after 240 seconds, the router removes all routing table entries for the nonupdating router.

RIP sends routing-update messages at regular intervals and when the network topology changes. When a router receives a RIP routing update that includes changes to an entry, the router updates its routing table to reflect the new route. The metric value for the path is increased by 1, and the sender is indicated as the next hop. RIP routers maintain only the best route (the route with the lowest metric value) to a destination. After updating its routing table, the router immediately begins transmitting RIP routing updates to inform other network routers of the change. These updates are sent independently of the regularly scheduled updates that RIP routers send.

RIP uses a single routing metric (hop count) to measure the distance between the source and a destination network. Each hop in a path from source to destination is assigned a hop count value, which is typically 1. When a router receives a routing update that contains a new or changed destination network entry, the router adds 1 to the metric value indicated in the update and enters the network in the routing table. The IP address of the sender is used as the next hop. If the network of an interface network is not specified, it will not be advertised in any RIP update.

The key chain determines the set of keys that can be used on the interface. If a key chain is not configured, no authentication is performed on that interface, not even the default authentication. Therefore, you must also perform the tasks in the section "Managing Authentication Keys" in the "Configuring IP Routing Protocol-Independent Features" module.

RIP is normally a broadcast protocol, and in order for RIP routing updates to reach nonbroadcast networks, you must configure the Cisco IOS software to permit this exchange of routing information.

To control the set of interfaces with which you want to exchange routing updates, you can disable the sending of routing updates on specified interfaces by configuring the passive-interface router configuration command. See the discussion on filtering in the "Filter Routing Information" section in the "Configuring IP Routing Protocol-Independent Features" module.

An offset list is the mechanism for increasing incoming and outgoing metrics to routes learned via RIP. Optionally, you can limit the offset list with either an access list or an interface. To increase the value of routing metrics, use the following command in router configuration mode:

Routing protocols use several timers that determine such variables as the frequency of routing updates, the length of time before a route becomes invalid, and other parameters. You can adjust these timers to tune routing protocol performance to better suit your internetwork needs. You can make the following timer adjustments:

It also is possible to tune the IP routing support in the software to enable faster convergence of the various IP routing algorithms, and, hence, quicker fallback to redundant routers. The total effect is to minimize disruptions to end users of the network in situations where quick recovery is essential

See the "Address Family Timers Example" section at the end of this chapter for examples of adjusting timers for an address family (VRF).

Summarizing routes in RIP Version 2 improves scalability and efficiency in large networks. Summarizing IP addresses means that there is no entry for child routes (routes that are created for any combination of the individual IP addresses contained within a summary address) in the RIP routing table, reducing the size of the table and allowing the router to handle more routes.

The ip summary-address rip routerconfiguration command causes the router to summarize a given set of routes learned via RIP Version 2 or redistributed into RIP Version 2. Host routes are especially applicable for summarization.

See the "Route Summarization Example" section at the end of this chapter for examples of using split horizon.

Normally, routers that are connected to broadcast-type IP networks and that use distance-vector routing protocols employ the split horizon mechanism to reduce the possibility of routing loops. Split horizon blocks information about routes from being advertised by a router out of any interface from which that information originated. This behavior usually optimizes communications among multiple routers, particularly when links are broken. However, with nonbroadcast networks (such as Frame Relay and Switched Multimegabit Digital System [SMDS]), situations can arise for which this behavior is less than ideal. For these situations, you may want to disable split horizon with RIP.

By default, the software adds no delay between packets in a multiple-packet RIP update being sent. If you have a high-end router sending to a low-speed router, you might want to add such interpacket delay to RIP updates, in the range of 8 to 50 milliseconds.

Routers are used on connection-oriented networks to allow potential connectivity to many remote destinations. Circuits on the WAN are established on demand and are relinquished when the traffic subsides. Depending on the application, the connection between any two sites for user data could be short and relatively infrequent.

Without neighbor authentication, unauthorized or deliberately malicious routing updates could compromise the security of your network traffic. A security compromise could occur if an unfriendly party diverts or analyzes your network traffic. For example, an unauthorized router could send a fictitious routing update to convince your router to send traffic to an incorrect destination. This diverted traffic could be analyzed to learn confidential information about your organization or merely used to disrupt your organization’s ability to effectively communicate using the network. Neighbor authentication prevents any such fraudulent route updates from being received by your router.

When neighbor authentication has been configured on a router, the router authenticates the source of each routing update packet that it receives. This is accomplished by the exchange of an authenticating key (sometimes referred to as a password) that is known to both the sending and the receiving router.

In plain text authentication, each participating neighbor router must share an authenticating key. This key is specified at each router during configuration. Multiple keys can be specified with some protocols; each key must then be identified by a key number.

In general, when a routing update is sent, the following authentication sequence occurs:

MD5 authentication works similarly to plain text authentication, except that the key is never sent over the wire. Instead, the router uses the MD5 algorithm to produce a "message digest" of the key (also called a "hash"). The message digest is then sent instead of the key itself. This ensures that nobody can eavesdrop on the line and learn keys during transmission.

Another form of neighbor router authentication is to configure key management using key chains. When you configure a key chain, you specify a series of keys with lifetimes, and the Cisco IOS software rotates through each of these keys. This decreases the likelihood that keys will be compromised. To find complete configuration information for key chains, refer to the "Managing Authentication Keys" section in the Configuring IP Routing Protocol-Independent Features module of the Cisco IOS IP Routing: Protocol-Independent Configuration Guide.

The differences in vendor implementations of MD5 authentication for RIPv2 are probably a result of the ambiguity of the relevant RFC (RFC 2082) with regards to packet loss. RFC 2082 suggests that routers should be ready to accept either a sequence number of 0 or a sequence number higher than the last sequence number received. For more information about MD5 message reception for RIPv2, see section 3.2.2 of RFC 2082 at the following url: http://www.ietf.org/rfc/rfc2082.txt .

Routing protocols use several timers that determine such variables as the frequency of routing updates, the length of time before a route becomes invalid, and other parameters. You can adjust these timers to tune routing protocol performance to better suit your internetwork needs. You can make the following timer adjustments:

It also is possible to tune the IP routing support in the software to enable faster convergence of the various IP routing algorithms, and, hence, quicker fallback to redundant routers. The total effect is to minimize disruptions to end users of the network in situations where quick recovery is essential.

How to Configure RIP

Perform the steps in this section to enable RIP and to configure RIP parameters.

Perform this task to specify a RIP version and enable authentication.

To enable or disable split horizon, use the following commands in interface configuration mode, as needed.

Perform this task to disable the default function that validates the source IP addresses of incoming routing updates.

Perform this to configure interpacket delay.

There are two problems when RIP is not optimized:

To overcome these limitations, triggered extensions to RIP cause RIP to send information on the WAN only when there has been an update to the routing database. Periodic update packets are suppressed over the interface on which this feature is enabled. RIP routing traffic is reduced on point-to-point, serial interfaces. Therefore, you can save money on an on-demand circuit for which you are charged for usage. Triggered extensions to RIP partially support RFC 2091, Triggered Extensions to RIP to Support Demand Circuits .

Perform the following task to enable triggered extensions to RIP and to display the contents of the RIP private database.

The tasks in this section explain how to configure a router to use the IP-RIP Delay Start feature on a Frame Relay interface.

Your router must be running Cisco IOS Release 12.4(12) or a later release.

The IP-RIP Delay Start feature is required only when your Cisco router is configured to establish a RIPv2 neighbor relationship with a non-Cisco device and you want to use MD5 neighbor authentication.

This required task configures RIPv2 on the router.

This task provides instructions for only one of the many possible permutations for configuring RIPv2 on your router.

This required task configures a serial subinterface for Frame Relay.

This required task configures IP, MD5 authentication for RIPv2 and the IP-RIP Delay Start feature on a Frame Relay subinterface.

The following configuration shows a simple example of disabling split horizon on a serial link. In this example, the serial link is connected to an X.25 network.

In the next example, the figure below illustrates a typical situation in which the no ip split-horizon interface configuration command would be useful. This figure depicts two IP subnets that are both accessible via a serial interface on Router C (connected to a Frame Relay network). In this example, the serial interface on Router C accommodates one of the subnets via the assignment of a secondary IP address. 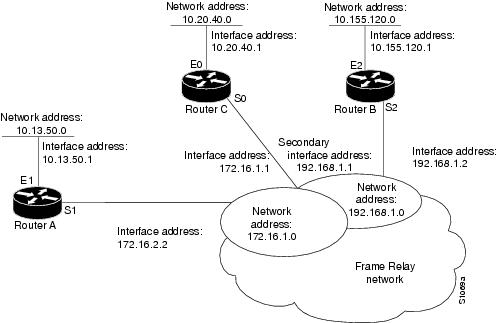 Configuration for Router A

Configuration for Router B

This excerpt from a router configuration file contains the minimum commands required to configure the IP-RIP Delay Start feature on your router.

address family --A group of network protocols that share a common format of network address. Address families are defined by RFC 1700.