This document describes the installation of a release key to a Cisco Expressway Series device via the web interface and the Command Line Interface (CLI).

Have Installed successfully the Expressway and applied a valid IP address that is reachable via web interface and or CLI.

Have applied for and received a release key valid for the Expressway serial number.

Have access to the Expressway with both root (by CLI) and an admin account by web interface or CLI.

Have downloaded an Expressway software upgrade image from Cisco.com.

---Alternatively, you could use any terminal emulation software that supports SSH such as Secure CRT, TeraTerm, and so on.

---You can use any client that supports SCP.

Licensing email with a Release Key or Upgrade Key.

A web browser. In this example, Firefox is used, Internet Explorer and Chrome work equally as well.

Here you have two options:

Option one, you can set the release key.

Option two, you can add the release key as part of the upgrade process.

Either option works and we show the set option first followed by the upgrade option next.

Option one shows the set option.

Step 1: Once you have installed your Expressway, have your serial number, and applied for your release key use your PAK and serial number, you receive a license email from the Cisco licensing team which can or can not contain a release key, and option keys.

Note: The example email is for a VCS, this is ok, the email for an Expressway Series looks the same.

Note: Examples of PAK are outside the scope of this document. 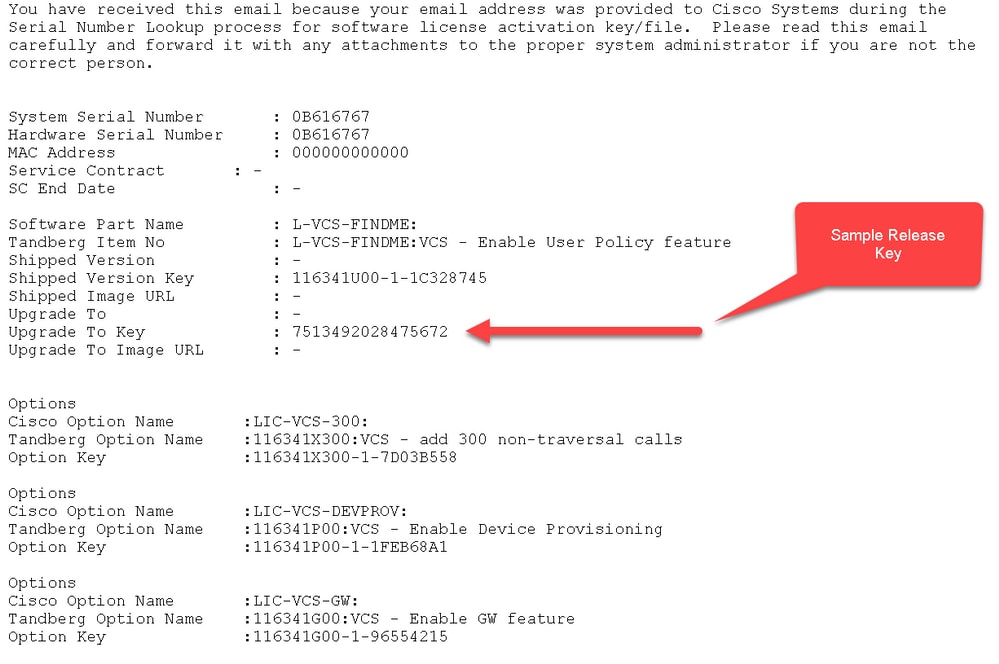 Step 2: Access the web interface of the Expressway with a web browser. Log in with an admin account and you are taken to the Expressway Status screen.

Note: Some digits are purposely blurred throughout this document. 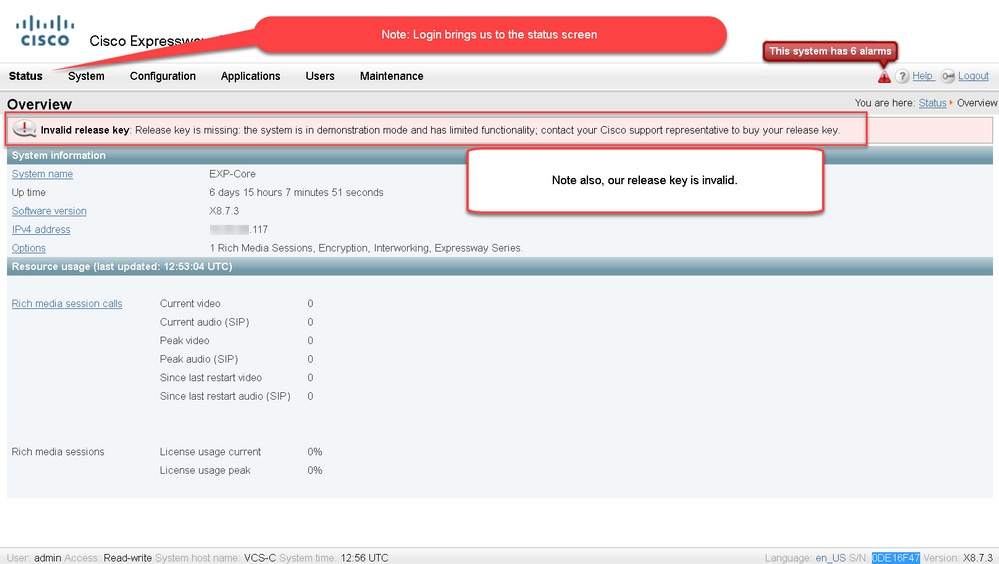 Step 3: Navigate to the appropriate screen in order to install your release key. Hover over the maintenance tab. 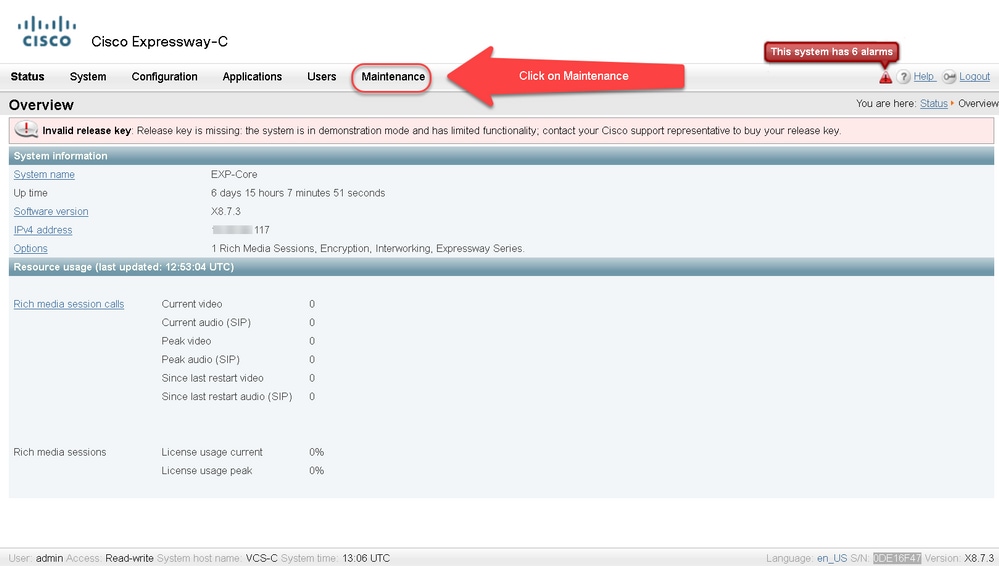 Step 4: When the menu pops up, click Option Keys. 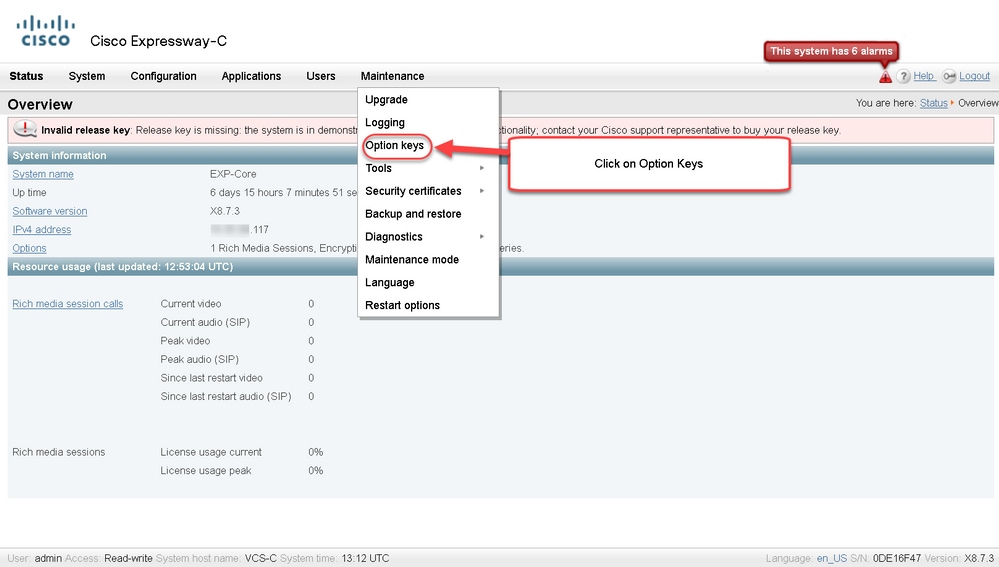 Copy and paste your release key into the Release key field: 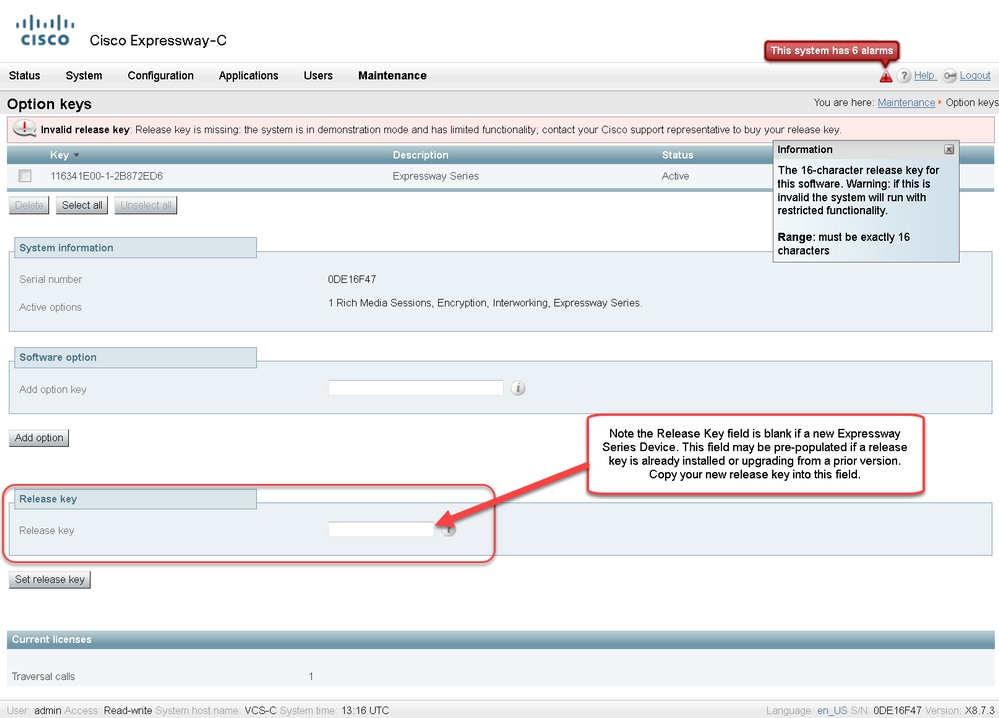 Step 6: You can see the release key pasted into the Release key field. 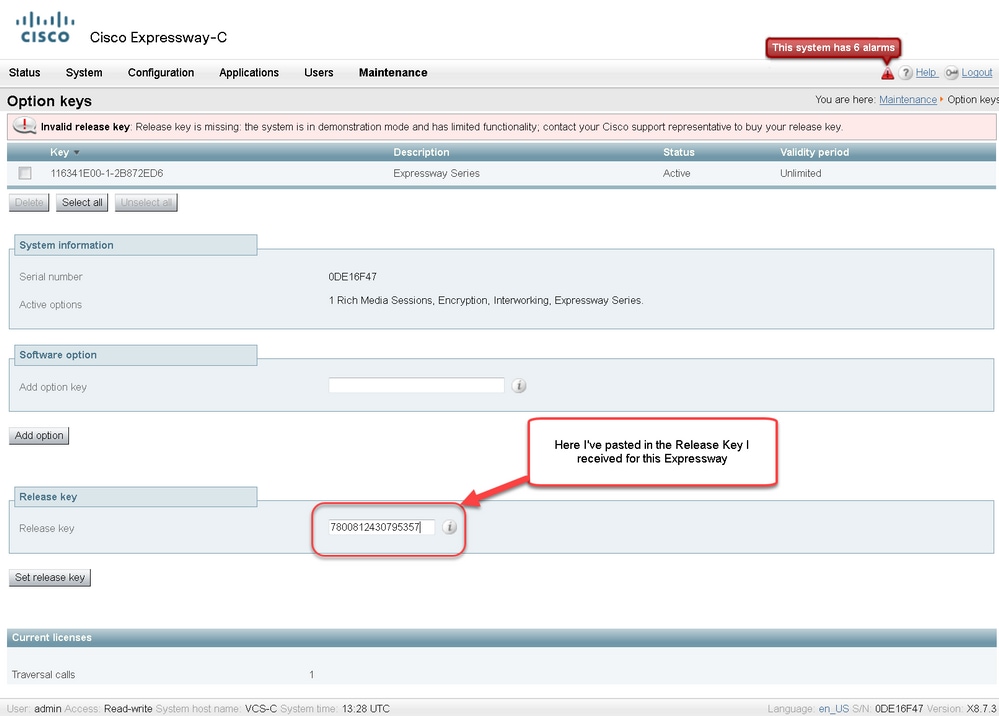 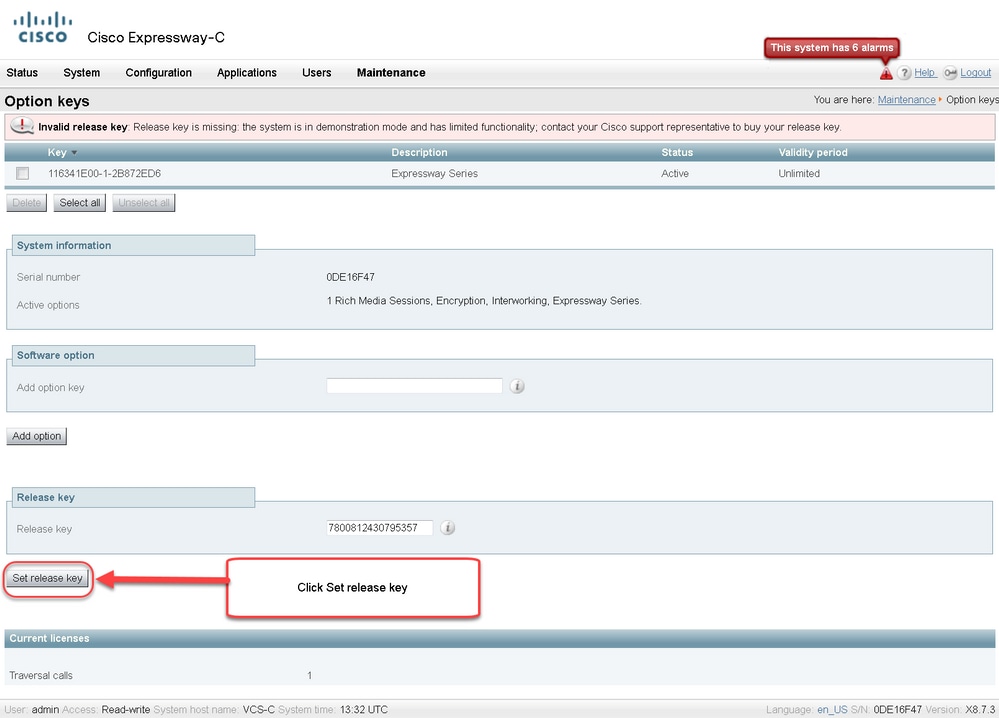 Step 8: Click the restart hyperlink in the prompt that appears at the top of the page to restart the Expressway. 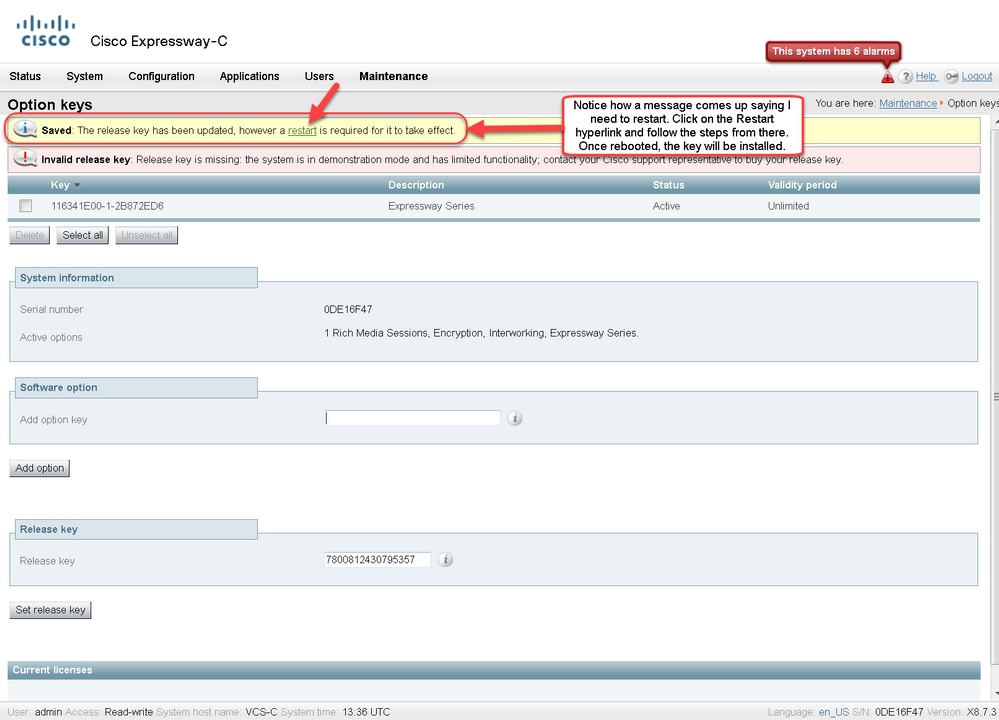 Step 1: From the Web interface, Click Maintenance as before and then Upgrade in the menu pop-up. 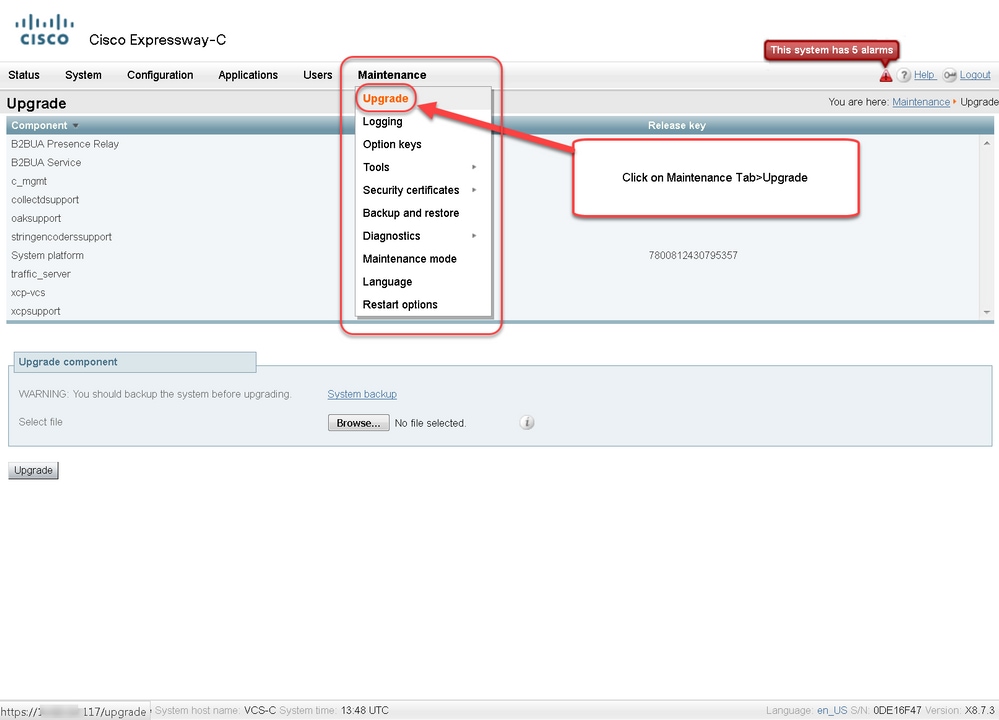 Step 2: On the Upgrade screen, you see an Upgrade Component section.

Note: This document assumes you have downloaded an Expressway software upgrade image to your local computer. 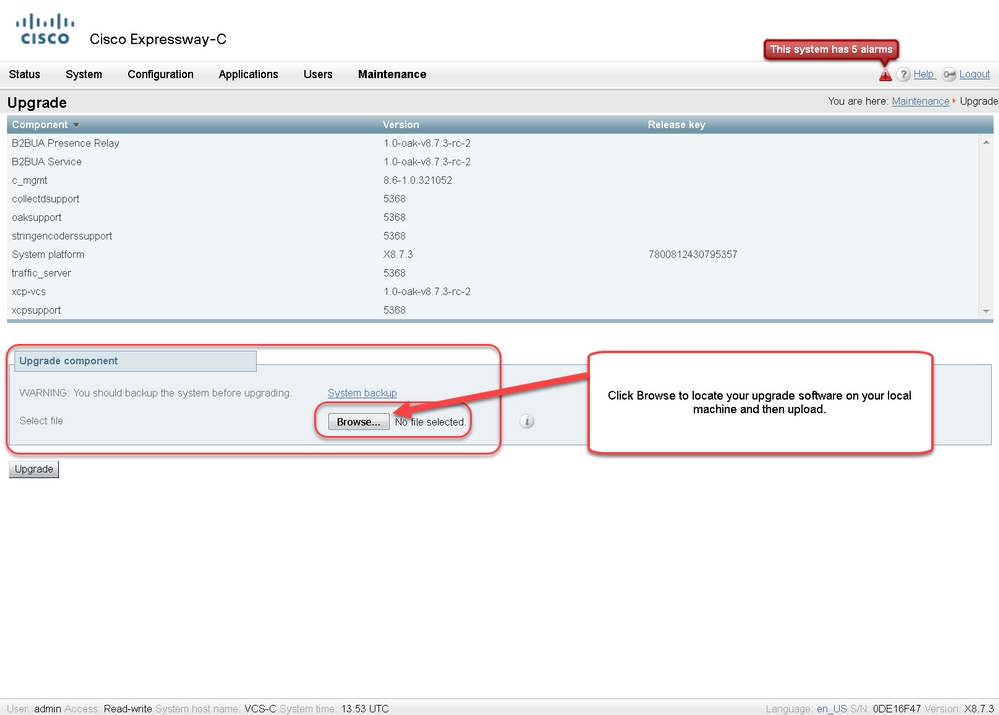 Step 3: Enter the release key value into the Release key field when prompted. Copy and paste from the email or if this is a minor upgrade such as in this case, x8.7.3 to x8.8.3, copy and paste it from the same screen. 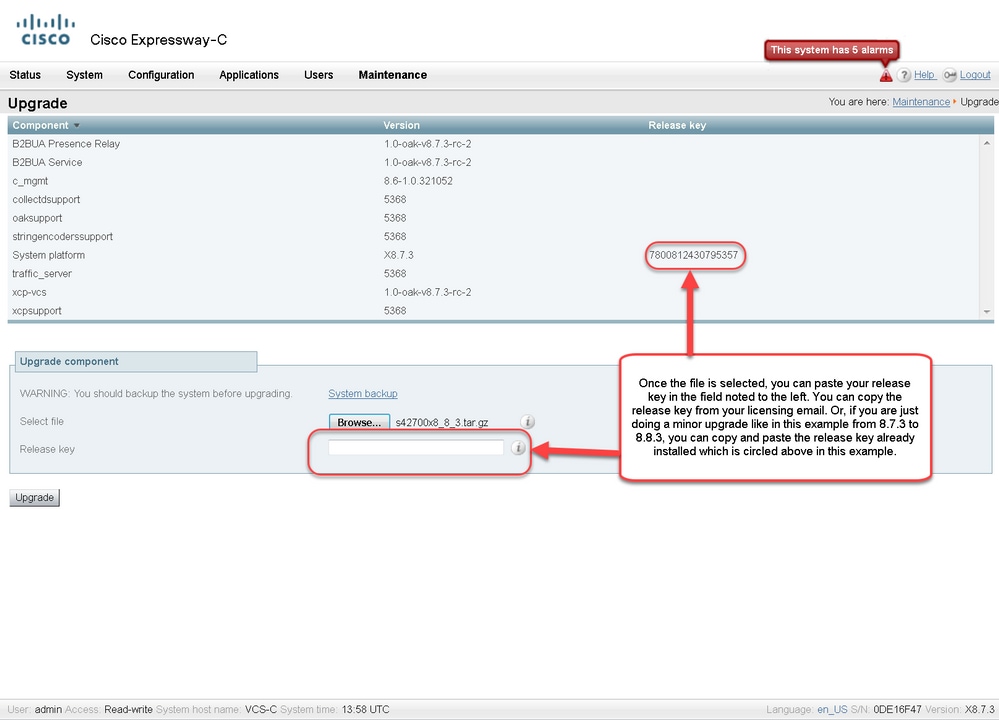 Step 4: Click the Upgrade button. Watch the process that follows and do not navigate away from the process, or you have to start over. The image is uploaded, then it is been installed. Click restart when prompted. 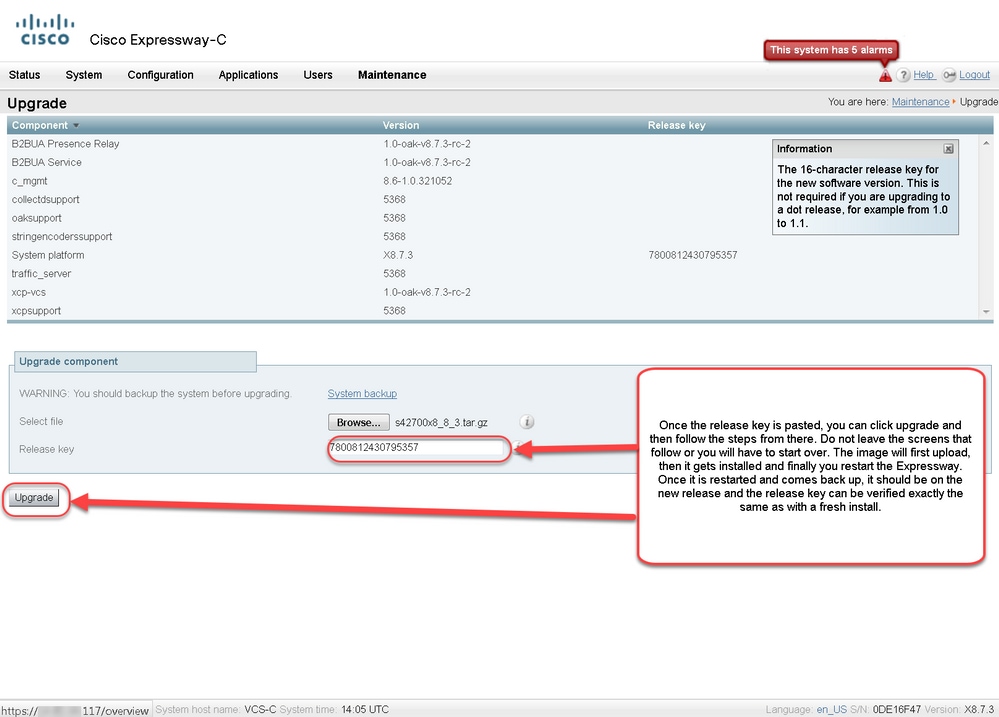 Verify the release has been installed properly, once the Expressway has restarted. Use the two methods noted in the Verify section of this document.

Install a release key via the CLI. This is a two-part process that involves the use of an SCP client (PSCP in this example from command (CMD) prompt in Windows and a terminal emulation software application such as PuTTY. 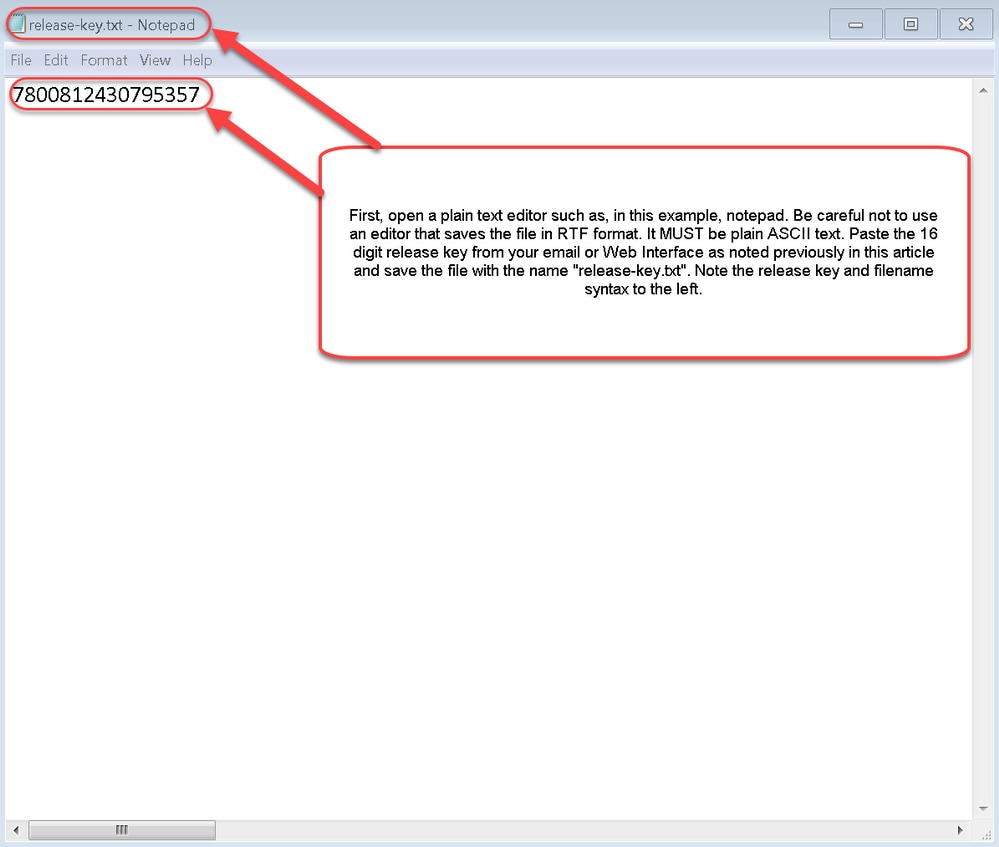 Step 2: Place the release-key.txt file and PSCP.exe in the same directory on your computer. Navigate to that directory with a command (CMD) prompt in Windows and copy the release key to a temp directory on the Expressway. Use the root account for the PSCP transaction. Enter the root account password when prompted. Verify the transfer completed as indicated by 100%. Here is an example:

Step 3: Copy the image you want to upgrade to, such as 8.8.3 used here. Copy this image over PSCP. Verify the status shows at 100%, which means the software of the image has been transferred over to the Expressway and you are ready to reboot the Expressway. 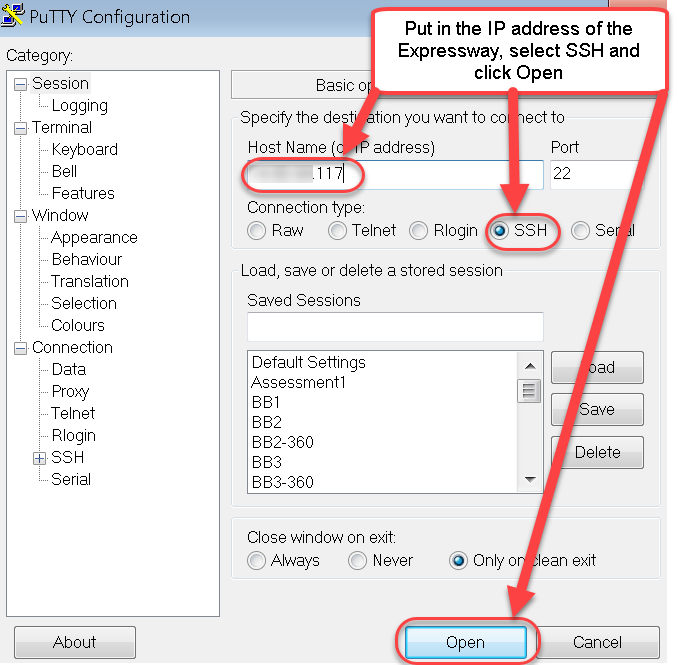 The Expressway flashes that it is in reboot process and your PuTTY session closes. This behavior is normal because the connection is terminated when the Expressway reboots. The Expressway takes about three to five minutes to reboot. Once complete, verify the release key installed correctly either via the web interface or the CLI as noted in the Verify section of this document.

There are two ways you can verify the Release Key installed in the web interface:

Option 1: Look at the Options Key Page as noted previously and check the Release key field. 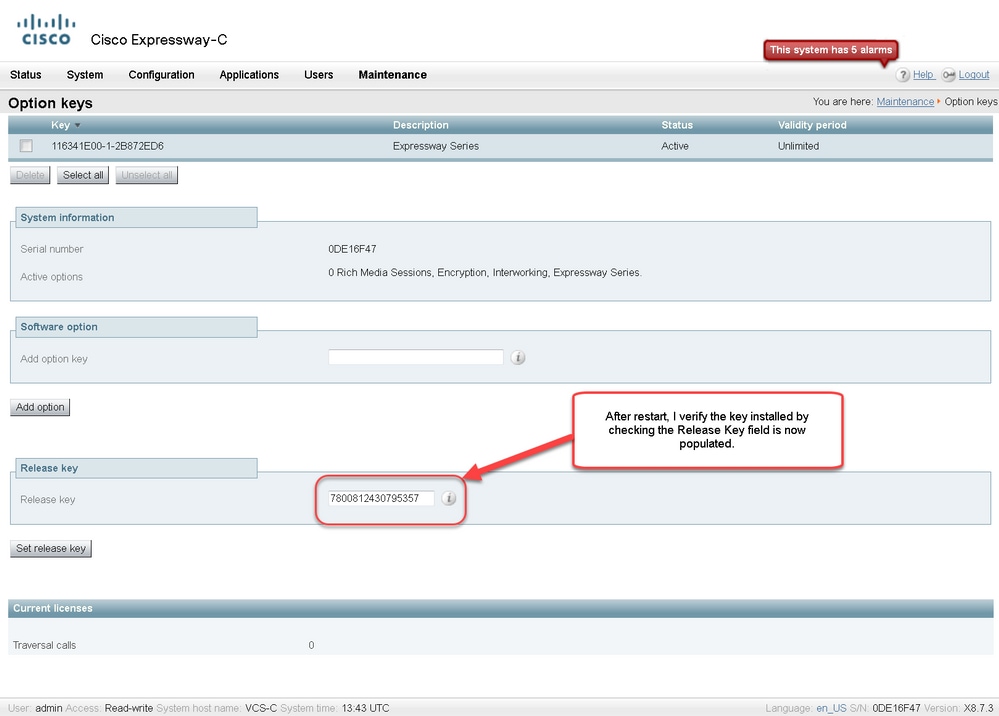 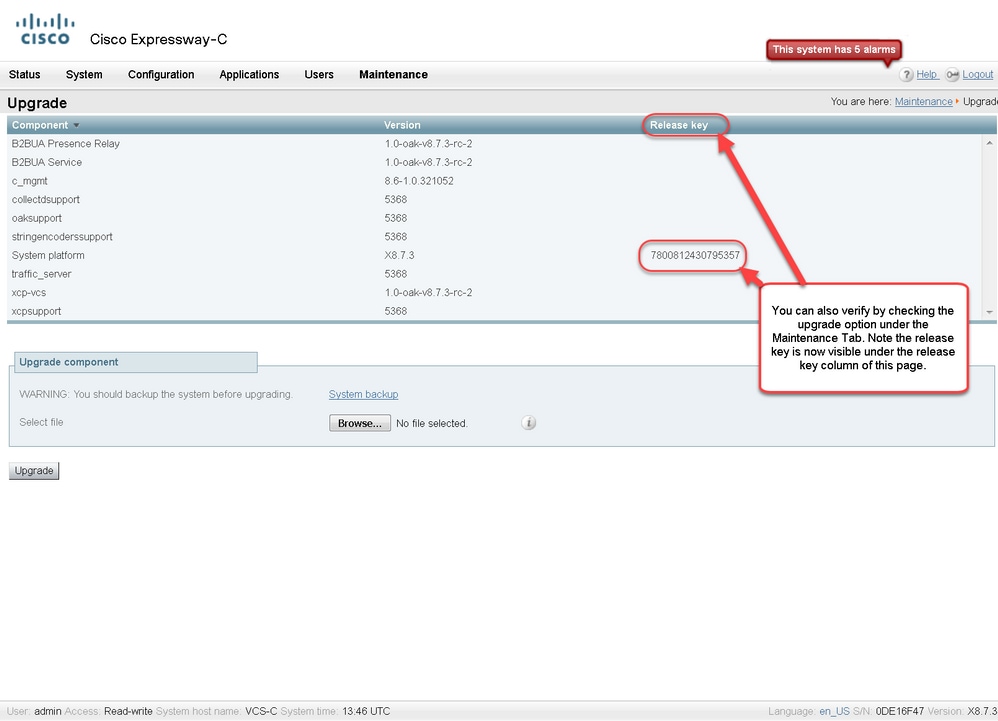 Verify the Release Key installed via the CLI interface by an SSH session to the CLI. Log in with an admin account as noted previously in this document. Once there, you enter the command xStatus SystemUnit Software. You observe the upgrade was successful and the release key is installed: 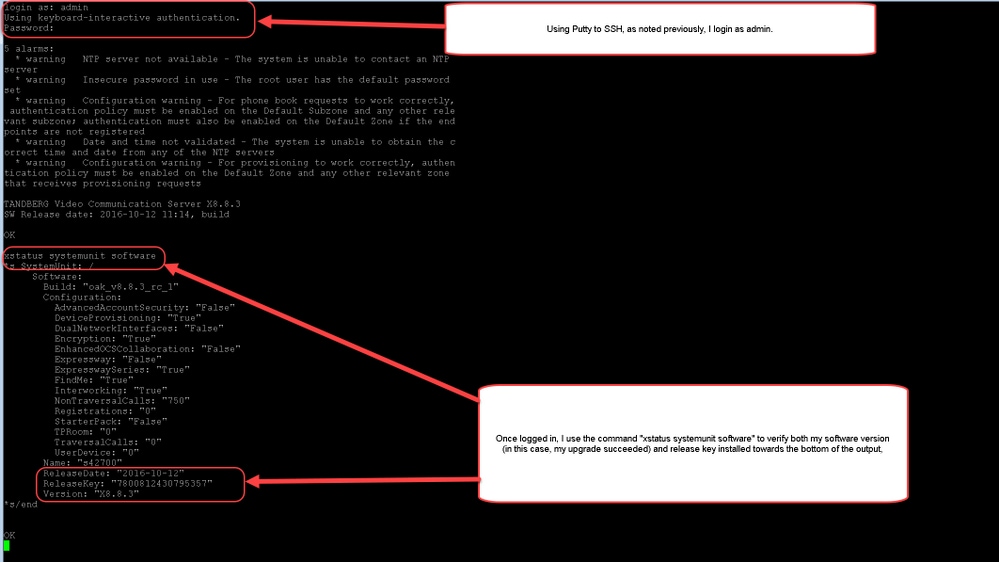 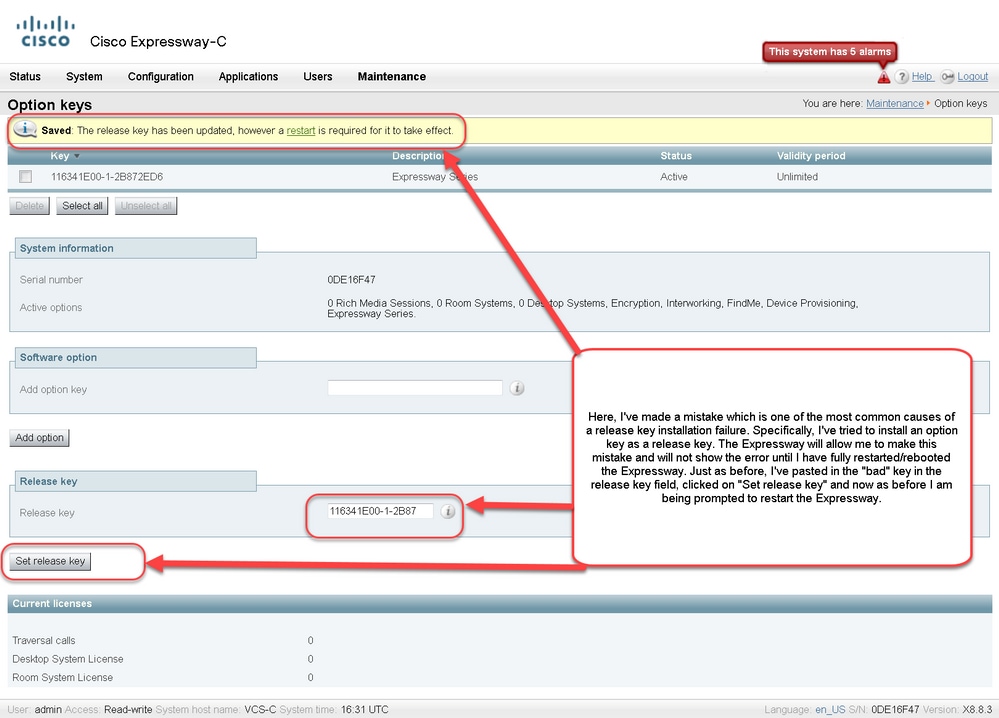 An Expressway accepts any value in the Release key field. Reboot the Expressway with an incorrect value entered and you receive an error "Invalid release key": 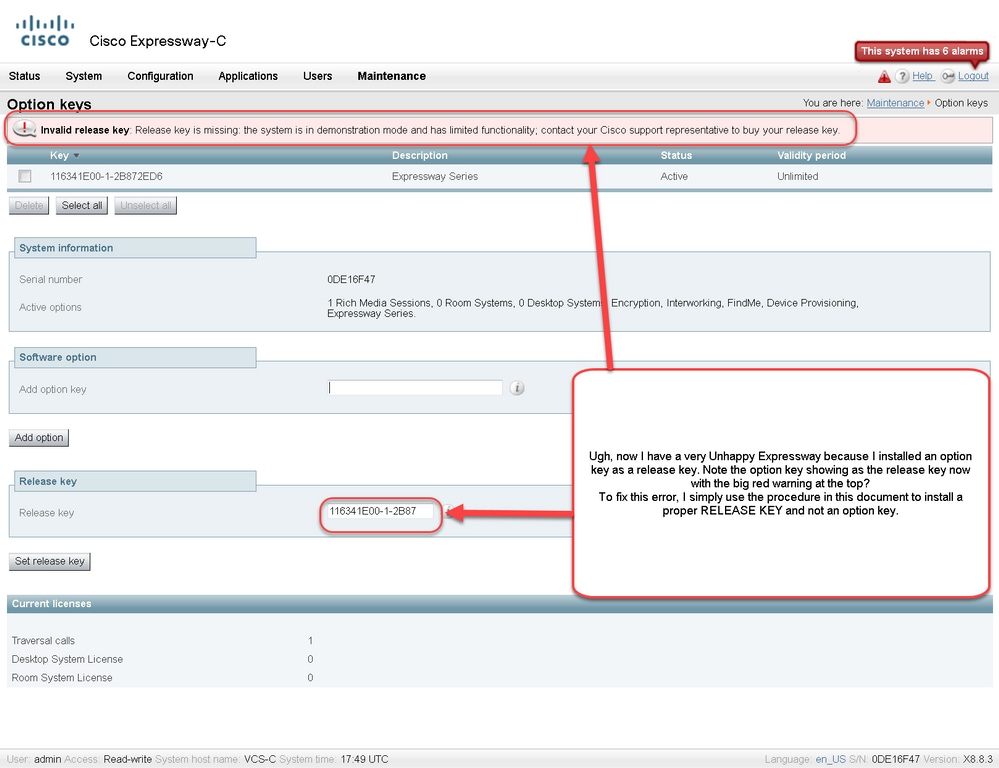 Install a release key as noted in this document to correct this condition.

Note: The release keys and option keys are tied to the serial number seen on the bottom right corner of the web interface, if the serial changes (which can happen with hardware changed of the virtual machine) the release key and options would need to be re-generated and re-installed)

Engage Cisco TAC for assistance for any other types of failure.