Multiple Spanning Tree Instance (MSTI) Settings allow you to configure and view parameters per MST Instance. The Common Instance Spanning Tree (CIST) is always MSTI ID0. Each MST Instance is identified by a number. Each instance of an MSTI can be numbered for 1 through 64 and these IDs are local to each region.

The objective of this document is to explain the configuration of MSTP Instance Settings on Sx500 Series Stackable Switches.

Note: Before the instance configuration of MSTP, you should choose the Multiple STP mode of operation. Refer to the article Spanning Tree Protocol (STP) Configuration on Sx500 Series Stackable Switches for more information. 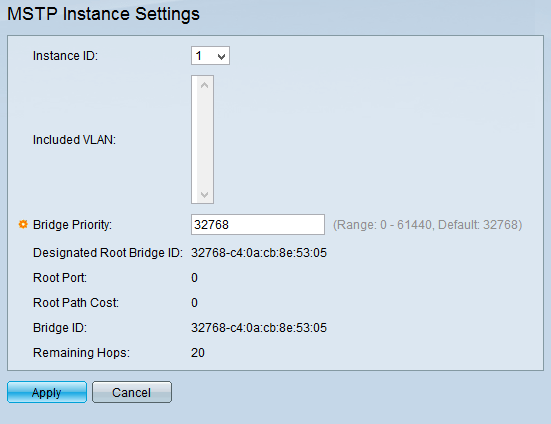 Step 2. Choose an MSTP instance to be shown and defined from the Instance ID drop-down list. 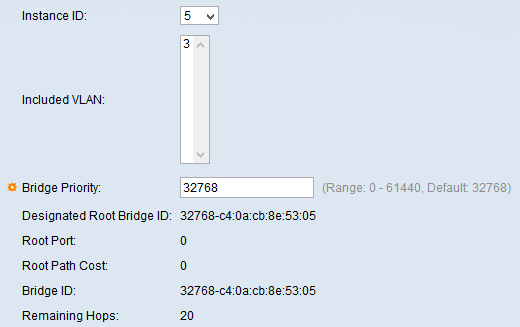 Note: The included VLAN for the chosen instance is displayed in the Included VLAN field. To map VLANs to an MSTI refer to the article Configuration of VLAN to MSTP (MSTP) Instance on Sx500 Series Stackable Switches. 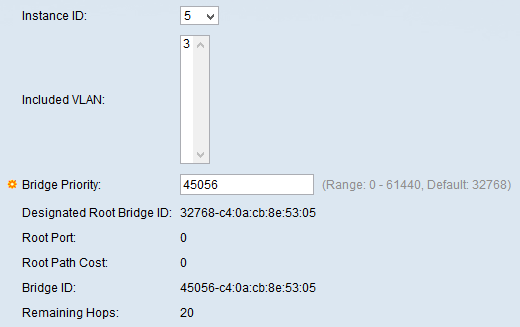 Step 3. Enter the priority of the bridge in the Bridge Priority field. A Root Bridge is the bridge that becomes the master of the network and is in charge of all the other decisions such as which port needs to be blocked and which port needs to be in the forward mode. The bridge with lower priority is chosen as the root bridge. If there are bridges with the same priority then the MAC addresses are compared and the bridge with lowest MAC address becomes the Root Bridge. The bridge priority value should be in increments of 4096.

The following information is displayed:

• Designated Root Bridge — The priority and the MAC address of the root bridge for the MSTI.

• Bridge ID — The priority and MAC address of the switch for the MSTI.

• Remaining Hops — Number of hops until the next destination.