Spanning Tree Protocol (STP) protects Layer 2 broadcast domains from broadcast storms. It sets the links to standby mode to prevent loops. Loops occur when alternate routes exist between hosts. These loops in an extended network can cause Layer 2 switches to forward traffic an infinite amount of times, which results in an increased traffic load and lower network efficiency. STP provides a tree topology for any arrangement of Layer 2 switches and links by creating a unique path between end stations on a network. These individual paths eliminate the possibility of loops.

The user in a real time scenario can configure STP to prevent loops and thereby prevent a lot of traffic flow back and forth in the network.

This document explains how to configure STP on Sx500 Series Stackable Switches. 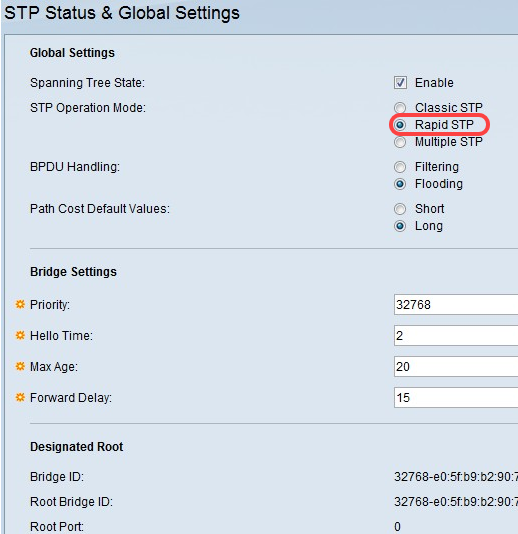 Step 2. Click the radio button that corresponds to the desired operating mode for STP in the STP Operation Mode field.

• Classic STP — Provides a single path between any two end stations which avoids and eliminates loops.

• Multiple STP — Detects Layer 2 loops and attempts to mitigate them by preventing the involved port from transmitting traffic. MSTP enables several STP instances so that it is possible to detect and mitigate loops separately in each instance. MSTP provides full connectivity for packets allocated to any VLAN. In addition, MSTP transmits packets assigned to various VLANs through different multiple spanning tree (MST) regions.

Step 3. Click the desired radio button in the Bridge Protocol Data Unit (BPDU) Handling field. BPDU is used to transmit spanning tree information when STP is disabled on the port or the switch.

• Filtering — Filters BPDU packets when spanning tree is disabled on an interface. Only a few BPDU packets are exchanged among the switches.

• Flooding — Floods BPDU packets when spanning tree is disabled on an interface. All the BPDU packets are exchanged among all the switches.

Step 4. Click the desired radio button in the Path Cost Default Values field. It is used to assign default path costs to the STP ports. Path cost is the distance (cost) from a specific port to the root port.

Step 1. Enter the priority value in the Priority field. After the exchange of BPDUs, the device with the lowest priority becomes the Root Bridge. A Root Bridge is the bridge that becomes the active bridge of the network and is in charge of all the other decisions such as which port needs to be blocked and which port needs to be in the forward mode. In the case that all bridges use the same priority, then their MAC addresses are used to determine which one is the Root Bridge. The bridge priority value is provided in increments of 4096.

Step 2. Enter the interval (in seconds) that a Root Bridge waits between configuration messages in the Hello Time field. The range is 1 to 10 seconds.

Step 3. Enter the interval (in seconds) that the switch can wait without receiving a configuration message before it attempts to redefine its own configuration in the Max Age field. 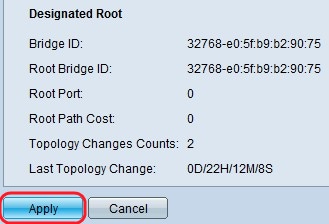 • Bridge ID — The bridge priority concatenated with the MAC address of the switch.

• Root Bridge ID — The Root Bridge priority concatenated with the MAC address of the switch.

• Root Port — The port that has the lowest cost path from this bridge to the Root Bridge.

• Root Path Cost — The cost of the path from this bridge to the root.

• Topology Changes Count — The total number of STP topology changes that have occurred.

• Last Topology Change — The time interval that has elapsed since the last topology change occurred. The time is displayed in days/hours/minutes/seconds format.