This document describes a problem related to Internet Protocol Security (IPsec) anti-replay check failures and how to troubleshoot with possible solutions.

An Overview of Replay Attacks

A replay attack is a form of network attack in which valid data transmission is maliciously or fraudulently recorded and later repeated. It is an attempt to subvert security by someone who records legitimate communications and repeats them in order to impersonate a valid user and disrupt or cause a negative impact on legitimate connections.

A sequence number that monotonically increases is assigned to each encrypted packet by IPsec to provide anti-replay protection against an attacker. The receiving IPsec endpoint keeps track of which packets it has already processed when it uses these numbers and a sliding window of acceptable sequence numbers. The default anti-replay window size in the Cisco IOS® implementation is 64 packets, as shown in this image:

When an IPsec tunnel endpoint has anti-replay protection enabled, the incoming IPsec traffic is processed as follows:

In the cases where a replay check failure occurs and the packet is dropped, the router generates a Syslog message similar to this:

Note: The replay detection is based on the assumption that the IPsec Security Association (SA) exists between only two peers. Group Encrypted Transport VPN (GETVPN) uses a single IPsec SA between many peers. As a result, GETVPN utilizes an entirely different anti-replay check mechanism called Time Based Anti-Replay Failure. This document only covers counter-based anti-replay for point-to-point IPsec tunnels.

Note: Anti-replay protection is an important security service that the IPsec protocol offers. IPsec anti-replay disabled has security implications and must be done with discretion.

Problems That Can Cause IPsec Replay Drops

As previously described, the purpose of replay checks is to protect against malicious repetitions of packets. However, there are some scenarios where a failed replay check might not be due to a malicious reason:

The key to troubleshoot IPsec replay drops is to identify which packets are dropped due to replay, and use packet captures to determine if these packets are indeed replayed packets or packets that have arrived on the receiving router outside of the replay window. In order to correctly match the dropped packets to what is captured in the sniffer trace, the first step is to identify the peer and the IPsec flow to which the dropped packets belong and the ESP sequence number of the packet.

On router platforms that run the Cisco IOS® XE, information about the peer as well as the IPsec Security Parameter Index (SPI) are printed in the Syslog message when a drop occurs, in order to help troubleshoot anti-replay problems. However, one key piece of information that still misses, is the ESP sequence number. The ESP sequence number is used in order to uniquely identify an IPsec packet within a given IPsec flow. Without the sequence number, it becomes difficult to identify exactly which packet gets dropped in a packet capture.

The Cisco IOS XE datapath packet-trace feature can be used in this situation when the replay drop is observed, with this Syslog message:

In order to help identify the ESP sequence number for the packet dropped, complete these steps with the packet tracing feature:

In addition to the identification of the packet information for the packet dropped due to replay check failure, a packet capture for the IPsec flow in question needs to be collected concurrently. This helps in the examination of the ESP sequence number pattern within the same IPsec flow to help determine the reason for the replay drop. For details on how to use the Embedded Packet Capture (EPC) on Cisco IOS XE routers, see Embedded Packet Capture for Cisco IOS and Cisco IOS XE Configuration Example.

Once the packet capture for the encrypted (ESP) packets on the WAN interface has been collected, Wireshark can be used to perform ESP sequence number analysis for any sequence number anomalies. First, ensure Sequence Number Check is enabled under Preferences > Protocols > ESP as shown in the image:

Next check for any ESP Sequence Number issues under Analyze > Expert information as follows:

Click on any of the packets with the wrong Sequence Number to get additional details as follows: 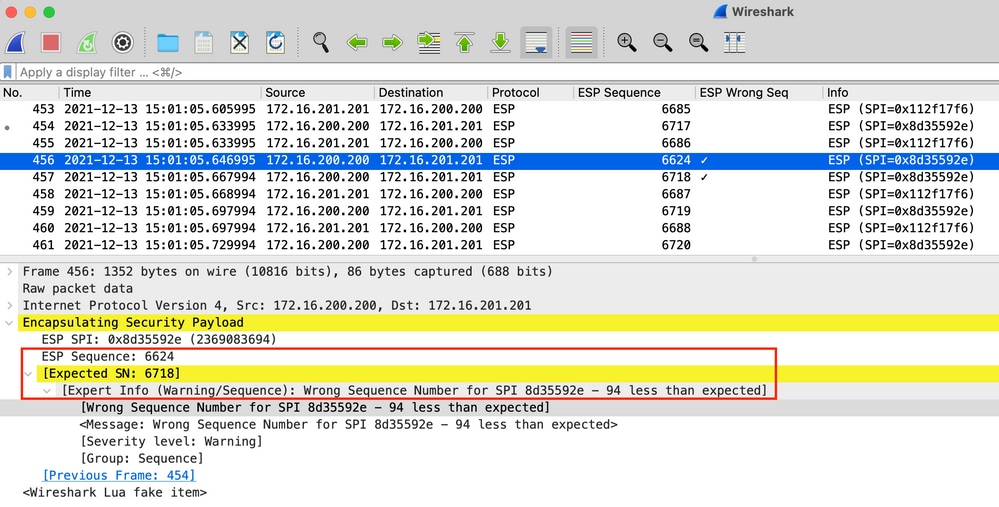 After the peer is identified and packet capture is collected for the replay drops, three possible scenarios could explain the replay failures:

Note: Replay check failures are only seen when an authentication algorithm is enabled in the IPsec transform set. Another way to suppress this error message is to disable authentication and perform encryption only; however, this is strongly discouraged due to the security implications of disabled authentication.

Note that the message output does not provide either the peer IP address or SPI information. In order to troubleshoot on this platform, use the "conn-id" in the error message. Identify the "conn-id" in the error message, and look for it in the show crypto ipsec sa output, since replay is a per-SA check (as opposed to a per-peer). The Syslog message also provides the ESP sequence number, which can help uniquely identify the dropped packet in the packet capture.

Note: With different versions of code, the "conn-id" is either the conn id or flow_id for the inbound SA.

This is illustrated here:

As can be seen from this output, the replay drop is from the 10.2.0.200 peer address with an inbound ESP SA SPI of 0xE7EDE943. It can also be noted from the log message itself that the ESP sequence number for the dropped packet is13. The combination of peer address, SPI number, and the ESP sequence number can be used in order to uniquely identify the packet dropped in the packet capture.

Note: The Cisco IOS Syslog message is rate-limited for the dataplane packet that drops to one per minute. In order to get an accurate count of the exact number of packets dropped, use the show crypto ipsec sa detail command as shown previously.

On routers that run the earlier Cisco IOS XE releases, the "REPLAY_ERROR" reported in the Syslog might not print the actual IPsec flow with the peer information where the replayed packet is dropped, as shown here:

In order to identify the correct IPsec peer and flow information, use the Data Plane (DP) Handle printed in the Syslog message as the input parameter SA Handle in this command, in order to retrieve the IPsec flow information on the Quantum Flow Processor (QFP):

An Embedded Event Manager (EEM) script can also be used to automate the data collection:

In this example, the output collected is redirected to the bootflash. In order to see this output, use the command more bootflash:replay-error.txt.