This document describes the configuration guide on how to deploy CSR1000v routers for High Availability on Amazon AWS cloud. It is aimed to give users practical knowledge of HA and the ability to deploy a fully functional testbed.

For more in depth background about AWS and HA, refer to the section.

The information in this document is based on Cisco IOS-XE® Denali 16.7.1.

In a multiple Availability Zone environment, simulate continuous traffic from the private datacenter (VM) to the internet. Simulate an HA failover and observe that HA succeeds as the routing table switches traffic from CSRHA to CSRHA1's private interface is confirmed.

Before the configuration starts, it is important to understand the topology and design completely. This helps to troubleshoot any potential issues later on.

There are various scenarios of HA deployment based on the network requirements. For this example, HA redundancy is configured with these settings:

The third zone is a VM, which simulates a device in a private datacenter. For now, internet access is enabled through the public interface on so that you can access and configure the VM. Generally, all normal traffic should flow through the private route table. 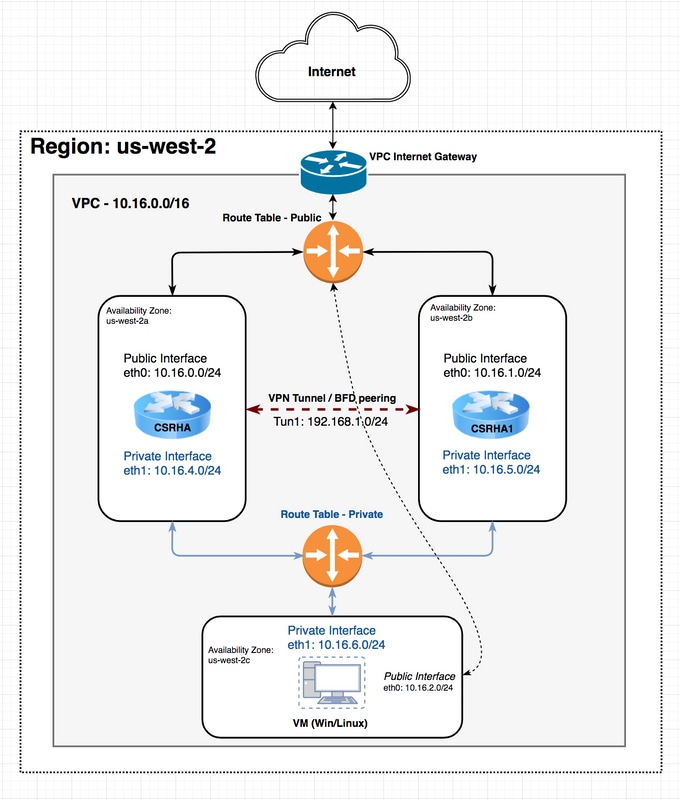 CIDR - Destination address for the route to be updated in the route table.

ENI - The network interface ID of the CSR 1000v gigabit interface to which traffic is routed.
For Example, if CSRHA fails then CSRHA1 takes over and updates the route in the AWS route table to point to its own ENI.

The general flow of configuration is to start at the top most encompassing feature (Region/VPC) and move your way down to the most specific (Interface/subnet). However, there is no specific order of configuration. Before you start, it is important to understand the topology first .

Tip: Give names to all your settings (VPC, Interface, Subnet, Route Tables, etc).

This example uses US West (Oregon).

Step 3. Create a Security Group for the VPC.

Security Groups are like ACLs to permit or deny traffic.

Step 4. Create an IAM role with a Policy and associate it to the VPC.

The CSR1000v is used as a proxy to call AWS API commands to modify the route table. By default, AMI's are not allowed access to APIs. This procedure creates an IAM role and this role is used during the launch of a CSR instance. IAM provides the access credentials for CSRs to use and modify AWS APIs.

Step 5. Launch the CSR1000v's with the AMI role you Created and Associate the Public/Private Subnets.

Each CSR1000v router has 2 interfaces (1 public, 1 private) and is in its own Availability Zone. You can think of each CSR as being in separate datacenters.

If you are unable to ping the elastic ip address of this new AMI, briefly go to Step 8 and ensure that the public subnet is associated with the public route table.

Step 7. Repeat Step 5 and Create a VM(Linux/Windows) from the AMI Marketplace.

For this example, use Ubuntu Server 14.04 LTS on the marketplace.

If you are unable to ping the elastic ip address of this new AMI, briefly go to Step 8 and ensure that the public subnet is associated with the public route table.

Configure the Generic Routing Encapsulation (GRE) tunnel through the Elastic IPs of the CSR 1000v's (recommended to avoid DHCP lease renewal issues, which detect false failures.) The Biderection Forwarding Detection (BFD) values can be configured to be more aggressive than those shown in this example, if faster convergence is required. However, this can lead to BFD peer down events during intermittent connectivity. The values in this example detects peer failure within 1.5 seconds. There is a variable delay of about a few seconds between the time when the AWS API command is executed and when the VPC routing table changes go into effect.

GRE and BFD - Used to observe conditions for HA failover

GRE and BFD - Used to observe conditions for HA failover

Monitor BFD peer down events by configuring each CSR 1000v using the cloud provider aws command specified below. Use this command to define the routing changes to (VPC) Route-table-id, Network-interface-id and CIDR after an AWS HA error such as BFD peer down, is detected. 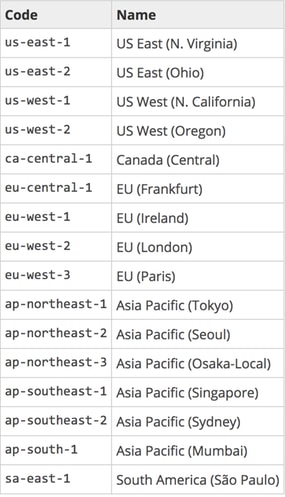 Resolution: Http is used to send the API call from the CSR to AWS. Ensure DNS can resolve the DNS name listed in your instance. Ensure http traffic is not blocked.

Resolution: Region name and ENI are incorrectly configured in different networks. Region and ENI should be in the same zone as the router.

Problem: You are not authorized to perform this operation. Encoded authorization failure message.