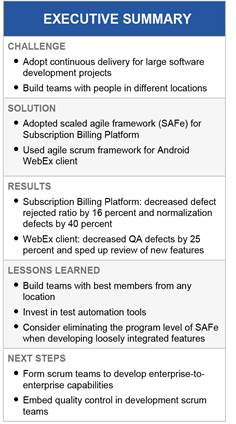 Cisco IT constantly looks for new ways to go faster, simplify, and become more agile. Our guiding principle is to digitize every process and thing that we can. Digital IT leads to a better customer experience, higher productivity, and business growth.

Part of our digital IT strategy is agile development. The goal is to replace periodic major releases with continuous delivery of new features.

Like most IT organizations, Cisco had adopted agile software development techniques to some degree. We started with small teams working on straightforward projects. Teams that were large, distributed, or worked on complex projects continued to use the waterfall development method.

The Cisco Cloud and Software IT (CSIT) organization wanted to adopt agile development for all projects, even the largest and most complex. “Our goals are to speed up releases, increase productivity, and improve quality,” says Ashish Pandey, technical lead for the CSIT team.

The SBP is complex software as a service (SaaS), including internal portals, a services layer, and integration with Oracle Business and Revenue Management (BRM). Originally we formed different teams for design, build, test, and deploy. The build team didn’t start until the design team completed its work, the test team didn’t start until the build team had completed its work, and so on.

Over time we adopted agile practices for small functional enhancements, but larger enhancements continued to rely on the waterfall model. Maintaining separate tracks slowed us down, leading to:

SBP development teams overcame these challenges by moving from waterfall development to the scaled agile framework, or SAFe (Figure 1). 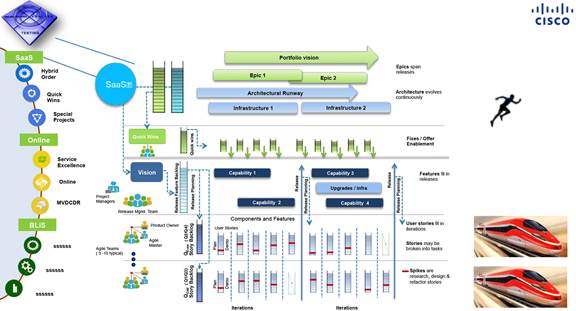 The three agile release trains worked together to build and test small features within one SaaS component. They regularly delivered tested features to the system integration and testing team (Figure 2). 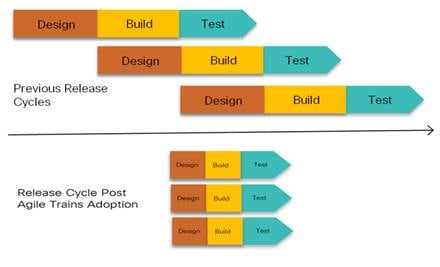 During the release cycle, the delivery team met 15 minutes each day, entering action items on a Kanban board. A Kanban board is a work and workflow visualization tool that enables you to optimize the flow of your work. People working from home offices that day viewed the shared board on WebEx.

We delivered the new release of SBP on time, with 100 percent of planned capabilities (Figure 3). Compared to releases that relied on the waterfall method, the defect rejected ratio (DRR) dropped by 16 percent. Critical and major defects decreased by 40 percent.

We attribute the quality improvement to:

●   Enabling teams to manage themselves

●   Improving collaboration among developer teams in the US, China, and India 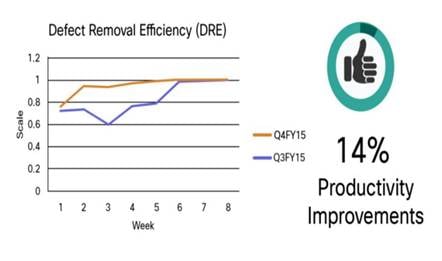 Beginning in January 2014, the WebEx Meetings app came pre-installed on Android tablets. Now people who purchase a tablet receive six months free access to WebEx Meeting Center. To prepare the app on time, CSIT developers had to work quickly. Requirements changed frequently, and developers had to expedite changes requested by the business unit.

During the planning phase, Cisco IT and other tracks worked together to gather requirements. They evaluated the readiness of environments, partners, and engineering and marketing teams. The development team used extreme programming practices, including test-driven development (TDD). With TDD, developers first write an automated test case for a new function. Next they produce the least amount of code needed to pass the test. Then they refine the code to make it simpler and easier to maintain.

We reduced quality assurance (QA) defects by 25 percent by using agile scrum development. In addition, the business group reviewed new features earlier in the cycle than they did with previous releases because developers checked code into a repository several times a day—the basis for continuous integration.

With each sprint we became more efficient, as shown in the burn-down charts in Figure 5. The charts plot outstanding work (vertical axis) against time (horizontal axis).

Figure 5.      Each Sprint Was More Efficient than the Last 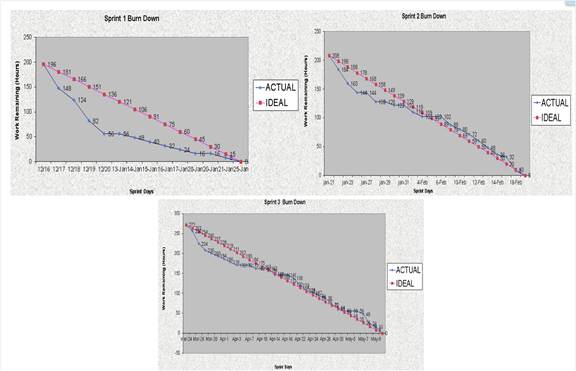 ●   Carefully choose team members. People in CSIT initially were skeptical that agile release trains could work because the ideal team requires skills not available in one location. We built the teams with members in different countries. Most team members are dedicated to their team full time, while a few split their time between multiple teams.

●   If possible, assemble teams with members in the same country. We found that developers in different global locations tended to operate as separate teams. The reasons are time zone differences, reporting structure, and cultural differences.

●   Realize that incremental testing requires the right kinds of tools. We could not have conducted regression testing every two weeks without test automation tools. We still conduct some manual testing.

●   It’s possible to eliminate or scale back certain elements of SAFe when working on unintegrated or loosely integrated products, features, or components. Consider eliminating the program level.

Our next steps include:

●   To read additional Cisco IT case studies on a variety of business solutions, visit Cisco on Cisco: Inside Cisco IT.

Some jurisdictions do not allow disclaimer of express or implied warranties; therefore, this disclaimer may not apply to you.