Release 8.0 expands Cisco ONS 15454 MSTP transport capacity in C band to 40 channels (100-GHz spacing) and to 80 channels (50-GHz spacing). In parallel with the existing 32-channel Reconfigurable Optical Add/Drop Multiplexing (ROADM) solutions, a new set of units is introduced in this release to enhance reconfigurability options for the MSTP platform, allowing multidegree reconfigurability as well. By making use of the Release 8.0 MSTP features and configuration flexibility, a Cisco DWDM network can scale to 112 channels of composite DWDM traffic, using both the C band and the L band spectrum.
The new 40-channel Wavelength Cross-Connect (40-WXC) card and the software functionalities extended from previous releases provide multidegree switching capabilities at the individual wavelength level. Mesh and multiring network topologies can now be deployed using Cisco ONS 15454 MSTP platform with complete flexibility of service routing at all nodes in the network. While Wavelength Selective Switch (WSS) units provide degree-2 type reconfigurability (drop wavelength in a node vs. let it pass through the node), an ROADM node based on 40-WXC units can support up to degree-8 reconfigurability. This means that for each wavelength it is possible to decide if it has to be locally dropped or routed to any of the other 7 pass-through directions of the node. Such a capability not only enhances the flexibility of the DWDM transport network but also dramatically reduces the need for costly transponders to perform optical-to-electrical-to-optical conversion (typically 2 transponders/crossponders per add/drop channel or wavelength). This capability allows carriers to more cost-effectively (from both a CapEx and OpEx perspective) build secure and efficient transport networks that can scale with their growing bandwidth and interconnect needs. The Cisco approach to DWDM gives carriers the freedom to reevaluate and alter their wavelength forecasts as service demands grow and business concentrations emerge-without suffering the heavy price typically associated with redesigning and mapping DWDM networks.
As even in complex mesh network topologies it is likely that degree-2 reconfigurability would be enough for most of the node, the 40-channel ROADM portfolio includes also two different versions of the 40-WSS units, one operating on the odd channels of the C band spectrum (40-WSS-C) and the other one operating on the even channels of the C band spectrum (40-WSS-CE). The units can be used in conjunction with existing 32-channel ROADM solutions and with 40-WXC units to provide the greatest degree of flexibility for Cisco ONS 15454 MSTP deployments.
The Cisco ONS 15454 ROADM cards are plug-in modules that use the proven Cisco ONS 15454 carrier-class features to deliver the flexibility to access network bandwidth from a single DWDM channel all the way to 112 channels, to support the requirements of service provider and enterprise networks. (See Table 1)

• Fast switching time: 40-WSS-C and 40-WSS-CE units can be used to provide shared optical protection directly in the optical domain with a protection time comparable with what SONET/SDH is able to guarantee.

The optical cards incorporate faceplate-mounted LEDs to provide a quick visual check of the operational status at the card. Printed on each of the faceplates is an icon, an orange circle, which is mapped to shelf-slot icons indicating the shelf slot where the card can be physically installed. The cards are supported by the integrated Cisco ONS 15454 Cisco Transport Controller craft manager, which provides the user access for operations, administration, maintenance, and provisioning (OAM&P) for the system. Using the embedded unit's capabilities, Cisco Transport Controller features also the possibility to provide a per-channel graphical representation of the optical power levels associated with each individual path in the ROADM nodes (Figure 2). 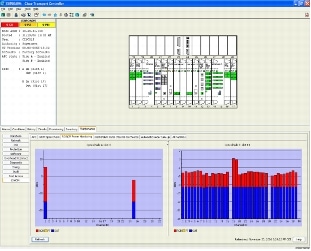 Complete flexibility provided by the ROADM unit highly simplifies the design of optical networks in terms of unit placement. Flexibility provided by units per se, in any case, is not enough to guarantee the possibility to define any possible optical path at the network level. The Cisco Transport Planner optical design tool features the possibility to design DWDM networks based on ROADM functionalities and to verify all the possible optical paths and the DWDM interface types (fully flexible network design) defined by the user. Fully flexible network design resulting from the joint selection of both optical paths and DWDM interface types is highly customizable by the user, who has the possibility to compare different solutions and to create what-if scenarios in a simple and effective way.
Figures 3 through 5 show a sample signal-flow diagram for a Cisco ONS 15454 MSTP ROADM node, outlining the use for each unit type. 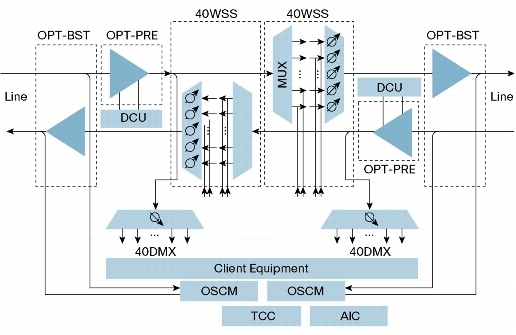 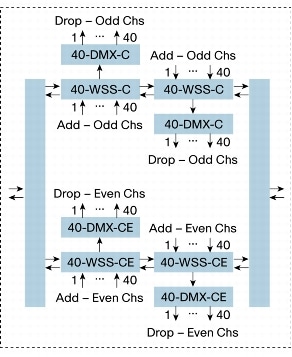 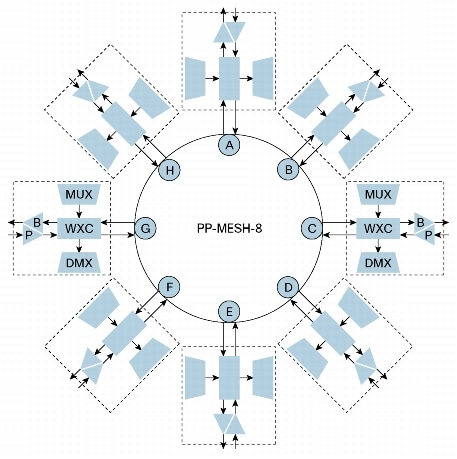 1All compliance testing and documentation may not be completed at release of the product. Check with your sales representative for countries outside of Canada, the United States, and the European Union.