Industry trends indicate that DWDM is the technology being used to transport the huge amount of bandwidth that broadband services are consuming. Thus, DWDM needs to evolve from simply offering management capabilities for Layer 1 (where optical wavelengths are dispatched across the network) to offering Layer 1 and Layer 2 capabilities that provide wavelength connection in addition to VLAN management; quality of service (QoS); and multicast, broadcast, and unicast services – all with reliability comparable to or better than that of older time-division multiplexing (TDM) technologies.

You can configure boards to operate in three operating modes:

●   Layer 2 switch: In this operating mode, the Cisco ONS 15454 Gigabit Ethernet XPonder card behaves like a Layer 2 switch. The tagged VLAN mechanism makes it possible to build an Ethernet ring over a DWDM wavelength. All Layer 2 packet forwarding as well as multicast replication is performed at wire speed. The two trunk ports equipped with DWDM XFPs are used as Layer 1 substratum Network-to-Network Interface (NNI) ports for an Ethernet distribution ring built by various clients shared on the XPonder cards belonging to that wavelength.

Additional QoS functions on the enhanced XPonder include:

●   Per-CVLAN-to-SVLAN ingress class of service (CoS)

●   One Strict Priority and seven Weighted Round Robin (WRR) queues (weight can go from 0 to 15), with tail drop to control congestion; when zero is configured, the queue is managed as a Strict Priority queue

●   Bandwidth limitation per queue (you can also configure bandwidth per port)

●   For each port, configuration of up to eight queues

The Cisco ONS 15454 XPonder supports both push and pull models for video broadcast or multicast applications. The SVLAN-based drop-and-continue approach is used for the push model, where all multicast and video broadcast traffic is dropped at each site. With Internet Group Management Protocol Version 2 (IGMPv2)1 capability, the XPonder provides a pull model where a multicast stream or a video channel is pulled on to the network with a join from the end customer. Multicast VLAN registration (MVR)1 further enhances network flexibility for video applications where a multicast VLAN is reserved for the network independent of the VLAN on which the service is delivered on each port. The translation from multicast VLAN to customer VLAN happens at the client port.

In this operating mode, the Cisco ONS 15454 Gigabit Ethernet XPonder card does not provide any Layer 2 functions. This mode provides a cost-optimized Ethernet transport solution. Equipping the 10 Gigabit Ethernet port with DWDM XFP allows it to support a point-to-point DWDM configuration than can support oversubscription at the 10 Gigabit Ethernet layer. All the ports are configured with a default CIR of 500 Mb, but you can reconfigure this value (at individual port granularity). Flow control is also available as a selectable option.

An important feature of the Cisco ONS 15454 Gigabit Ethernet XPonder card is the capability to configure FEC in three modes: NO FEC, FEC, and E-FEC. The output bit rate varies:

You can provision error-coding performance:

●   this FEC scheme contains three parameterizations of the same scheme of two BCH codes, with the constructed code decoded iteratively to achieve the expected performance

The Pseudo Wires mechanism is used to map E1, E3, T1, T3, DS-1, and DS-3 services directly over a Fast Ethernet frame on the Enhanced Xponder.

A GFP mechanism is used to map Fast Ethernet-over-PDH signals.

For multiple transponder configurations, the XPonder card supports the following:

The XPonder also offers redundancy with no single point of failure in a ring configuration:

●   For ring protection, the XPonder provides a revolutionary new level of Ethernet protection through the G.709 Rapid Resilient Ring Ethernet Protection (GR3) mechanism, integrating G.709 messaging with an Ethernet VLAN mechanism when configured as Layer 2 switches to provide reliability comparable to older TDM systems. A recovery time of 50 ms (including detection time) can be achieved. The protection mechanism uses a mix of Layer 1 and Layer 2 functions, with fault detection and failure propagation performed through the G.709 bytes (failure propagation is performed at the hardware level) while traffic is flooded, for each protected VLAN on all 10 Gigabit Ethernet WDM rings. One node is identified (through user configuration) as the primary node (or port). This node is responsible for opening and closing the Layer 2 VLAN loop if failure occurs.

●   The XPonder provides client and card redundancy with SONET/SDH-like 1 + 1 card protection in either the same or a different shelf (within the same multi-shelf management domain)1 with following protection models:

◦     The active port is enabled while the standby port stays disabled.

◦     Both active and standby ports are enabled; only the active port forwards, whereas the standby port drops all ingress-egress traffic.

●   A GR3 protection mechanism is required.

●   The Layer 2 XPonder also supports “Y-cable bidirectional-like” switching where two cards in 1 + 1 protection are connected through a Y-cable to a single client.[2]

●   Link aggregation (LAG) (802.3ad) protection:[3] You can use the Link Aggregation Control Protocol (LACP) to provide local point-to-point resiliency between the co-located router or switch and the XPonder. LAG cannot provide the 50-msec switching that 1 + 1 client protection can, but it allows load balancing and increased bandwidth. In addition, XPE allows a LAN extension scenario, where it is possible to achieve higher bandwidth usage at either 10 Gigabit Ethernet or at 10/100/1000 Mbps.

The generic communications channel (GCC) of the digital wrapper allows a separate communications channel on a per-wavelength basis. This GCC allows the Cisco ONS 15454 MSTP to extend its advanced network autodiscovery capabilities to DWDM-based services. The integrated Cisco ONS 15454 MSTP Transport Controller Craft Manager and the Cisco Transport Manager EMS give you OAM&P access for the system.

●   Orange: Selected VLAN is configured only on one end of the link

●   Gray: Selected VLAN is not configured on either end of the link

You can provision all SVLAN-associated parameters using predefined profiles.

IGMP Snooping is a nonintrusive Layer 3 monitor for Layer 3 multicast traffic received on the client ports of the XPonder. The Layer 3 packets with Class D IPv4 addresses are snooped per SVLAN if MVR and IGMP are provisioned.

The XPonder in Release 9.2 supports the following E-OAM family of protocols as defined in IEEE and ITU-T. The XPonder provides Provider Bridge functions (per port or per VLAN).

The performance-monitoring capabilities of the Cisco ONS 15454 Gigabit Ethernet XPonder card support Ethernet signal transport. Standard performance parameters for transmit and receive signals are based on RFCs 3635, 2358, 2233, and 1757. Each digital-wrapper channel is monitored according to ITU-T digital-wrapper requirements (G.709). Optical parameters on the SFP and XFP interfaces are supported, including laser bias, transmitter optical power, and receiver optical power. Performance-monitoring data is calculated and accumulated in 15-minute and 24-hour intervals.

The Cisco ONS 15454 Gigabit Ethernet XPonder cards incorporate faceplate-mounted LEDs to allow a quick visual check of the operating status of the card. An orange circle printed on the faceplate indicates the shelf slots in which the card can be installed.

The XPonder supports link integrity using Y.1731 Ethernet OAM-AIS message per SVLAN. You can enable or disable squelching on a per-port basis.

The XPonder card adds several new applications to the already-flexible Cisco ONS 15454 MSTP. Cards have been developed to meet the needs of many different network applications, from DWDM point-to-point to EVPN services in Metro Ethernet environments. When configured as DWDM Ethernet muxponders, XPonder cards perfectly meet the incremental demand for Ethernet bandwidth at ever-lower prices. The availability of pluggable optics for DWDM also dramatically increases the density of 10 Gigabit Ethernet, reducing the per-port cost.

With Ethernet-enabled DWDM, the solution is scalable and provides a “pay-as-you-grow” model. You can start with a 10 Gigabit Ethernet ring over dark fiber or add a wavelength to an existing DWDM ring. As traffic demand grows, you can add new 10 Gigabit Ethernet wavelengths and scale up to 800 Gb on a pair of fiber strands.

The ring topology allows the XPonder to add and drop Ethernet traffic at a sub-lambda level. Ethernet-enabled DWDM with its ring topology enables an intelligent DWDM network, eliminating the need for unintelligent transponding on a transport network. 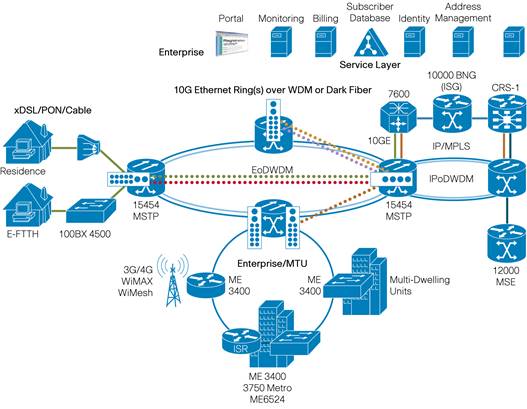 ●   Metro Ethernet application: The MEF9 and MEF14 certification environment, with EVPL and ELAN, provides full support for Ethernet carrier applications and support for business services as well as for real video, voice, and data services.

●   Common line cards and chassis: Optical line cards are not dependent on restoration type, so sparing costs and technician confusion are reduced. Additionally, as networks and customer interface demands evolve, you can easily redeploy optical circuit packs as necessary.

●   Single software load: One software load supports all restoration types, eliminating unnecessary guesswork when ordering. All protection configurations are covered by a single right-to-use software license. After you purchase the software, all features and functions are available to you.

●   Common chassis: A common chassis supporting all optical interface speeds allows the technician to spend time deploying bandwidth and services instead of learning about multiple equipment platforms. Many equipment vendors offer optical-line-speed–specific platforms (for example, OC-3/STM-1 or OC-12/STM-4) and categorize platforms by restoration mechanisms (for example, UPSR/SNCP, 2F-BLSR/MS-SPR, and 4F-BLSR/MS-SPR). This approach causes ordering confusion and brings into question whether the inventoried equipment will accommodate the functions required to support the desired application. The line-rate and restoration flexibility of the Cisco ONS 15454 platform makes ordering and deployment quick and easy.

Table 1 lists regulatory compliance information. All compliance documentation may not be completed at the time of product release. Please check with your Cisco sales representative for countries outside of Canada, the United States, and the European Union.