The Cisco® ONS 15454 Multiservice Transport Platform (MSTP) High-Power Counter-Propagating and Co‑Propagating Raman Amplifiers (Figure 1) operate in the C-band region of the optical spectrum to extend the reach and capacity of regional, long-haul, and ultra-long-haul optical networks beyond what is achievable through standard Raman amplifiers or Erbium Doped Fiber Amplifiers (EDFAs). These cards are part of the Cisco ONS 15454 MSTP intelligent dense wavelength division multiplexing (DWDM) platform, engineered to reduce DWDM complexity and speed the deployment of next-generation networking solutions.

Supporting 96 channels in the C band, the Cisco ONS 15454 High-Power Counter- and Co-Propagating Raman Amplifiers (15454-M-RAMAN-CTP and 15454-M-RAMAN-COP, respectively) are plug-in modules that provide the reach and optical performance required to meet the most demanding distance requirements of service provider and enterprise DWDM networks.

As explained in Table 1, two different deployment options are available.  One uses the high power counter-propagating unit alone, and the second uses both units, depending on the span length that needs to be traversed.

The high power counter- and co-propagating Raman amplifiers take advantage of the latest in amplifier technology, variable optical attenuators, photo diodes, and extensive software to facilitate a high degree of automation for simplified operations. The Raman pumps embedded in the two units use the latest laser technology, delivering up to 1000 mW of optical power by combining just four pump lasers, thus obtaining a very high efficiency and low power consumption while making possible an extended amplification process for long-haul transmission systems. Figures 2 and 3 show the functional block diagrams of both units. 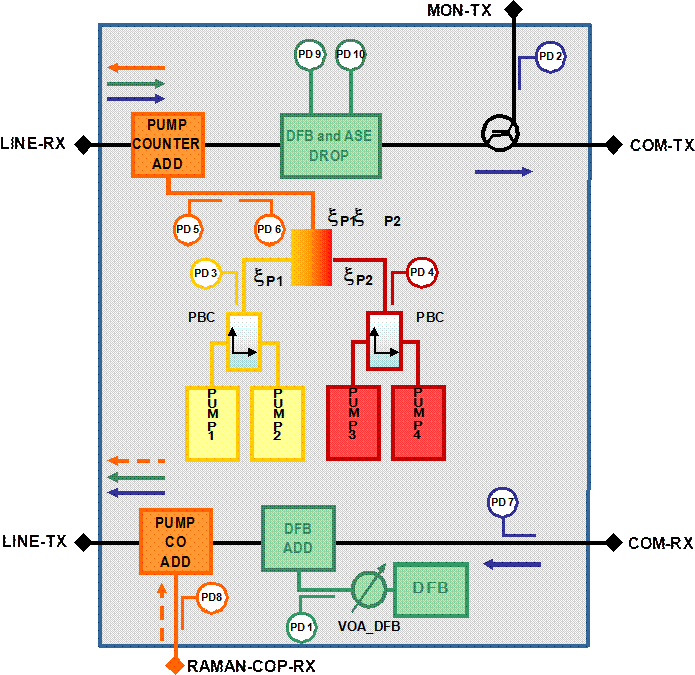 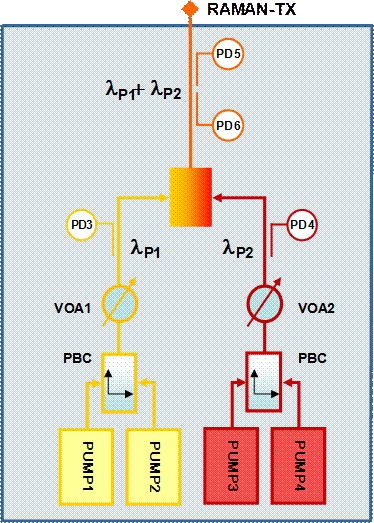 The counter-propagating Raman amplifier includes an embedded distributed-feedback (DFB) laser at 1568.77 nm to be used for optical safety (link continuity). When loss of signal (LOS) is detected (a related fail-low alarm threshold for a period longer than a preset time span), the DFB laser and Raman pumps automatically shut down for optical safety and automatically restart at detection of valid restart conditions. The shutdown and restart functions can be managed through manual commands from hardware or software, providing an enhanced approach to optical safety. The pumps added from the co-propagating Raman unit to the counter-propagating Raman unit and the associated DFB act in a similar fashion. The counter-propagating unit provides parallel, low failure-in-time (FIT) optical safety functions, which allow the classification of the unit as Class 1M as defined by IEC/EN 60825-1. The embedded detection devices and control mechanisms allow the operator to shut down the amplifier (lowering its transmit optical power below the level defined in the recommendation mentioned previously) if any of the following situations occur:

●    Raman pump back-reflection, which may be caused by bad connectors or similar problems with the span fiber

The counter-propagating unit allows full monitoring of pump power, signal power, and DFB laser power; whereas only the pump power can be monitored in the co-propagating unit. Both units feature a Raman pump back-reflection detector.

Due to their potential length, DWDM network spans using Raman amplification may exhibit loss exceeding the reach of the optical supervisory channel (OSC) interface.  In these cases, the data-communications-network (DCN) extension capabilities of the Cisco ONS 15454 MSTP can be used to help ensure the correct operation and support of the embedded intelligent optical applications, such as Cisco Wavelength Path Provisioning (WPP), Automatic Power Control (APC), Network Topology Autodiscovery, and Network-Level Alarm Correlation (NLAC). DCN extension can be implemented over an out-of-band network, or the General Communications Channel (GCC) provided by the G.709 overhead present on a provisioned wavelength.

Selection and deployment of the Cisco ONS 15454 counter- and co-propagating Raman units depend on the requirements of the network. The Cisco Transport Planner optical design tool is available to assist in the engineering, design modeling, bill-of-materials (BoM) generation, and deployment of the DWDM network.

Both units incorporate faceplate-mounted LEDs to provide a quick visual check of the operational status of the card. Printed on each of the faceplates is an icon, an orange circle, which is mapped to shelf-slot icons indicating the shelf slot where the card can be physically installed.

Using the counter- and co-propagating amplifiers, the Cisco ONS 15454 MSTP can support numerous applications, including the following.

●    Support for very long single spans: The primary application of these high-power Raman amplifiers is to provide distributed amplification in very long single spans. The counter- and co-propagating units can provide high capacity over very long fiber spans where intermediate amplification or regeneration cannot be supported (such as repeaterless submarine links or festoon applications). Up to 155-mile (250-km) single-span systems are possible using 10-Gbps and 40-Gbps wavelengths. Using 100-Gbps wavelengths, the single-span reach of the system can be extended to approximately 130 miles (210 km). The maximum single-span reach attainable by employing Raman amplification with up to 8 channels, using both units, is 61dB.

●    Ultra-long-haul unregenerated transmission: The high power counter-propagating units can be used in conjunction with EDFA-based optical amplification to extend the unregenerated reach of DWDM systems by preserving optical signal-to-noise ratio (OSNR) as multiple spans are traversed, allowing for systems up to 2000 miles (3200 km) in length.

●    Improved transmission reach and capacity for networks with long spans: Many DWDM networks are deployed in locations where excessively long spans exist because of the geography of the region.  EDFA-based systems suffer a high OSNR degradation when the wavelengths cross these long spans because of their high attenuation and tilt. Selective use of Raman amplification can lower the insertion loss of these spans and improve the overall unregenerated distance and system capacity.

●    Expansion of system capacity to 96 channels: These Raman amplifiers, in addition to the Enhanced C-Band 96-Channel EDFA Amplifiers, support up to 96 channels in the C band, allowing 50-GHz systems to reach 9.6 Tbps of capacity with 100-Gbps wavelengths.

To equalize the Raman gain ripple, the high-power Raman amplifiers must be equipped in nodes with equalization ability: either a dynamic gain-equalizer (DGE) node or a reconfigurable optical add/drop multiplexing (ROADM) node. Multiple options are possible and are detailed in Figures 4 through 6. 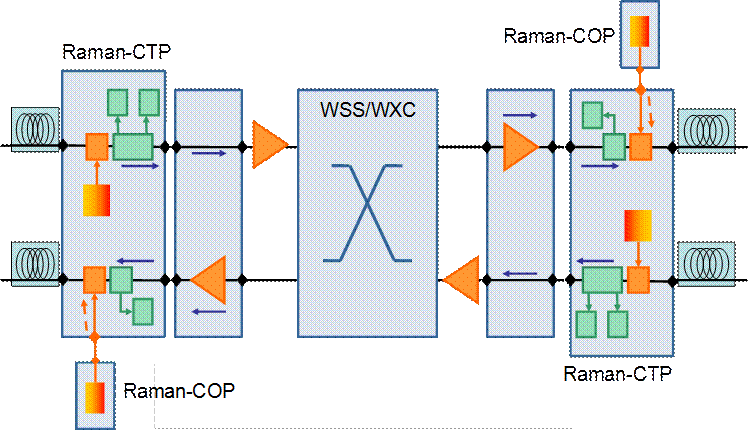 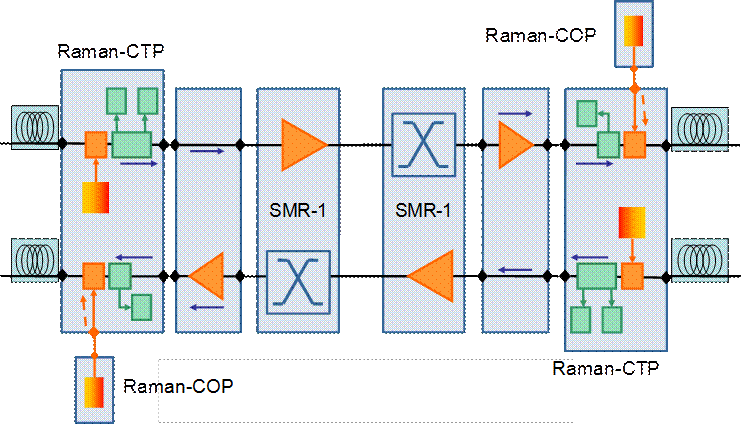 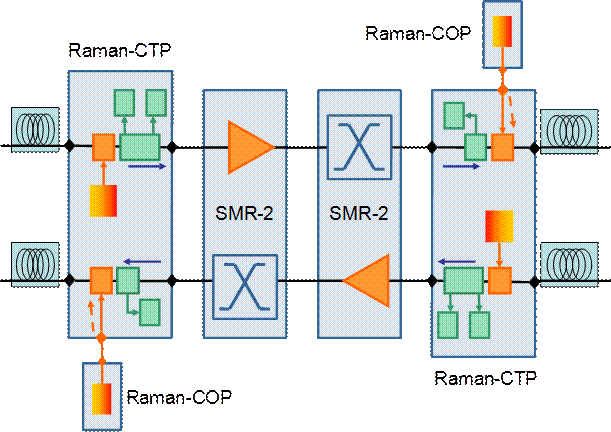 Tables 2 through 6 provide the specifications for the Cisco ONS 15454 High-Power Counter- and Co-Propagating Raman Amplifiers.

Warranty information is available on Cisco.com at the Product Warranties page.