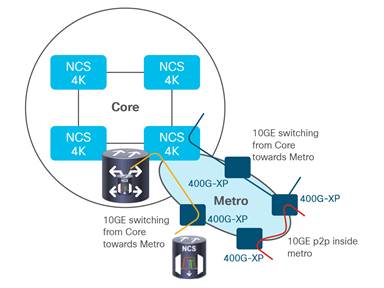 The following new software features are available in Release 10.9 on the Cisco NCS 2000 Series:

The Xconnect mode also supports the clients to be configured with protection using the SNC/I wherein each
10-GE/ OC192 / STM64, OTU2/2e, 100-GE, OTU4 client can be protected internally between the two trunks on the 400G-XP card enabled with 100G / 200G DWDM line interfaces.

In Release 10.9, the NCS 2000 400-G Xponder supports the 8-QAM modulation format in the NCS2000-S software package that is equipped with FLOW control plane. It provides two 150G DWDM wavelengths that are co-routed in a media channel group. 8-QAM mode will be multiplexing 300G of client bandwidth to be transmitted over two CFP2 ports, each transponding 150G on the same path between the source and destination.

In Release 10.9 the 400G DWDM Xponder module supports enabling PRBS on the client interfaces to test the end-to-service link between two locations. This functionality is supported in both MXP mode and Xponder mode. The supported PRBS modes are PRBS 11 and 31.

In Release 10.9 the 400G DWDM Xponder module supports enabling layer-0 encryption with AES 256 payload encryption for the OTU4 transmitted over 100-G / 200-G DWDM wavelengths. Encryption is done over the OTU4 between the two end points with a total point-to-point encrypted DWDM capacity of 400 Gbps. L-NCS2K-100GCRPK9= is the license that needs to be enabled per OTU4 on the line module. A total of four licenses are allowed per line card when operated in 200G QAM-16 modulation format for 400G of client capacity.

In Release 10.9 the NCS 2000 400-G DWDM Xponder supports the enablement of GCC0 on the DWDM trunk modules. Provisioning over GCC0 in GNE-ENE mode is available along with a software download and management over the GCC0 channel.

In Release 10.9 the NCS 2000 Flex and SSON software package supports remotization of the transponder chassis in a node by using external PPC between the ROADM chassis and the TXP chassis. Modules that support this functionality are 100G / 200G DWDM line modules, MR-MXP module, and 10x10G module when paired with respective 100G DWDM line cards. The transponder node and the ROADM nodes must be on the same IP routing domain to have a control plane running on the entire network.

Refer to Table 1 and Table 2 for the product identifiers and respective descriptions for the software packages and the hardware modules introduced in Release 10.9.

Services from Cisco and our partners help you get the most value from your investments in the Cisco converged IP+ Optical solution, quickly and cost-effectively. We can help you design, implement, and validate your solution to speed migration and cutover. Coordinate every step through to interworking. Strengthen your team. And make the most of tomorrow’s opportunities. Learn more at https://www.cisco.com/go/spservices.

For more information regarding the Cisco NCS 2000, visit: