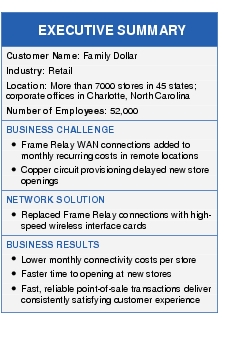 Founded in Charlotte, North Carolina, in 1959, Family Dollar is one of the largest small-format convenience and value retailers in America, with more than 7000 stores in 45 states. Averaging 7000 square feet, Family Dollar stores carry name brand and quality private brand groceries, household cleaners, housewares, and other general merchandise. The company has opened an average of 200 new stores annually over the past five years, and plans to step up its growth by adding another 450-500 stores in the next year alone.
In its fiscal year 2011, Family Dollar reported annual sales of US$8.5 billion. With the average customer basket size about $10, Family Dollar's success depends on a high volume of transactions per store, which in turn depends on offering a dependably satisfying customer experience and the smooth, efficient processing of transactions at the point of sale.
Family Dollar stores operated as cash-and-carry businesses until six years ago, when the company converted its stores to offer electronic tender via credit, debit, and gift cards in addition to cash sales. To process their sales transactions, stores are equipped with Windows Embedded (an XP-based) point of sale (POS) devices. In addition, each store features a customer-facing thin-client kiosk, which store managers and employees use for scheduling, time-keeping, payroll allocation, online learning, and other applications hosted by the company's centralized data center.
To connect remote stores to the company's WAN, Family Dollar's IT managers originally chose to use Frame Relay circuits. "We needed broadband connectivity, but you just couldn't get ADSL (asymmetric DSL) in some parts of the U.S., especially in the rural areas where many of our stores are located," says Family Dollar network engineering manager John Schoonover. "You still can't."

"So we went with Frame Relay where we had to," he says. "It's distance-friendly. It's available everywhere. And it offers the guaranteed uptime we require."
The problem is, Frame Relay circuits are relatively costly. A second, bigger problem: Frame Relay circuits, being copper-based, can take up to 60 days to provision, even after Family Dollar signs a lease and applies for a phone number for a new store. So new stores might be built out and stocked quickly, and then sit idle for weeks for want of an adequate connection to the company's WAN. For a company in aggressive growth mode, that delay was unacceptable.

Meanwhile, however, cellular service towers were proliferating throughout the United States, even into the more remote rural areas. That trend presented the company with a new connectivity option: wireless broadband.
"The goal was an all-broadband network," says Schoonover, "and our requirements were clear: high availability and reliable uptime at an economical price."
"In our business, margins are very narrow, and we have to keep close tabs on our operational costs at every store," he says. "So we were ready to take the time to evaluate all our options both technically and financially."
Family Dollar had been using Cisco equipment for many years, starting with its central IT infrastructure and then deploying Cisco routers at store locations beginning seven years ago. The company's network managers were well on their way to standardizing the stores on Cisco ® 1841 Integrated Services Routers (ISRs) when they started considering wireless options.
About that time, as it happened, Cisco was beta-testing its new 3G wireless high-speed WAN interface cards (HWICs) for Cisco ISRs, including the 1800 series. "The timing worked out for us," says Schoonover, "and we qualified as a beta site for the HWICs."
The Cisco 3G HWICs, which support the latest 3G standards, including EvolveData-Optimized (EV-DO), are tightly integrated with the secure data, voice, and mobility services provided on the ISR. And, with data rates approaching T1 speeds, 3G networks provide a reliable alternative to wireline connectivity solutions including DSL and cable. 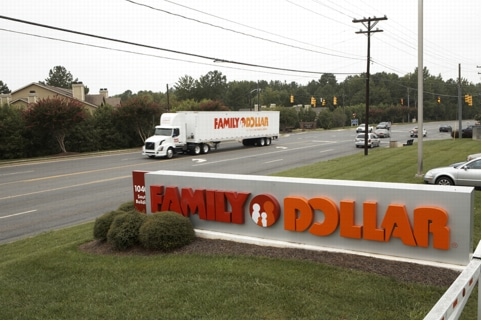 "In our testing, we found the cards were fully enterprise-worthy in addition to being economical," says Schoonover. "To bring a store online, all we had to do was plug in the card, add an external antenna, and choose a plan from one of the wireless service providers in each location."
Now, 18 months later, Family Dollar's WAN is 100 percent broadband. Every store's connectivity has been upgraded, including more than 1000 with Cisco EV-DO HWICs. In stores located beyond a reliable wireline infrastructure, the Cisco wireless solution provides the only broadband connectivity. At about 2500 other stores, it adds a valuable backup circuit: if for any reason the wireline network connection fails, the Cisco ISR routes mission-critical data to the HWIC for transmission across the wireless infrastructure. The router can even distinguish different types of traffic and allow only mission-critical traffic to flow over the backup interface.
The network managers like to keep POS data separate from other types. "The priority is always to keep sales transactions up and running efficiently," Schoonover says, "because that's key to providing a good customer experience."
Even while converting some 6500 stores in just a year and half, he and his team also developed a process for quickly provisioning new Family Dollar stores with broadband, using an HWIC-based "crash kit" that enables each new store to open its doors for business as soon as it is stocked and staffed.

In more than 1000 locations where Family Dollar used to lease Frame Relay circuits for as much as $400 a month, each store now connects to the WAN via a simple, and much less expensive, cell phone plan. "We can economize even more by pooling multiple stores in a single plan, which cell carriers are happy to do," says Schoonover. On the lookout for such cost reductions at additional stores, he and his colleagues monitor the quality of cellular service in Family Dollar locations still served by Frame Relay, and convert stores to HWIC-based wireless connections when the local service reaches a certain threshold of quality and reliability.
At the same time, Family Dollar is now provisioning 100 percent of its new stores with Cisco HWIC connectivity. By eliminating the need to "drag copper into the store," as Schoonover puts it, that saves the company a considerable amount while reducing its use of costly natural resources. It also enables Family Dollar to open new stores just as soon as they are ready. "We wanted to avoid a month or more of facility rent without any revenues while we wait for the phone company to bring us a circuit."
Perhaps a bit ironically, having more stores provisioned with wireless WAN connectivity also saves Family Dollar both time and money in service calls. "If a store's connection goes down, we don't have to send a technician to troubleshoot the copper on premises. Any connectivity problems are on the cell service provider's network, not ours," says Schoonover.
"Of course, the store is still down, which is not good," he says. "Fortunately, the cell providers' networks are built for redundancy, so outages are very rare and very brief."

To find out more about Cisco Integrated Services Routers, go to http://www.cisco.com/go/isrg2.