This document specifically covers the IRCM support between catalyst 9800 wireless controllers and interoperability with AireOS controllers. It covers the cases of:

Cisco catalyst 9800 wireless controller uses CAPWAP based tunnels for mobility. The mobility control channel will be always encrypted and the mobility data channel can be optionally encrypted. This is called Secure Mobility.

AireOS uses EoIP tunnels for mobility. Support for CAPWAP based encrypted mobility (Secure Mobility) was brought in in 8.5. However the support for IRCM with Catalyst 9800 wireless controller is present only in 8.8.111 and above and in the 8.5 IRCM supported release.

Deployments and Use Cases

Let’s consider few common scenarios where customer will use a mix of C9800 and AireOS controllers:

Let’s examine the first one: Roaming across AireOS and catalyst 9800 wireless controllers. 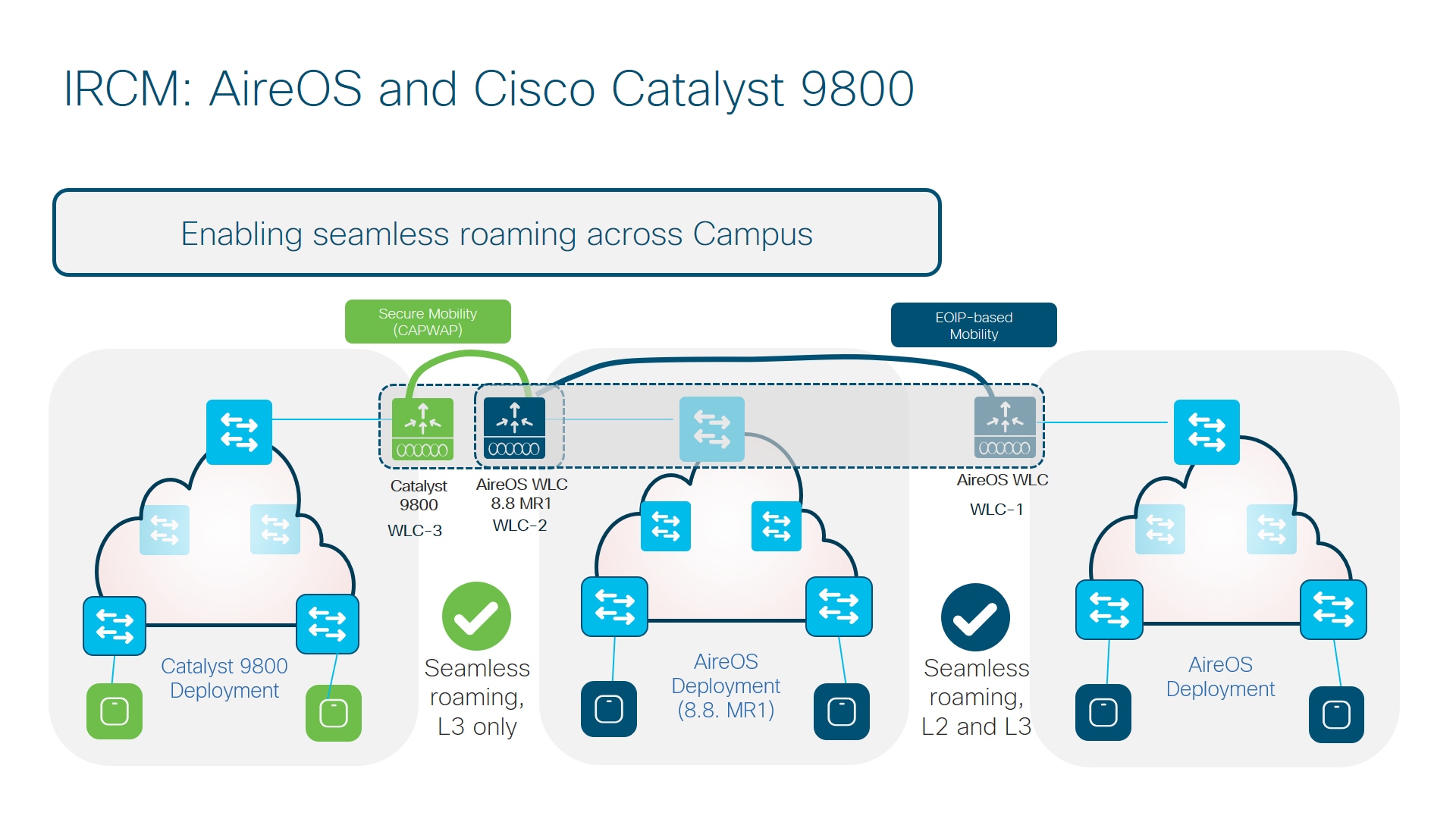 All the roaming between the C9800 and AireOS controllers is Layer 3 roaming. This means that no matter what VLAN the SSID is mapped to on each WLC, the client will always be anchored to the first WLC it joins. In other words, the point of attachment to the wired network doesn’t change with roaming, even if the VLAN on the wired side is the same on both WLCs.

In the migration design phase, when defining a common SSID for roaming, it’s recommended to use a different VLAN ID and subnet on the Catalyst 9800 and on the AireOS WLC.

As a result, clients will get a different IP whether they join first the Catalyst 9800 or AireOS WLC; seamless roaming is guaranteed either way because the client will always keep its IP address on the VLAN/ subnet it joined first.

Mapping the same SSID to a different VLAN ID on both wireless controllers might not be desired/possible in the following scenarios:

In the above cases, just map the same VLAN/subnet to the SSID on both the Catalyst 9800 and AireOS WLC; the only suggestion would be to run the following recommended releases:

Refer to the Cisco TAC URL https://www.cisco.com/c/en/us/support/docs/wireless/catalyst-9800-series-wireless-controllers/214749-tac-recommended-ios-xe-builds-for-wirele.html#anc21 for the latest recommended releases. 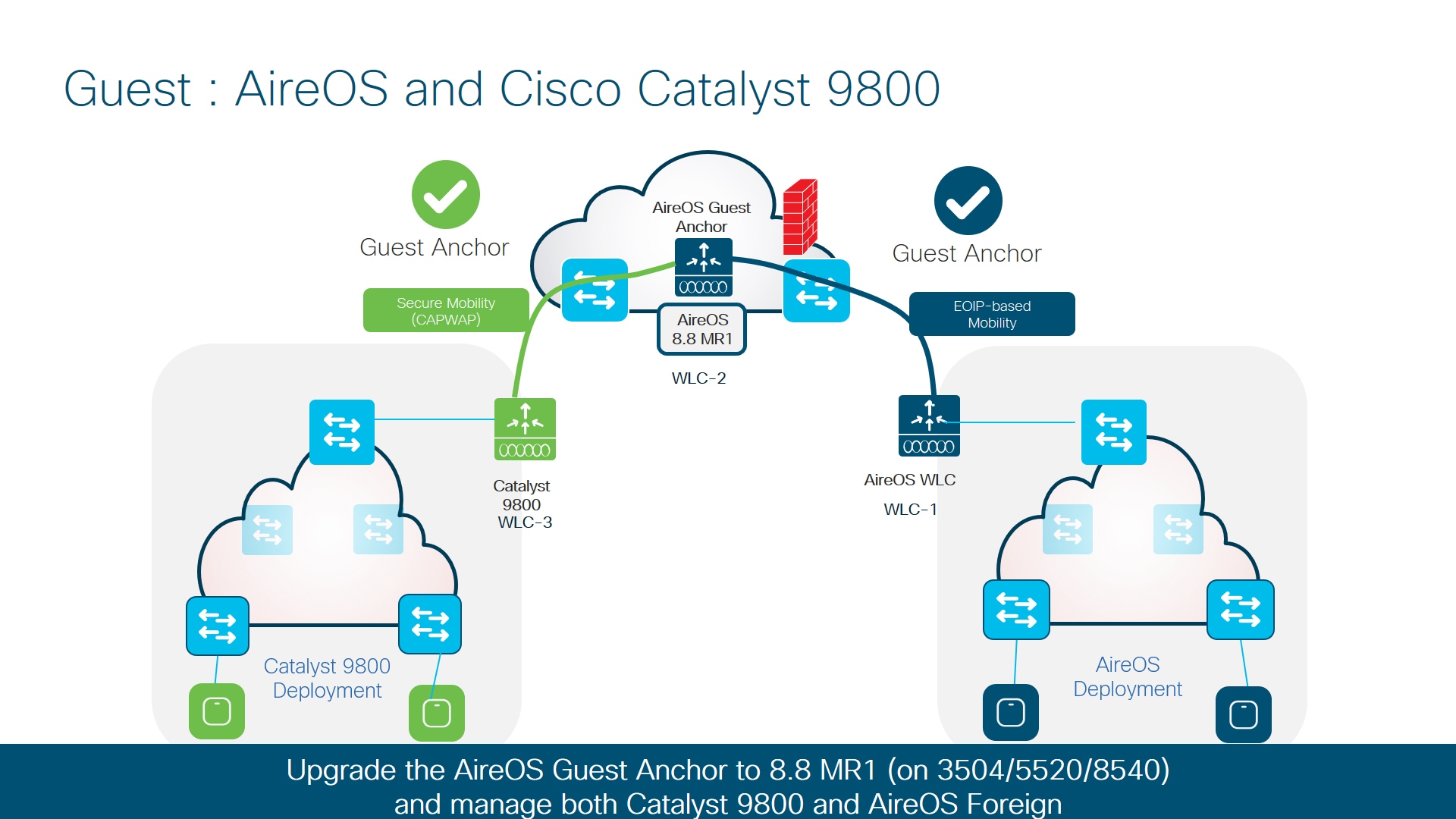 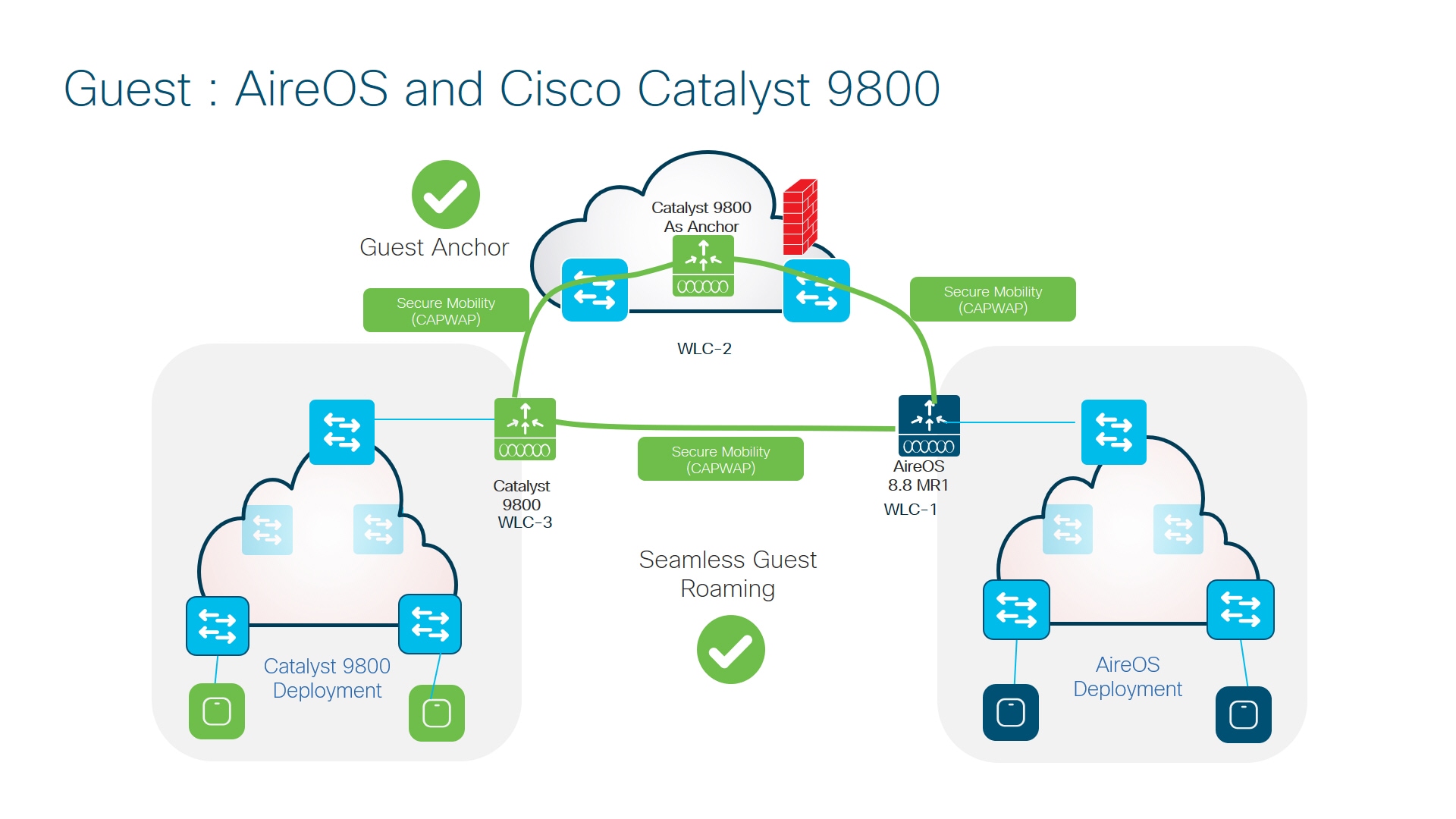 This is the configuration for setting up the Mobility peer with secure mobility.

Data Tunnel Encryption can be enabled or not to encrypt client data traffic. The same configuration need to be done on both sides for the tunnel to come up.

Following is the configuration for setting up the Mobility peer for EOIP mobility:

For older AireOS builds you will not even have an option to configure of secure mobility as only EOIP based mobility is supported.

Catalyst 9800 wireless controller has only secure Mobility by default, so you don’t have to configure it. Data encryption can be enabled optionally.

The hash configure above can be obtained by running the following command on catalyst 9800 wireless controller: