Connection SRSV supports several topologies based on the configuration of the router. You can deploy either original SRST or CUCME-as-SRST (also known as SRST Fallback Mode) at branch.

If you are running SRST at the branch site, you cannot also deploy the E-SRST feature.

Figure 14-2: Shows a topology where CUCME-as-SRST (also known as SRST Fallback Mode) is providing call control at the branch site.

Figure 14-3: Shows a topology where multiple CUCME-as-SRST and SRSV devices are paired for load balancing at the survivable branch site. In this scenario, the administrator uses Cisco Unified Communications Manager to divide the branch users between CUCME-SRST-1 and CUCME-SRST-2. The central Unity Connection server detects that and then sends the appropriate configuration to SRSV-1 and SRSV-2 at the branch site. In the event of WAN failure, each SRSV device will handle calls directed to it from the paired CUCME-as-SRST device. 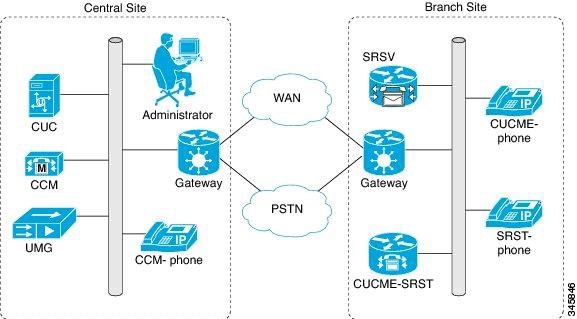 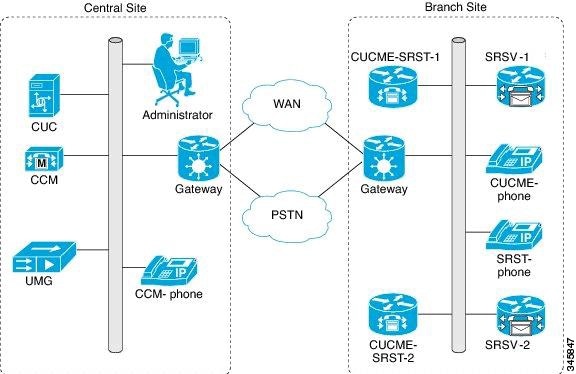 When you deploy SRSV and the central Unity Connection node in an HA pair, SRSV functions even if the primary server is down. There is no additional configuration needed to support this feature, it is automatically supported.

Each Connection SRSV branch will support 200 users per branch with a maximum of 10 branches per centralized Unity Connection server.

Bandwidth requirements for synchronization to central Connection server after outage

The synchronization process does not have any bandwidth requirements as it is not a real-time process.

Any supported Unity Connection hardware is suitable for Connection SRSV. Please see the current Supported Platforms List for the most up to date list of supported hardware.

For a complete comparison of Connection SRSV to UMG SRSV, please refer to the comparison guide: http://www.cisco.com/en/US/prod/collateral/voicesw/ps6789/ps5745/ps2237/product_data_sheet0900aecd806bfc37.html.