About the Cisco UCS S3260 System

The Cisco UCS S3260 system is designed to operate in a standalone environment and as part of the Cisco Unified Computing System with Cisco UCS Manager integration. It assumes almost the same characteristics of its predecessor, Cisco UCS C3160, but with the following additional features:

In addition, one of the server slots in the Cisco UCS S3260 system can be utilized by a storage expansion module for an additional four 3.5" drives. The server modules can also accommodate two solid state drives (SSD) for internal storage dedicated to that module. The chassis supports Serial Attached SCSI (SAS) expanders that can be configured to assign the 3.5" drives to individual server modules.

In a Cisco UCS S3260 system, both servers should have either dual RAID controllers or dual HBA controllers. Mixing the controller types is not supported.

Cisco UCS S3260 system supports Second RAID controller in the optional I/O expander module that attaches to the top of the server node. You cannot downgrade Cisco UCS Manager, BMC, CMC, and BIOS to any release earlier than 3.1(3) depending on the number of disk zoned to the controllers :

How to Use This Guide

All features and configuration tasks that are supported by Cisco UCS Manager Release 3.1 and later releases are described in the configuration guides that are listed in the following table. These guides must be used with this quick reference guide for Cisco UCS S3260 systems. 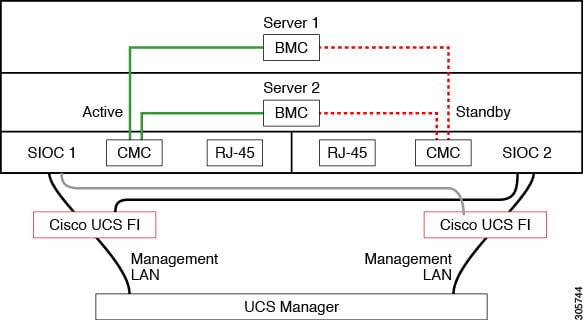 The system uses a chassis management controller (CMC) to manage the server nodes. Each system I/O controller (SIOC) module contains an onboard CMC. If you have two SIOCs, the two CMCs act in an active/standby organization. The CMC in the SIOC that you log into with the Cisco IMC interface becomes the active CMC and it allows you to manage the BMCs in both server nodes.

All user interfaces run only on the active CMC. Configuration changes are automatically synchronized between the active and the standby CMCs.

When you power-cycle the system, the CMC in SIOC 1 is the active CMC by default. The active CMC will fail over to the standby CMC when any of the following conditions occur:

The Cisco UCS S3260 chassis has a modular architecture consisting of the following modules:

One or two System I/O Controllers, each of which includes a 1300-series VIC. The Cisco UCS S3260 SIOC has an integrated Cisco UCS VIC 1300 Series chip onboard, so there is no removable adapter card.

Up to two SSDs per server node.

The Cisco UCS S3260 chassis can be connected in one of the following ways:

N2348UPQ and 2232 FEX: The SIOCs can be connected directly to the FEX ports through a single 10G connection using a QSA connector.

The following illustration shows the associations for a single-server system:

In this mode of deployment, each server slot contains an independent server blade. The redundant server nodes along with the various components such as SAS SSDs provide high availability.

The Cisco UCS S3260 system can operate in either standalone mode or can be managed by Cisco UCS Manager.

Beginning with release 3.1(3), Cisco UCS S3260 system supports Server SIOC Connectivity functionality. Using this functionality, you can configure the data path through both the primary and auxiliary SIOCs when the chassis has single server and dual SIOCs set up.

This functionality works only under the following conditions:

After Cisco UCS Manager is upgraded to release 3.1(3), chassis discovery is triggered and UCSM gets the operational state of Server SIOC Connectivity feature. User can now enable the feature using the single-server-dual-sioc option available for Compute Conn Policy under chassis profile.

In CLI, once Compute Conn Policy property is set to single-server-dual-sioc, run the apply pending-changes immediate command to start association.