The Virtual Router Redundancy Protocol (VRRP) is an election protocol that dynamically assigns responsibility for one or more virtual routers to the VRRP routers on a LAN, allowing several routers on a multi-access link to utilize the same virtual IP address. A VRRP router is configured to run the VRRP protocol in conjunction with one or more other routers attached to a LAN. In a VRRP configuration, one router is elected as the virtual router master, with the other routers acting as backups in case the virtual router master fails. This chapter includes the following topics:

The dynamic discovery protocols incur some configuration and processing overhead on the LAN client. This could be detrimental also, in the event of a router failure, the process of switching to another router can be slow.

An alternative to dynamic discovery protocols is to statically configure a default router on the client. This approach simplifies client configuration and processing, but creates a single point of failure. If the default gateway fails, the LAN client is limited to communicating only on the local IP network segment and is detached from the rest of the network.

Figure 44-1 shows a LAN topology in which VRRP is configured. In this example, Routers A, B, and C are VRRP routers (routers running VRRP) that comprise a virtual router. The IP address of the virtual router is the same as that configured for the Ethernet interface of Router A (10.0.0.1). 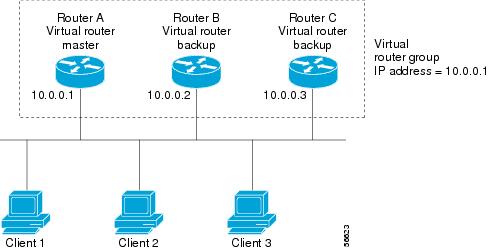 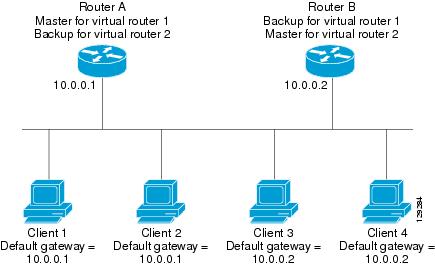 VRRP object tracking provides a way to ensure the best VRRP router is virtual router master for the group by altering VRRP priorities to the status of tracked objects such as interface or IP route states.

Object tracking is an independent process that manages creating, monitoring, and removing tracked objects such as the state-of-the line protocol of an interface. Clients such as the Hot Standby Router Protocol (HSRP), Gateway Load Balancing Protocol (GLBP), and now VRRP register their interest with specific tracked objects and act when the state of an object changes.

VRRP provides an interface to the tracking process. Each VRRP group can track multiple objects that may affect the priority of the VRRP router. Specify the object number to be tracked and VRRP will be notified of any change to the object. VRRP increments (or decrements) the priority of the virtual router based on the state of the object being tracked.

How Object Tracking Affects the Priority of a VRRP Router

The priority of a device can change dynamically if it has been configured for object tracking and the object that is being tracked goes down. The tracking process periodically polls the tracked objects and notes any change of value. The changes in the tracked object are communicated to VRRP, either immediately or after a specified delay. The object values are reported as either up or down. Examples of objects that can be tracked are the line protocol state of an interface or the reachability of an IP route. If the specified object goes down, the VRRP priority is reduced. The VRRP router with the higher priority can now become the virtual router master if it has the vrrp preempt command configured. See the “VRRP Object Tracking” section for more information on object tracking.

VRRP packets are rejected in any of the following cases:

VRRP supports In Service Software Upgrade (ISSU). An ISSU allows a high-availability (HA) system to run in Stateful Switchover (SSO) mode even when different versions of Cisco IOS software are running on the active and standby Route Processors (RPs) or line cards.

ISSU provides the ability to upgrade or downgrade from one supported Cisco IOS release to another while continuing to forward packets and maintain sessions, thereby reducing planned outage time. The ability to upgrade or downgrade is achieved by running different software versions on the active RP and standby RP for a short period of time to maintain state information between RPs. This feature allows the system to switch over to a secondary RP running upgraded (or downgraded) software and continue forwarding packets without session loss and with minimal or no packet loss. This feature is enabled by default.

For detailed information about ISSU, see the Cisco IOS In Service Software Upgrade Process document at the following URL:

With the introduction of the SSO—VRRP feature, VRRP is SSO aware. VRRP can detect when a router is failing over to the secondary RP and continue in its current group state.

Prior to being SSO aware, if VRRP was deployed on a router with redundant RPs, a switchover of roles between the active RP and the standby RP would result in the router relinquishing its activity as a VRRP group member and then rejoining the group as if it had been reloaded. The SSO—VRRP feature enables VRRP to continue its activities as a group member during a switchover. VRRP state information between redundant RPs is maintained so that the standby RP can continue the router’s activities within the VRRP during and after a switchover.

This feature is enabled by default. To disable this feature, use the no vrrp sso command in global configuration mode.

For more information, see the Stateful Switchover document at the following URL:

The following sections outline the steps necessary to configure VRRP:

Disabling VRRP on an Interface

Disabling VRRP on an interface allows the protocol to be disabled, but the configuration retained. This ability was added with the introduction of the VRRP MIB, RFC 2787, Definitions of Managed Objects for the Virtual Router Redundancy Protocol.

You can use a Simple Network Management Protocol (SNMP) management tool to enable or disable VRRP on an interface. Because of the SNMP management capability, the vrrp shutdown command was introduced to represent a method via the CLI for VRRP to show the state that had been configured using SNMP.

If a VRRP group is the IP address owner, its priority is fixed at 255 and cannot be reduced through object tracking.

Enabling VRRP MIB trap support is performed through the CLI, and the MIB is used for collecting reports. A trap notifies the network management station when a router becomes a Master or backup router. When an entry is configured from the CLI, the RowStatus for that group in the MIB immediately goes to the active state.

To enable the router to send SNMP VRRP notifications perform the following steps:

Router A will become the master for this group with priority 120.

Router B will become the master for this group with priority 200.

Router A will become the master for this group first because it has a higher IP address (10.1.0.2).

Advertising interval is the default 1 second.

The following example shows how to enable the VRRP MIB trap support functionality: