A VLAN is a switched network that is logically segmented by function, project team, or application, without regard to the physical locations of the users. VLANs have the same attributes as physical LANs, but you can group end stations even if they are not physically located on the same LAN segment. Any switch port can belong to a VLAN, and unicast, broadcast, and multicast packets are forwarded and flooded only to end stations in the VLAN. Each VLAN is considered a logical network, and packets destined for stations that do not belong to the VLAN must be forwarded through a router, as shown in Figure 11-1. Because a VLAN is considered a separate logical network, it contains its own bridge MIB information and can support its own implementation of spanning tree. See Chapter14, “Configuring STP” 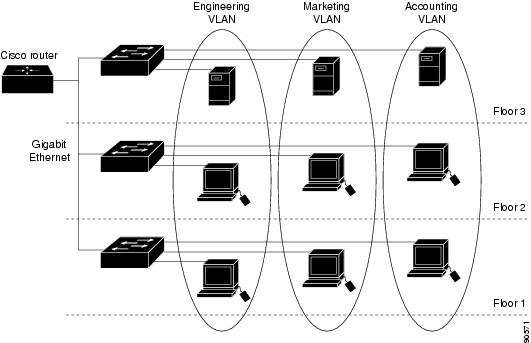 VLANs are often associated with IP subnetworks. For example, all the end stations in a particular IP subnet belong to the same VLAN. Interface VLAN membership on the switch is assigned manually on an interface-by-interface basis. When you assign switch interfaces to VLANs by using this method, it is known as interface-based, or static, VLAN membership.

The switch does not support VLAN Trunking Protocol (VTP).

This section includes these topics:

VLANs are identified with a number from 1 to 4094. VLAN IDs 1002 through 1005 are reserved for Token Ring and FDDI VLANs. VLAN IDs greater than 1005 are extended-range VLANs and are not stored in the VLAN database.

Although the switch supports a total of 4094 (normal-range and extended-range) VLANs, the number of routed ports, SVIs, and other configured features affects the use of the switch hardware.

See the “VLAN Configuration Guidelines” section for more information about the number of spanning-tree instances and the number of VLANs. The switch supports IEEE 802.1Q trunking for sending VLAN traffic over Ethernet ports.

Normal-range VLANs are VLANs with VLAN IDs 1 to 1005. You can add, modify or remove configurations for VLANs 2 to 1001 in the VLAN database. (VLAN IDs 1 and 1002 to 1005 are automatically created and cannot be removed.)

Configurations for VLAN IDs 1 to 1005 are written to the file vlan.dat (VLAN database), and you can display them by entering the show vlan privileged EXEC command. The vlan.dat file is stored in flash memory.

You can cause inconsistency in the VLAN database if you try to manually delete the vlan.dat file. If you want to modify the VLAN configuration, use the commands described in these sections and in the command reference for this release.

You can set these parameters when you create a new normal-range VLAN or modify an existing VLAN in the VLAN database:

The switch supports only Ethernet VLANs. You can configure parameters for FDDI and Token Ring VLANs and view the results in the vlan.dat file, but these parameters are not used.

For extended-range VLANs, you can configure only VLAN MTU.

This chapter does not provide configuration details for most of these parameters. For complete information on the commands and parameters that control VLAN configuration, see the command reference for this release.

You configure a port to belong to a VLAN by assigning a membership mode that specifies the kind of traffic that the port carries and the number of VLANs to which it can belong. Table 11-1 lists the membership modes and characteristics.

For more detailed definitions of access and trunk modes and their functions, see Table 11-4.

When a port belongs to a VLAN, the switch learns and manages the addresses associated with the port on a per-VLAN basis. For more information, see the “Managing the MAC Address Table” section.

The Cisco ME 3800X and 3600X have commands for configuring user network interface (UNI) VLANs to isolate traffic between some ports on a switch.

Because all ports on the ME 3800X and ME 3600X are NNIs, these commands have no effect on the switch.

For more efficient management of the MAC address table space available on the switch, you can control which VLANs learn MAC addresses by disabling MAC address learning on specific VLANs. See the “Disabling MAC Address Learning on a VLAN” section for more information.

On extended-range VLANs, you can change only the MTU size. All other characteristics must remain at the default conditions.

Extended-range VLANs use the default Ethernet VLAN characteristics and the MTU is the only parameter you can change.

Beginning in privileged EXEC mode, follow these steps to create or modify an Ethernet VLAN:

To delete a VLAN, use the no vlan vlan-id global configuration command. You cannot delete VLAN 1 or VLANs 1002 to 1005.

When you delete a VLAN, any ports assigned to that VLAN become inactive. They remain associated with the VLAN (and thus inactive) until you assign them to a new VLAN.

To return the VLAN name to the default settings, use the no name or no mtu VLAN configuration command.

This example shows how to create Ethernet VLAN 20, name it test20, and add it to the VLAN database:

This example shows how to create a new extended-range VLAN with all default characteristics, enter config-vlan mode, and save the new VLAN in the switch startup configuration file:

Assigning Static-Access Ports to a VLAN

You can assign a static-access port to a VLAN.

If you assign an interface to a VLAN that does not exist, the new VLAN is created. (See the “Creating or Modifying an Ethernet VLAN” section.)

Beginning in privileged EXEC mode, follow these steps to assign a port to a VLAN in the VLAN database:

This example shows how to configure a port as an access port in VLAN 2:

For more details about the show command options and explanations of output fields, see the command reference for this release.

A trunk is a point-to-point link between one or more Ethernet switch interfaces and another networking device such as a router or a switch. Ethernet trunks carry the traffic of multiple VLANs over a single link, and you can extend the VLANs across an entire network. The switch supports the IEEE 802.1Q industry-standard trunking encapsulation.

You can configure a trunk on a single Ethernet interface or on an EtherChannel bundle. For more information about EtherChannels, see Chapter28, “Configuring EtherChannels”

The IEEE 802.1Q trunks impose these limitations on the trunking strategy for a network:

Configuring an Ethernet Interface as a Trunk Port

Trunk ports can be grouped into EtherChannel port groups, but all trunks in the group must have the same configuration. When a group is first created, all ports follow the parameters set for the first port to be added to the group. If you change the configuration of one of these parameters, the switch propagates the setting that you entered to all ports in the group:

Beginning in privileged EXEC mode, follow these steps to configure a port as an IEEE 802.1Q trunk port:

This example shows how to configure a port as an IEEE 802.1Q trunk with VLAN 33 as the native VLAN:

Defining the Allowed VLANs on a Trunk

VLAN 1 is the default VLAN on all trunk ports in all Cisco switches, and it has previously been a requirement that VLAN 1 always be enabled on every trunk link. The VLAN 1 minimization feature allows you to disable VLAN 1 on any individual VLAN trunk link so that no user traffic (including spanning-tree advertisements) is sent or received on VLAN 1. You do this by removing VLAN 1 from the allowed VLAN list.

To reduce the risk of spanning-tree loops or storms, you can disable VLAN 1 on any individual VLAN trunk port by removing VLAN 1 from the allowed list. When you remove VLAN 1 from a trunk port, the interface continues to send and receive management traffic, for example, Cisco Discovery Protocol (CDP), Port Aggregation Protocol (PAgP), and Link Aggregation Control Protocol (LACP) in VLAN 1.

Beginning in privileged EXEC mode, follow these steps to modify the allowed list of an IEEE 802.1Q trunk:

To return to the default allowed VLAN list of all VLANs, use the no switchport trunk allowed vlan interface configuration command.

This example shows how to remove VLAN 2 from the allowed VLAN list on a port:

When using Ethernet Virtual Connections (EVCs), you can configure an Ethernet flow point (EFP) service instance only on trunk ports with no allowed VLANs. Any other configuration is not allowed. See the “Configuring VLANs” chapter for more information.

The native VLAN can be assigned any VLAN ID.

Beginning in privileged EXEC mode, follow these steps to configure the native VLAN on an IEEE 802.1Q trunk:

To return to the default native VLAN, VLAN 1, use the no switchport trunk native vlan interface configuration command.

If a packet has a VLAN ID that is the same as the sending port native VLAN ID, the packet is sent untagged; otherwise, the switch sends the packet with a tag.

Load sharing divides the bandwidth supplied by parallel trunks that connect switches. To avoid loops, STP normally blocks all but one parallel link between switches. Using load sharing, you divide the traffic between the links according to the VLAN to which the traffic belongs.

Figure 11-2 shows two trunks connecting supported switches. In this example, the switches are configured as follows: 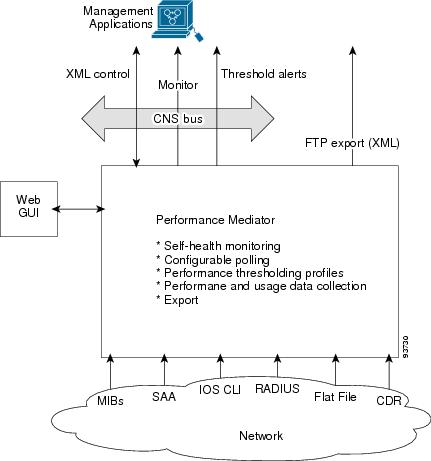 Beginning in privileged EXEC mode on Switch A, follow these steps to configure the network shown in Figure 11-2. Note that you can use any interface numbers; those shown are examples only.

You can configure parallel trunks to share VLAN traffic by setting different path costs on a trunk and associating the path costs with different sets of VLANs, blocking different ports for different VLANs. The VLANs keep the traffic separate and maintain redundancy in the event of a lost link.

In Figure 11-3, Trunk ports 1 and 2 are configured as 100Base-T ports. These VLAN path costs are assigned:

Beginning in privileged EXEC mode, follow these steps to configure the network shown in Figure 11-3: