This chapter describes how to configure your Catalyst 3750 switch to redirect traffic to wide-area application engines (such as the Cisco Cache Engine 550) by using the Web Cache Communication Protocol (WCCP). This software release supports only WCCP version 2 (WCCPv2).

To use this feature, the stack master must be running the IP services image. Unless otherwise noted, the term switch refers to a standalone switch and to a switch stack.

For complete syntax and usage information for the commands used in this chapter, see the “WCCP Router Configuration Commands” section in the “System Management Commands” part of the Cisco IOS Configuration Fundamentals Command Reference, Release 12.4 on Cisco.com.

The WCCP and Cisco cache engines (or other application engines running WCCP) localize traffic patterns in the network, enabling content requests to be fulfilled locally.

WCCP enables supported Cisco routers and switches to transparently redirect content requests. With transparent redirection, users do not have to configure their browsers to use a web proxy. Instead, they can use the target URL to request content, and their requests are automatically redirected to an application engine. The word transparent means that the end user does not know that a requested file (such as a web page) came from the application engine instead of from the originally specified server.

With WCCP, the application-engine cluster (a series of application engines) can service multiple routers or switches, as shown Figure 45-1. 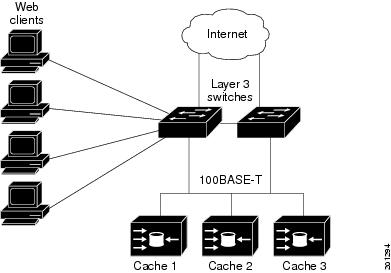 This sequence of events describes the WCCP message exchange:

In the exchange of WCCP protocol messages, the designated application engine and the WCCP-enabled switch negotiate these items:

The application engine is overloaded and has no room to service the packets.

You can configure WCCP to classify traffic for redirection, such as FTP, proxy-web-cache handling, and audio and video applications. This classification, known as a service group, is based on the protocol type (TCP or UDP) and the Layer 4 source destination port numbers. The service groups are identified either by well-known names such as web-cache, which means TCP port 80, or a service number, 0 to 99. Service groups are configured to map to a protocol and Layer 4 port numbers and are established and maintained independently. WCCP allows dynamic service groups, where the classification criteria are provided dynamically by a participating application engine.

After WCCP is configured on the switch, the switch forwards all service group packets received from clients to the application engines. However, these packets are not redirected:

To disable caching for specific clients, servers, or client/server pairs, you can use a WCCP redirect access control list (ACL). Packets that do not match the redirect ACL bypass the cache and are forwarded normally.

Before WCCP packets are redirected, the switch examines ACLs associated with all inbound features configured on the interface and permits or denies packet forwarding based on how the packet matches the entries in the ACL.

Only permit ACL entries are supported in WCCP redirect lists.

Stack members receive the WCCP information from the master switch and program their hardware.

These WCCP features are not supported in this software release:

These sections describe how to configure WCCP on your switch:

Before configuring WCCP on your switch, make sure to follow these configuration guidelines:

For WCCP packet redirection to operate, you must configure the switch interface connected to the client to redirect inbound packets.

Beginning in privileged EXEC mode, follow these steps to enable the cache service, to set a multicast group address or group list, to configure routed interfaces, to redirect inbound packets received from a client to the application engine, enable an interface to listen for a multicast address, and to set a password. This procedure is required.

Only permit ACL entries are being used in the redirect-list; deny entries are unsupported.

To monitor and maintain WCCP, use one or more of the privileged EXEC commands in Table 45-2 :