This chapter describes how to use Hot Standby Router Protocol (HSRP) on the Catalyst 3750 switch to provide routing redundancy for routing IP traffic not dependent on the availability of any single router. HSRP for IPv4 is supported on switches running the IP base or IP services image. To use HSRP for IPv6, see Chapter 39, "Configuring IPv6 Unicast Routing."

You can also use a version of HSRP in Layer 2 mode to configure a redundant command switch to take over cluster management if the cluster command switch fails. For more information about clustering, see Chapter 6, "Clustering Switches" and see the Getting Started with Cisco Network Assistant, available on Cisco.com.

Switch command reference for this release 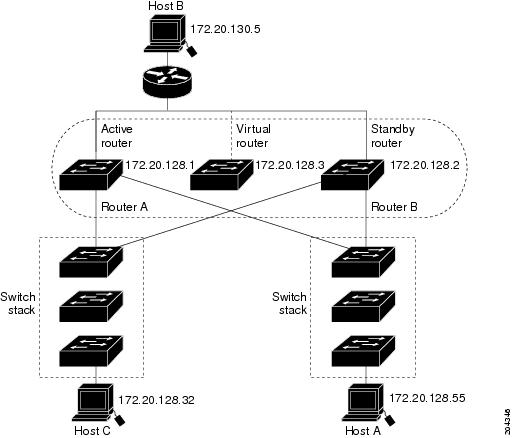 HSRP for IPv4 and HSRP for IPv6 are mutually exclusive. You cannot enable both at the same time.

You can configure up to 32 instances of HSRP groups.

In the configuration procedures, the specified interface must be a Layer 3 interface:

Configure only one instance of an FHRP. The switches support HSRPv1, HSRPv2, and HSRP for IPv6.

Assigning a priority allows you to select the active and standby routers. If preemption is enabled, the router with the highest priority becomes the active router. If priorities are equal, the current active router does not change.

To enable MHSRP and load balancing, you configure two routers as active routers for their groups, with virtual routers as standby routers. This example shows how to enable the MHSRP configuration shown in Figure 42-2. You need to enter the standby preempt interface configuration command on each HSRP interface so that if a router fails and comes back up, the preemption occurs and restores load balancing.

If one of the situations in Table 42-2 occurs, this message appears: