This chapter describes how to configure port tracking.

Cisco SAN switches offer the port tracking feature on . This feature uses information about the operational state of the link to initiate a failure in the link that connects the edge device. This process of converting the indirect failure to a direct failure triggers a faster recovery process towards redundant links. When enabled, the port tracking feature brings down the configured links based on the failed link and forces the traffic to be redirected to another redundant link.

Port tracking allows you to use information about the operational state of the link so that you can initiate a failure in the link that connects the edge device. Converting the indirect failure to a direct failure triggers a faster recovery process towards redundant links. When enabled, port tracking brings down the configured links based on the failed link and forces the traffic to be redirected to another redundant link.

Generally, hosts can instantly recover from a link failure on a link that is immediately (direct link) connected to a switch. However, recovering from an indirect link failure between switches in a WAN or MAN fabric with a keepalive mechanism is dependent on several factors such as the timeout values (TOVs) and on registered state change notification (RSCN) information.

In the following figure, when the direct link 1 to the host fails, recovery can be immediate. However, when the ISL 2 fails between the two switches, recovery depends on TOVs, RSCNs, and other factors. 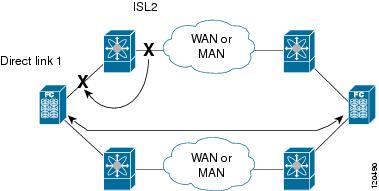 Port tracking monitors and detects failures that cause topology changes and brings down the links that connect the attached devices. When you enable this feature and explicitly configure the linked and tracked ports, the switch software monitors the tracked ports and alters the operational state of the linked ports on detecting a link state change.

Port tracking has the following features:

You can link ports using one of two methods: 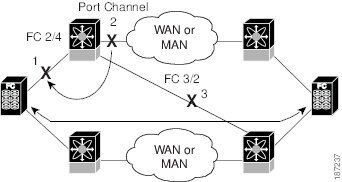 Monitoring Ports in a VSAN

If you configure this feature, the linked port is up only when the VSAN is up on the tracked port.

The specified VSAN does not have to be the same as the port VSAN of the linked port.

Monitoring Ports in a VSAN

You can monitor a tracked port in a specific VSAN.

If a tracked port flaps frequently, tracking ports using the operational binding feature may cause frequent topology changes. You might choose to keep the port in the down state until you are able to resolve the reason for these frequent flaps. Keeping the flapping port in the down state forces the traffic to flow through the redundant path until the primary tracked port problems are resolved. When the problems are resolved and the tracked port is back up, you can explicitly enable the interface.

Forcefully Shutting Down a Tracked Port

You can forcefully shut down a tracked port.