The purpose of High Availability (HA) is to limit the impact of failures—both hardware and software— within a system. The Cisco NX-OS operating system is designed for high availability at the network, system, and service levels.

The following Cisco NX-OS features minimize or prevent traffic disruption in the event of a failure:

Redundancy— redundancy at every aspect of the software architecture.

Isolation of processes— isolation between software components to prevent a failure within one process disrupting other processes.

Restartability—Most system functions and services are isolated so that they can be restarted independently after a failure while other services continue to run. In addition, most system services can perform stateful restarts, which allow the service to resume operations transparently to other services.

One or two VSMs that run within Virtual Machines (VMs).

Virtual Ethernet Modules (VEMs) that run within virtualization servers. VEMs are represented as modules within the VSM.

Figure 1-1 shows the HA components and the communication links between them. 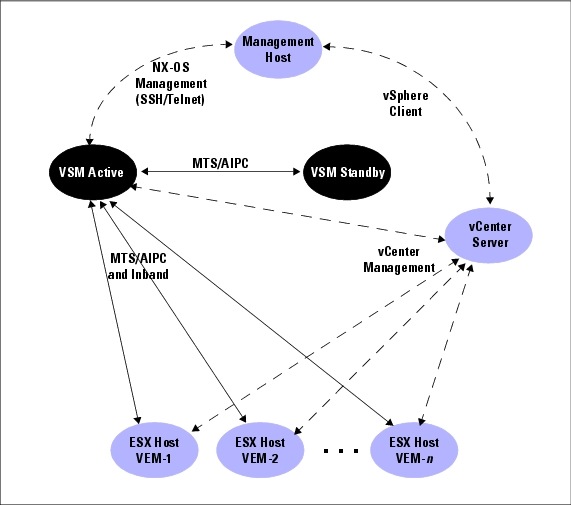 The Cisco NX-OS software has independent processes, known as services, that perform a function or set of functions for a subsystem or feature set. Each service and service instance runs as an independent, protected process. This way of operating provides a highly fault-tolerant software infrastructure and fault isolation between services. A failure in a service instance will not affect any other services running at that time. Additionally, each instance of a service can run as an independent process, which means that two instances of a routing protocol can run as separate processes.

Cisco NX-OS processes run in a protected memory space independently of each other and the kernel. This process isolation provides fault containment and enables rapid restarts. Process restartability ensures that process-level failures do not cause system-level failures. In addition, most services can perform stateful restarts, which allows a service that experiences a failure to be restarted and to resume operations transparently to other services within the platform and to neighboring devices within the network.

The Cisco Nexus 1000V supports redundant VSM virtual machines—a primary and a secondary—running as an HA pair. Dual VSMs operate in an active/standby capacity in which only one of the VSMs is active at any given time, while the other acts as a standby backup. The VSMs are configured as either primary or secondary as a part of the Cisco Nexus 1000V installation. The state and configuration remain constantly synchronized between the two VSMs to provide a stateful switchover if the active VSM fails.

The Cisco Nexus 1000V high availability at the network level includes port channels and the Link Aggregation Control Protocol (LACP). A port channel bundles physical links into a channel group to create a single logical link that provides the aggregate bandwidth of up to eight physical links. If a member port within a port channel fails, the traffic previously carried over the failed link switches to the remaining member ports within the port channel.

The primary and secondary VSM use a VSM to VSM heartbeat to do the following within their domain:

Detect the presence of another VSM.

After the initial contact and role negotiation, the active and standby VSMs unicast the following in heartbeat messages at one-second intervals:

Control flags requesting action by the other VSM

The remainder of this section describe how the VSM to VSM heartbeat mechanism works including observance of the following intervals.

When there is no communication between redundant VSMs or Cisco Nexus 1010s, neither can detect the presence of the other. The active drops the standby. The standby interprets the lack of response as a sign that the active has failed and it also becomes active. This is what is referred to as active-active or split-brain, as both are trying to control the system by connecting to Virtual Center and communicating with the VEMs.

Since redundant VSMs or Cisco Nexus 1010s use the same IP address for their management interface, remote SSH/Telnet connections may fail, as a result of the path to this IP address changing in the network. For this reason, it is recommended that you use the consoles during a split-brain conflict.

After a split-brain condition is resolved and the primary and secondary are communicating again, the configuration at the secondary takes precedence. Use care if changes are made when both are active.

Depending on the specific network failure that caused it, each VSM may reach a different, possibly overlapping, subset of VEMs. When the VSM that was in standby state becomes a new active, it broadcasts a request to all VEMs to switch to it as the current active device. Whether a VEM switches to the new active VSM or not, depends on the following:

The connectivity between each VEM and the two VSMs.

Whether the VEM receives the request to switch.

If there is a network communication failure where the standby VSM recieves heartbeat requests but the active does not receive a response, the following occurs:

The active VSM declares that the standby VSM is not present.

The standby VSM remains in standby state and continues receiving heartbeats from the active VSM.

When two-way communication is resumed, the standby VSM detects the inconsistency and reloads.

If a one-way communication failure occurs in the active to standby direction, it is equivalent to a total loss of communication. This is because a standby VSM only sends heartbeats in response to active VSM requests.

Before configuring the Cisco Nexus 1000V, Cisco recommends that you read and become familiar with the following documentation: