IP version 6 (IPv6) provides extended addressing capability beyond those provided in IP version 4 (IPv4) in Cisco MDS NX-OS. The architecture of IPv6 has been designed to allow existing IPv4 users to transition easily to IPv6 while providing services such as end-to-end security, quality of service (QoS), and globally unique addresses.

For Cisco NX-OS features that use IP addressing, refer to the chapters in this guide that describe those features for information on IPv6 addressing support.

This section describes the IPv6 features supported by Cisco MDS NX-OS and includes the following topics:

IPv6 extends the address space by quadrupling the number of network address bits from 32 bits (in IPv4) to 128 bits, which provides many more globally unique IP addresses. By being globally unique, IPv6 addresses enable global reachability and end-to-end security for networked devices, functionality that is crucial to the applications and services that are driving the demand for more addresses.

IPv6 addresses are represented as a series of 16-bit hexadecimal fields separated by colons (:) in the format x:x:x:x:x:x:x:x. The following are examples of IPv6 addresses:

Two colons (::) can be used only once in an IPv6 address to represent the longest successive hexadecimal fields of zeros.

An IPv6 address prefix, in the format ipv6-prefix/prefix-length, can be used to represent bit-wise contiguous blocks of the entire address space. The ipv6-prefix is specified in hexadecimal using 16-bit values between the colons. The prefix-length is a decimal value that indicates how many of the high-order contiguous bits of the address comprise the prefix (the network portion of the address). For example, 2001:0DB8:8086:6502::/32 is a valid IPv6 prefix.

Global IPv6 addresses are defined by a global routing prefix, a subnet ID, and an interface ID. Figure 8-1 shows the structure of a global address.

The aggregatable global address typically consists of a 48-bit global routing prefix and a 16-bit subnet ID or Site-Level Aggregator (SLA). In the IPv6 aggregatable global unicast address format document (RFC 2374), the global routing prefix included two other hierarchically structured fields named Top-Level Aggregator (TLA) and Next-Level Aggregator (NLA).The IETF decided to remove the TLS and NLA fields from the RFCs because these fields are policy-based. Some existing IPv6 networks deployed before the change might still be using networks based on the older architecture.

A 16-bit subnet field called the subnet ID could be used by individual organizations to create their own local addressing hierarchy and to identify subnets. A subnet ID is similar to a subnet in IPv4, except that an organization with an IPv6 subnet ID can support up to 65,535 individual subnets.

An interface ID is used to identify interfaces on a link. The interface ID must be unique to the link. They may also be unique over a broader scope. In many cases, an interface ID will be the same as, or based on, the link-layer address of an interface, which results in a globally unique interface ID. Interface IDs used in aggregatable global unicast and other IPv6 address types must be 64 bits long and constructed in the modified EUI-64 format.

Cisco MDS NX-OS supports IEEE 802 interface types (for example, Gigabit Ethernet interfaces). The first three octets (24 bits) are taken from the Organizationally Unique Identifier (OUI) of the 48-bit link-layer address (MAC address) of the interface, the fourth and fifth octets (16 bits) are a fixed hexadecimal value of FFFE, and the last three octets (24 bits) are taken from the last three octets of the MAC address. The construction of the interface ID is completed by setting the Universal/Local (U/L) bit—the seventh bit of the first octet—to a value of 0 or 1. A value of 0 indicates a locally administered identifier; a value of 1 indicates a globally unique IPv6 interface identifier (see Figure 8-2). 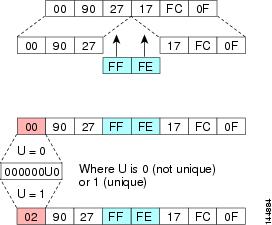 Internet Control Message Protocol (ICMP) in IPv6 functions the same as ICMP in IPv4—ICMP generates error messages such as ICMP destination unreachable messages, and informational messages such as ICMP echo request and reply messages. Additionally, ICMP packets in IPv6 are used in the IPv6 neighbor discovery process, path MTU discovery, and the Multicast Listener Discovery (MLD) protocol for IPv6. MLD is based on version 2 of the Internet Group Management Protocol (IGMP) for IPv4. 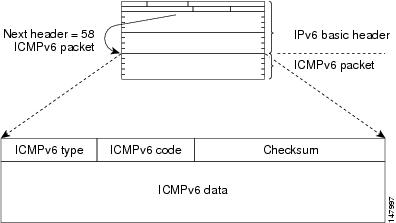 As in IPv4, path MTU discovery in IPv6 allows a host to dynamically discover and adjust to differences in the MTU size of every link along a given data path. In IPv6, however, fragmentation is handled by the source of a packet when the path MTU of one link along a given data path is not large enough to accommodate the size of the packets. Having IPv6 hosts handle packet fragmentation saves IPv6 router processing resources and helps IPv6 networks run more efficiently.

In IPv4, the minimum link MTU is 68 octets, which means that the MTU size of every link along a given data path must support an MTU size of at least 68 octets.

The IPv6 neighbor discovery process uses ICMP messages and solicited-node multicast addresses to determine the link-layer address of a neighbor on the same network (local link), verify the reachability of a neighbor, and keep track of neighboring routers. 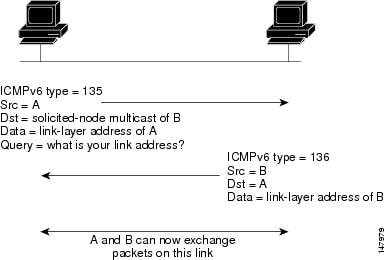 Neighbor solicitation messages are also used to verify the reachability of a neighbor after the link-layer address of a neighbor is identified. Neighbor unreachability detection identifies the failure of a neighbor or the failure of the forward path to the neighbor, and is used for all paths between hosts and neighboring nodes (hosts or routers). Neighbor unreachability detection is performed for neighbors to which only unicast packets are being sent and is not performed for neighbors to which multicast packets are being sent.

A neighbor is considered reachable when the neighbor returns a positive acknowledgment indicating that it has received and processed packets previously sent to it. A positive acknowledgment could be from an upper-layer protocol such as TCP indicating that a connection is making forward progress (reaching its destination) or the receipt of a neighbor advertisement message in response to a neighbor solicitation message. If packets are reaching the peer, they are also reaching the next-hop neighbor of the source. Therefore, forward progress is also a confirmation that the next-hop neighbor is reachable.

A neighbor advertisement message that has the solicited flag set to a value of 0 must not be considered as a positive acknowledgment that the forward path is still working.

All interfaces on IPv6 nodes must have a link-local address, which is automatically configured from the identifier for an interface and the link-local prefix FE80::/10. A link-local address enables a node to communicate with other nodes on the link and can be used to further configure the node.

Nodes can connect to a network and automatically generate site-local and global IPv6 address without the need for manual configuration or help of a server, such as a DHCP server. With IPv6, a router on the link advertises in router advertisement (RA) messages any site-local and global prefixes, and its willingness to function as a default router for the link. RA messages are sent periodically and in response to router solicitation messages, which are sent by hosts at system startup. (See Figure 8-8.)

A node on the link can automatically configure site-local and global IPv6 addresses by appending its interface identifier (64 bits) to the prefixes (64 bits) included in the RA messages. The resulting 128-bit IPv6 addresses configured by the node are then subjected to duplicate address detection to ensure their uniqueness on the link. If the prefixes advertised in the RA messages are globally unique, then the IPv6 addresses configured by the node are also guaranteed to be globally unique. Router solicitation messages, which have a value of 133 in the Type field of the ICMP packet header, are sent by hosts at system startup so that the host can immediately autoconfigure without needing to wait for the next scheduled RA message. 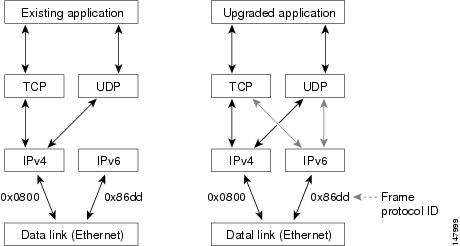 In Figure 8-10, an application that supports dual IPv4 and IPv6 protocol stacks requests all available addresses for the destination host name www.a.com from a DNS server. The DNS server replies with all available addresses (both IPv4 and IPv6 addresses) for www.a.com. The application chooses an address—in most cases, IPv6 addresses are the default choice—and connects the source node to the destination using the IPv6 protocol stack.

The tasks in this section explain how to implement IPv6 basic connectivity. Each task in the list is identified as either required or optional. This section includes the following topics:

You can configure IPv6 addresses on the following interface types:

The ipv6-address argument in the ipv6 address command must be in the form documented in RFC 2373, where the address is specified in hexadecimal using 16-bit values between colons.

The ipv6-prefix argument in the ipv6 address command must be in the form documented in RFC 2373, where the address is specified in hexadecimal using 16-bit values between colons.

The solicited-node multicast address is used in the neighbor discovery process.

The maximum number of IPv6 addresses (static and autoconfigured) allowed on an interface is eight, except on the management (mgmt 0) interface where only one static IPv6 address can be configured.

To configure an IPv6 address on an interface and enable IPv6 routing, follow these steps:

When an interface in a Cisco networking device is configured with both an IPv4 and an IPv6 address, the interface can send and receive data on both IPv4 and IPv6 networks.

To configure an interface in a Cisco networking device to support both the IPv4 and IPv6 protocol stacks, follow these steps:

You can display information to verify the configuration and operation of basic IPv6 connectivity.

In the following example, the show ipv6 interface command is used to verify that IPv6 addresses are configured correctly for the Gigabit Ethernet 6/1 interface:

You can configure the following neighbor discovery parameters:

We recommend that you use the factory-defined defaults for these parameters.

To configure the number of duplicate address detection attempts, follow these steps:

The show ipv6 interface command displays the configuration of the neighbor discovery parameters.

To configure a IPv6 static route, follow these steps:

The show ipv6 route command displays the IPv6 route table for the switch.

If IPv6-ACLs are already configured in a Gigabit Ethernet interface, you cannot add this interface to a Ethernet PortChannel group. See the Cisco MDS 9000 Family NX-OS Security Configuration Guide for information on configuring IPv6-ACLs.

Follow these guidelines when configuring IPv6-ACLs for Gigabit Ethernet interfaces:

If you use the log-deny option, a maximum of 50 messages are logged per second.

The established option is ignored when you apply IPv6-ACLs containing this option to Gigabit Ethernet interfaces.

Cisco MDS NX-OS does not support any transitioning mechanisms from IPv4 to IPv6. However, you can use the transitioning schemes in the Cisco router products for this purpose. For information on configuring Cisco routers to transition your network, refer to the “Implementing Tunneling for IPv6” chapter in the Cisco IOS IPv6 Configuration Guide.

Use the show ips ipv6 neighbours interface command for information about IPv6 neighbors for an interface.

Use the show ips ipv6 prefix-list interface command for information about IPv6 prefixes for an interface.

Use the show ips ipv6 interface command for information about the IPv6 routes for an interface.

Use the show ips ipv6 routers interface command for information about IPv6 routers for an interface.

Use the show ips ipv6 traffic interface command for information about IPv6 traffic statistics for an interface.