■      Supported Scale with the ACI Simulator

The Cisco Application Centric Infrastructure (ACI) is conceptualized as a distributed, scalable, multi-tenant infrastructure with external endpoint connectivity that is controlled and grouped through application centric policies. The Cisco Application Policy Infrastructure Controller (APIC) is the key architectural component that is the unified point of automation, management, monitoring, and programmability for the Cisco ACI. The Cisco APIC supports the deployment, management and monitoring of any application anywhere, with a unified operations model for physical and virtual components of the infrastructure. The Cisco APIC programmatically automates network provisioning and control based on the application requirements and policies. It is the central control engine for the broader cloud network, simplifying management while allowing tremendous flexibility in how application networks are defined and automated and also providing northbound REST APIs. The Cisco APIC is a distributed system implemented as a cluster of many controller instances.

The intent of the Cisco ACI Simulator is to provide real, fully-featured Cisco APIC software, along with a simulated fabric infrastructure of leaf switches and spine switches in one physical server. You can use the Cisco ACI Simulator to understand features, exercise APIs, and initiate integration with third-party orchestration systems and applications. The native GUI and CLI of the Cisco APIC use the same APIs that are published to third parties.

The Cisco ACI Simulator includes simulated switches, so you cannot validate a data path. However, some of the simulated switch ports have been mapped to the front-panel server ports, which allows you to connect external management entities such as ESX servers, vCenters, vShields, bare metal servers, Layer 4 to Layer 7 services, AAA systems, and other physical or virtual service appliances. In addition, the Cisco ACI Simulator allows simulation of faults and alerts to facilitate testing and demonstrate features.

One instance of the production Cisco APIC will be shipped per server appliance. By contrast, the Cisco ACI Simulator includes three actual Cisco APIC instances and two simulated leaf switches and two simulated spine switches in a single server. As a result, the performance of the Cisco ACI Simulator will be slower than deployments on actual hardware. You can perform operations on the simulated fabric using any of the following functional interfaces: 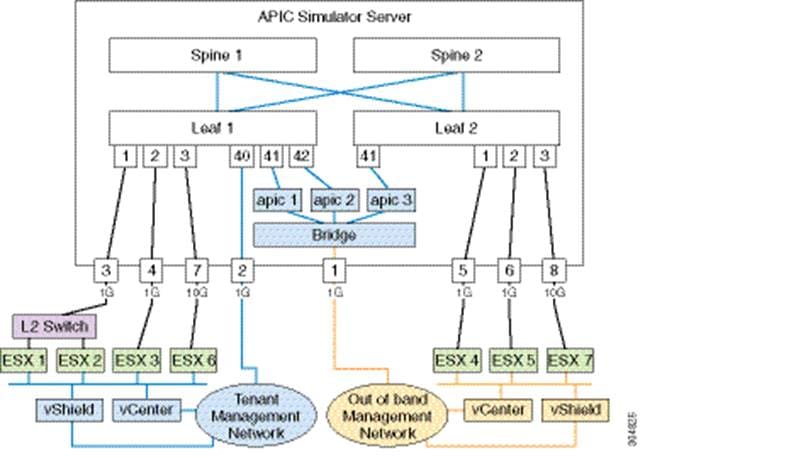 This section lists the key software features of the Cisco ACI Simulator that are available in this release.

■      Implementation on a distributed framework across a cluster of appliances

■      Health Scores for key Managed Objects (tenants, application profiles, switches, and so on)

This release of the Cisco ACI Simulator supports the following software:

■      The Cisco ACI Simulator does not support Smart Licensing.

—     Default names in the initial setup for node names and the cluster configuration.

—     Cluster size and the number of Cisco APIC nodes.

■      The Cisco ACI Simulator does not support the following:

■      Keep the vMotion PNIC outside of the Simulator network.

■      The infrastructure EPG in the Infra tenant is for internal use only.

■      The MP-BGP route reflector and the OSPF external routed network protocols do not work if you are using the simulator.

■      The Cisco ACI Simulator simulates faults for counters, which might cause the health score of the top-of-rack (TOR) switch to go down. The faults look similar to the following example:

■      Service nodes should be connected using the out-of-band connection. The service node and the Cisco APIC should be in the same subnet. For information on connecting Layer 4 to Layer 7 services to the Simulator, see the Cisco Application Centric Infrastructure Simulator Installation Guide.

■      You can test Layer 4 to Layer 7 services by connecting your service appliance using in-band management connectivity between the simulator and the appliance.