The support for NAC-3310 has been dropped from NAC Guest Server Release 2.0.5.

When you receive the Guest Server, perform the initial configuration described in Command Line Configuration. If you need to perform CD installation to re-image the appliance, refer to Re-Imaging the Appliance for instructions.

To perform initial configuration, you need to connect to your appliance and access its command line, as described below.

You can access the Cisco NAC Guest Server command line in one of the following methods:

Connect a monitor and keyboard directly to the machine via the keyboard/video monitor connectors on the back panel of the machine as shown in Figure 2-2 for NAC-3415 and Figure 2-4 for NAC-3315.

Connect a null modem serial cable from a workstation (PC/laptop) to the serial port on the appliance. Open a serial connection on the workstation using terminal emulation software (such as HyperTerminal or SecureCRT) with settings set to 9600 baud, 8 data bits, no parity, 1 stop bit, no flow control.

Connect a straight-through Category 5 Ethernet cable to the eth0 (NIC1) 10/100/1000 Ethernet port on the back panel of the appliance and to your local area network.

Proceed to the instructions in Command Line Configuration.

Configure IP Address and Default Gateway so that the appliance can be accessed on the network.

When logging in for the first time after initial installation, or after re-imaging the appliance, you need to set up a password for the root user.

Connect to the command line interface using either keyboard and monitor connection to the appliance, or serial console connection.

Login as the root user. The login user name for the console is root as shown in Figure 2-5. Cisco recommends using a strong password that is not based on a dictionary word, has a minimum of 6 characters, and contains at least 5 different characters. 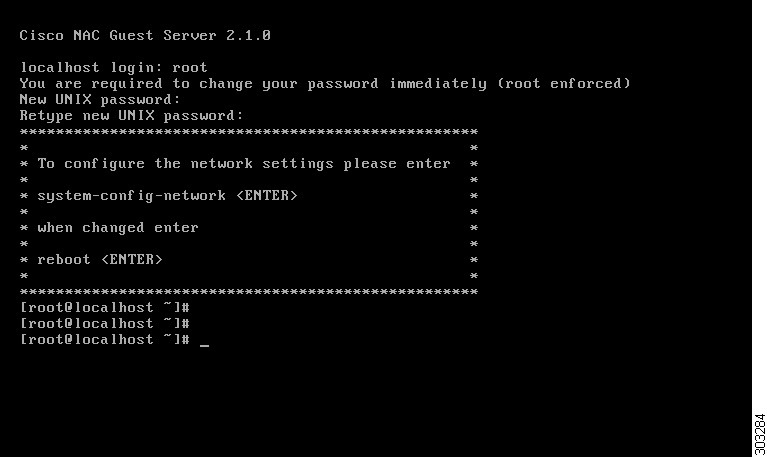 Using either a keyboard and monitor connection to the appliance, or serial console connection, authenticate to the command line interface, as shown in Figure 2-7. The user name for the console is root and the password is the one you configured as described in Initial Log In.

Figure 2-7 Authenticating to the Console To configure the network settings, type the command system-config-network and press <Enter>. The Select A Device menu appears as shown in Figure 2-8. Select the eth0 interface from the list using the up and down arrow keys and press <Enter>.

You can now enter all the correct network settings for the appliance as shown in Figure 2-9. 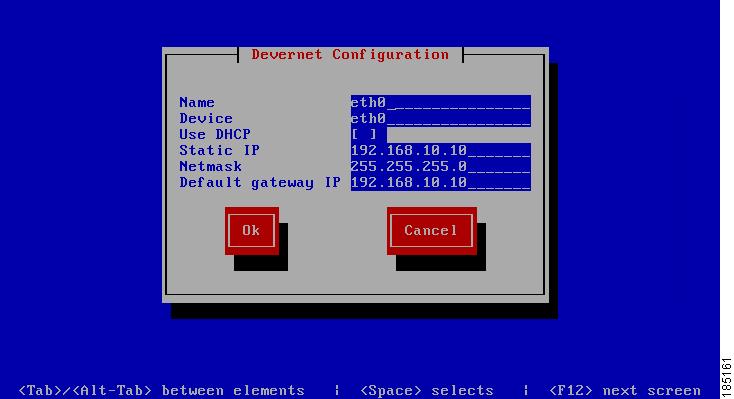 Static IP—The IP Address that you want to assign to the Cisco NAC Guest Server.

You can use the Tab key, Arrow keys or <Enter> to move between fields. When finished, move to the OK button and press <Enter>.

Exit the system-config-network by selecting Quit from the Select A Device as shown in Figure 2-10.

At the command line, either reboot the appliance by typing reboot and pressing <Enter>, or follow the instructions to Change Root Password before entering reboot.

Cisco recommends using a strong password that is not based on a dictionary word, has a minimum of 6 characters, and contains at least 5 different characters.

Continue to Chapter 3 "System Setup" to access and configure the admin console.

When the Cisco NAC Guest Server is shipped, a default version of the system image is already preloaded on the unit, so imaging is not required. If you need to re-image the appliance to factory defaults, you can download the system image ISO from Cisco Secure Software Downloads on Cisco.com and burn this ISO file to a blank CD-ROM.

Once you have the system image on a bootable CD, you can perform the following steps to install the system image onto the appliance. Refer to the latest version of the Release Notes for Cisco NAC Guest Server, Release 2.1 for additional details.

Imaging the appliance deletes all data on the appliance. There is no method of recovery of data from the Guest Server after imaging has started. Make sure to backup any data that you need before starting this process.

Burn this ISO file to a blank CD-ROM to create a bootable disk.

Decide whether to perform the installation using a keyboard and monitor connection or over a serial console.

Connect either a keyboard and monitor to the back of the unit, or

Attach a null modem cable to the serial port on the back of the appliance. From the computer to which the serial cable is attached, run a terminal emulation program with settings set to: 9600 baud, 8 data bits, no parity, 1 stop bit, no flow control.

The appliance should now boot from the CD-ROM drive and the initial install is displayed as shown in Figure 2-11.

If your Cisco NAC Guest Server does not read the software on the CD ROM drive and instead attempts to boot from the hard disk, you need to change the appliance settings to boot from CD ROM as described in Configuring Boot Settings on NAC-3415 / NAC-3315 Based Appliances. At the Initial Installation, run the installation according to the method you are connected to the appliance:

If directly connected using a keyboard and monitor, type install and press <Enter>.

If you are using a serial connection, type installserial at the boot prompt, then press <Enter>.

The system image is automatically installed on the hard disk as shown in Figure 2-12. When the install image is successfully transferred, the system reboots automatically as shown in Figure 2-13. 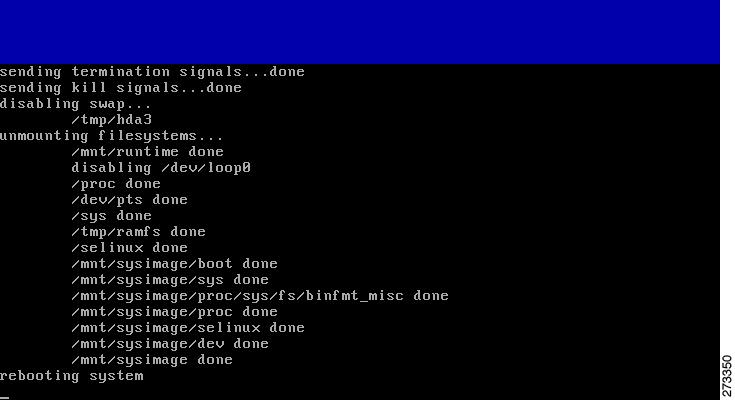 The CD-ROM automatically ejects from the appliance.

Remove the CD and store it safely so that the appliance does not accidentally reboot from it at a later time.

The Cisco NAC Guest Server appliance boots and runs the final setup of the image automatically. The imaging process is complete when the login is displayed as shown in Figure 2-14. Continue to the instructions in Initial Log In to complete the installation.

If your appliance does not read the software on the CD ROM drive, and instead attempts to boot from the hard disk, use the following steps to configure the appliance to boot from CD ROM before attempting to re-image or upgrade the Cisco NAC Guest Server from CD.

Press the F10 key while the system is booting. Change the setting to boot from CD ROM by selecting CD-ROM Drive from the menu and pressing the plus (+) key as shown in Figure 2-16. 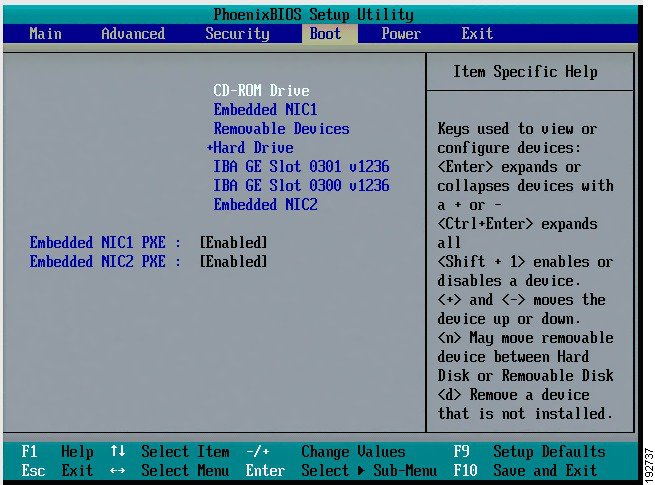 Press the F10 key to Save and Exit.