Chapter: Before You Begin

Overview of the Solution Components

Deployment Architecture for the ASA 1000V

Overview of the Solution Components

The Cisco ASA 1000V Cloud Firewall is a virtual appliance that was developed using the ASA infrastructure to secure the tenant edge in multitenant environments with Nexus 1000V deployments. It provides edge features and functionality (including site-to-site VPN, NAT, and DHCP), acts as a default gateway, and secures the virtual machines (VMs) within the tenant against any network-based attacks.

The Cisco ASA 1000V is deployed with the following components:

Cisco Nexus 1000V—The required virtual switch for running VMs such as the ASA 1000V in a virtual data center.

Cisco ASA 1000V—The virtual service node runs as a VM to secure the tenant edge in the virtualized environment.

Deployment Architecture for the ASA 1000V

How Policies Are Applied to the ASA 1000V

Configuration Model for the ASA 1000V 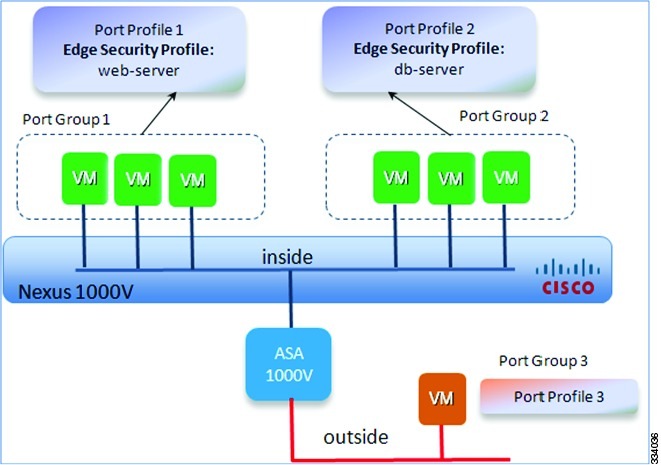 The configuration shown in Figure 1-1 includes a VM on the outside interface of the ASA 1000V. This VM does not require a security profile applied to it in order to send and receive traffic through the ASA 1000V. The VM requires the port profile and port group.

Resource Objects for the ASA 1000V

Cisco VNMC is a model-driven, multitenant, multi-device manager that allows sharing of policies between many ASA 1000Vs. Cisco VNMC organizes objects into five distinct folder or organization levels for tenant management.

Named policy objects can be defined at a higher level folder and referenced by policies and objects created in lower levels. Name resolution uses a tree model in which names are resolved starting at the level in which the name is referenced, moving up the hierarchy towards the root. Resource Objects for the ASA 1000V 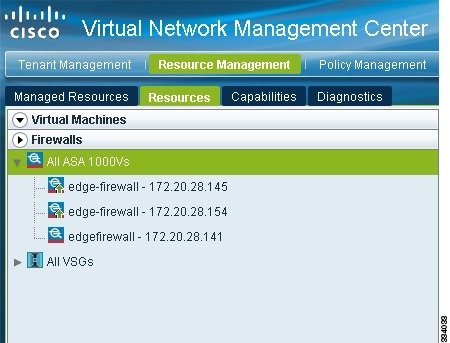 The logical edge firewall object is created at a specific organization level of the five-level hierarchy. 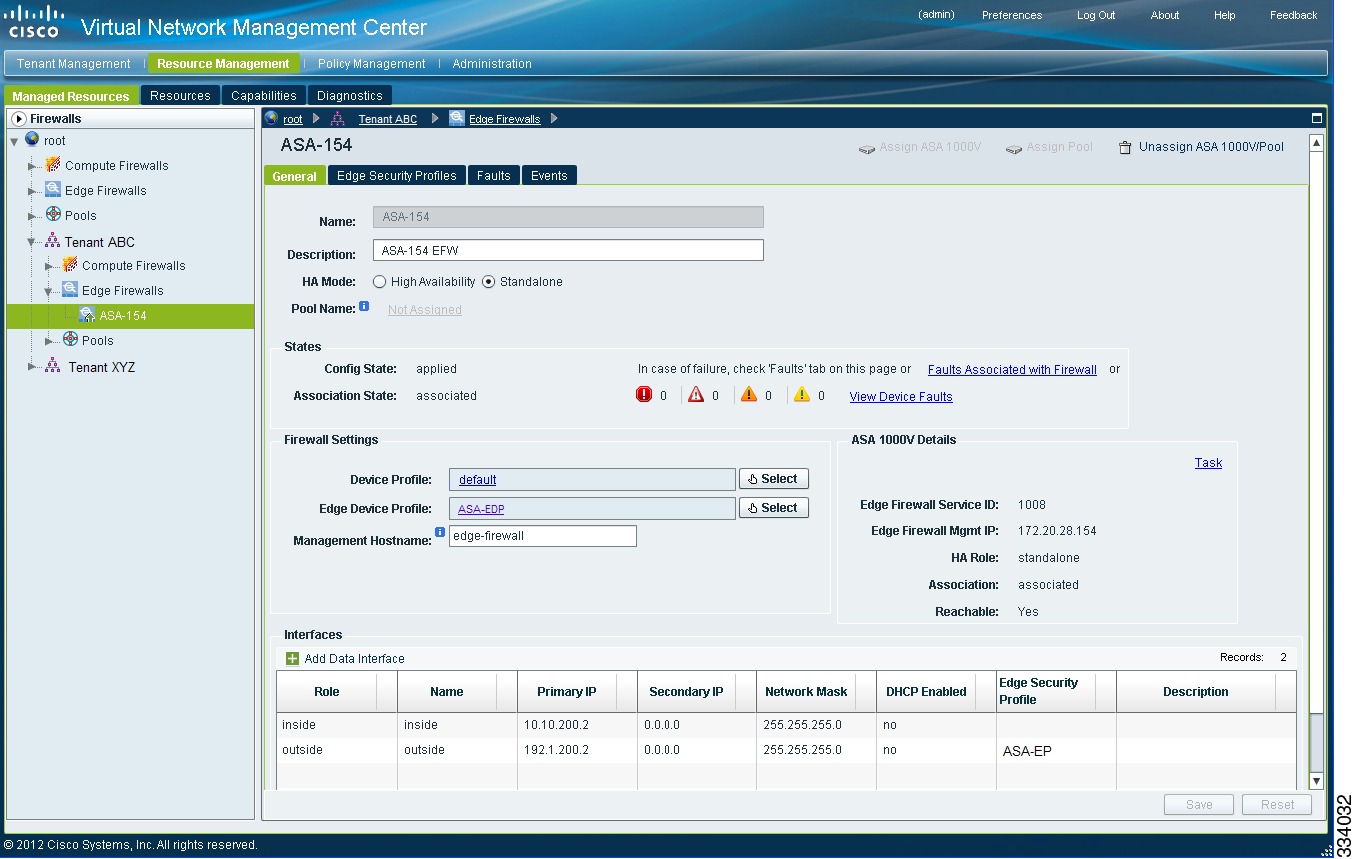 There are three types of top-level policy objects for the ASA 1000V. These objects can contain other policies and objects.

Edge Device Profiles—(Global to the ASA 1000V only). Multiple ASA1000V instances can use the same edge device profile. This profile type contains policies that are unique to the ASA 1000V only; for example, the DHCP server, routing policies that are not applicable to Cisco VSG, or other devices. This profile is created in the Service Profiles pane.

How Policies Are Applied to the ASA 1000V 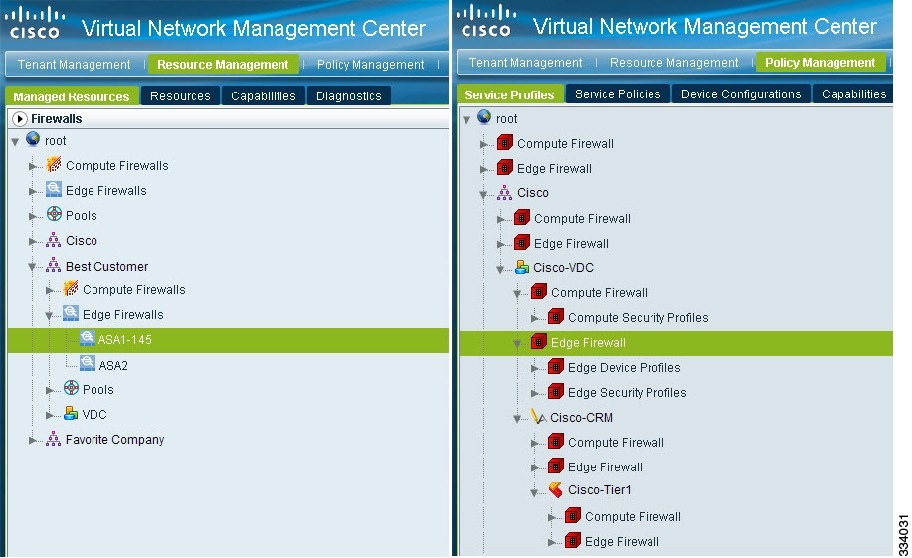 Policies can be organized at various levels for efficient management and sharing. Associating an edge firewall at a data center level allows a single edge firewall to protect VMs that belong to different types of applications and tiers.

Configuration Model for the ASA 1000V

The outside, management, and failover interfaces on the ASA 1000V function the same way that they do for other ASA releases.

Before deploying the ASA 1000V, you must perform the following tasks in this order:

Install an x86 Intel server with 64-bit processor, listed in the VMware Hardware Compatibility List that runs VMware vSphere Hypervisor software 4.1 or 5.0 with a minimum of two processors of at least 1.5 GHz each, 8 GB of physical RAM, 30 GB of disk space, with an Enterprise Plus license.

Install VMware vCenter 4.1 or 5.0 to manage the VMware vSphere Hypervisor server, with an Enterprise Plus license.

Install the VMware vSphere Client and connect it to the appropriate VMware vCenter for your Cisco Nexus 1000V deployment.

The following link provides an overview of Nexus 1000V architecture:

Use the Nexus 1000V Installation Management Center to install Nexus 1000V on your server(s). The following links describe the steps:

The ASA 1000V requires the following four port profiles because it has four interfaces:

A port profile for management interface

A port profile for the failover interface if failover is used

Each port profile must be on a different Layer 2 network.

Register the VSM with the Cisco VNMC by downloading the Nexus 1000V Policy Agent image from the Cisco software download site and completing the steps in the "Registering a Cisco Nexus 1000V VSM "section of the following guide:

Deploying the components required to support the ASA 1000V (VNMC,VSM,VSG) does not support localization (installing the components in non-English mode). Consequently, the VMware vCenter and the LDAP servers in your environment must be installed in an ASCII-compatible mode.

You must set your keyboard to United States English before installing the ASA 1000V and using the VM console.

For more information about the individual components that comprise the ASA 1000V, see the following documentation:

Subscribe to the What's New in Cisco Product Documentation as a Really Simple Syndication (RSS) feed and set content to be delivered directly to your desktop using a reader application. The RSS feeds are a free service and Cisco currently supports RSS Version 2.0.

For information about the ASA 1000V features, see the following ASA 1000V documentation at: