The following are restrictions for implementing VRRP:

To implement VRRP on Cisco IOS XR software , you need to understand the following concepts:

A LAN client can use a dynamic process or static configuration to determine which router should be the first hop to a particular remote destination. The client examples of dynamic router discovery are as follows:

For example, Figure 1 shows a LAN topology in which VRRP is configured. In this example, Routers A, B, and C are VRRP routers (routers running VRRP) that compose a virtual router. The IP address of the virtual router is the same as that configured for the interface of Router A (10.0.0.1). 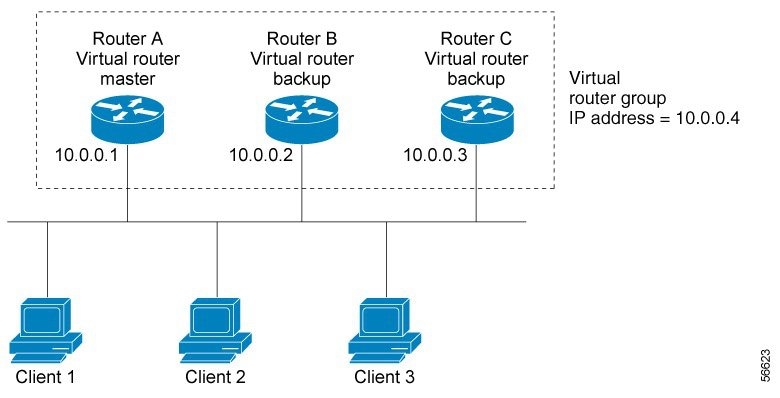 An important aspect of the VRRP redundancy scheme is VRRP router priority. Priority determines the role that each VRRP router plays and what happens if the master virtual router fails.

The benefits of VRRP are as follows:

How to Implement VRRP on Cisco IOS XR Software

This section contains instructions for the following tasks:

Customizing the behavior of VRRP is optional. Be aware that as soon as you enable a VRRP group, that group is operating. It is possible that if you first enable a VRRP group before customizing VRRP, the router could take over control of the group and become the master virtual router before you have finished customizing the feature. Therefore, if you plan to customize VRRP, it is a good idea to do so before enabling VRRP.

The sections that follow describe how to customize your VRRP configuration.

Use the address command to enable VRRP on an interface, as described in the sections that follow.

Use the show vrrp command to display a brief or detailed status of one or all VRRP virtual routers.

Use the clear vrrp statistics command to clear all the software counters for the specified virtual router.

Perform this task to disable the installation of routes for the VRRP virtual addresses.

Perform this task to configure the global virtual IPv6 address for a virtual router.

Perform this task to configure the primary virtual IPv4 address for a virtual router.

Perform this task to configure the secondary virtual IPv4 address for a virtual router.

The IPv6 address space is structured differently compared to IPv4. Link-local addresses are used to identify each interface on the local network. These addresses may either be configured or determined automatically in a standard way using the link-layer (hardware) address of the interface (MAC address for Ethernet interfaces). Link-local addresses have a standard format and are valid only on the local network (they cannot be routed to, from multiple hops away).

Global unicast IPv6 addresses occupy a disjoint subset of the IPv6 address space from link-local addresses. They can be routed to, from multiple hops away and have an associated prefix length (between 0 and 128 bits).

Perform this task to disable the task of logging the VRRP state change events via syslog.

Multiple Group Optimization for Virtual Router Redundancy Protocol (VRRP) provides a solution for reducing control traffic in a deployment consisting of many subinterfaces. By running the VRRP control traffic for just one session, the control traffic is reduced for the subinterfaces with identical redundancy requirements. All other sessions are slaves of this primary session, and inherit their states from it.

Perform this task to configure a VRRP session name.

Perform this task to instruct the slave group to inherit its state from a specified group.
SUMMARY STEPS

Configuring a Primary Virtual IPv4 Address for a Slave Group(VRRP)

Perform this task to configure the primary virtual IPv4 address for the slave group.
SUMMARY STEPS

Configuring a Secondary Virtual IPv4 address for the Slave Group

Perform this task to configure the secondary virtual IPv4 address for the slave group.

VRRP enables one or more IP addresses to be assumed by a router when a failure occurs. For example, when IP traffic from a host reaches a failed router because the failed router is the default gateway, the traffic is transparently forwarded by the VRRP router that has assumed control. VRRP does not require configuration of dynamic routing or router discovery protocols on every end host. The VRRP router controlling the IP address(es) associated with a virtual router is called the master, and forwards packets sent to these IP addresses. The election process provides dynamic fail over(standby) in the forwarding responsibility should the master become unavailable. This allows any of the virtual router IP addresses on the LAN to be used as the default first hop router by end-hosts.The advantage gained from using VRRP is a higher availability default path without requiring configuration of dynamic routing or router discovery protocols on every end-host. SNMP traps provide information of the state changes, when the virtual routers(in standby) are moved to master state or if the standby router is made master.

In the event of failure of a VRRP process in one group, forced failovers in peer VRRP master router groups should be prevented. Hot restartability supports warm RP failover without incurring forced failovers to peer VRRP routers.

This section provides the following configuration example of Router A and Router B, each belonging to three VRRP groups:

In the configuration example, each group has the following properties: