Restrictions for MPLS-TP on the Cisco ASR 900 Series Routers

MPLS-TP is supported on ATM and TDM pseudowires on the Cisco ASR 903 router. For information, see Configuring the Pseudowire Class.

Link numbers must be unique on the router or node.

Tunnel LSPs, whether endpoint or midpoint, use the same identifying information. However, it is entered differently.

Network survivability is the ability of a network to recover traffic deliver following failure, or degradation, of network resources. The MPLS-TP Survivability Framework (RFC-6372) describes the framework for survivability in MPLS-TP networks, focusing on mechanisms for recovering MPLS-TP label switched paths (LSPs)

Linear protection provides rapid and simple protection switching because it can operate between any pair of points within a network. Protection switching is a fully allocated survivability mechanism, meaning that the route and resources of the protection path are reserved for a selected working path or set of working paths. For a point-to-point LSPs, the protected domain is defined as two label edge routers (LERs) and the transport paths that connect them.

Protection switching in a point-to-point domain can be applied to a 1+1, 1:1, or 1:n unidirectional or bidirectional protection architecture. When used for bidirectional switching, the protection architecture must also support a Protection State Coordination (PSC) protocol. This protocol is used to help coordinate both ends of the protected domain in selecting the proper traffic flow. For example, if either endpoint detects a failure on the working transport entity, the endpoint sends a PSC message to inform the peer endpoint of the state condition. The PSC protocol decides what local action, if any, should be taken. 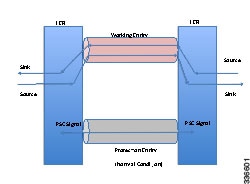 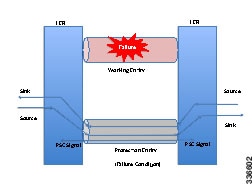 In 1:1 bidirectional protection switching, for each direction, the source endpoint sends traffic on either a working transport entity or a protected transport entity, referred to as a data-path. If the either endpoint detects a failure on the working transport entity, that endpoint switches to send and receive traffic from the protected transport entity. Each endpoint also sends a PSC message to inform the peer endpoint of the state condition. The PSC mechanism is necessary to coordinate the two transport entity endpoints and implement 1:1 bidirectional protection switching even for a unidirectional failure. The switching of the transport path from working path to protected path can happen because of various failure conditions (such as link down indication (LDI), remote defect indication (RDI), and link failures) or because administrator/operator intervention (such as shutdown, lockout of working/forced switch (FS), and lockout of protection).

Each endpoint LER implements a PSC architecture that consists of multiple functional blocks. They are:

The emLockout message is sent on the specified channel from the endpoint on the LSP where the lockout command (working/protected) is issued. Once the lockout is cleared locally, a Wait-To-Restore (WTR) timer (configurable) is started and the remote end notified. The local peer continues to remain in lockout until a clear is received from the remote peer and the WTR timer has expired and only then the LSP is considered to be no longer locked out. In certain deployments, you use a large WTR timer to emulate a non-revertive behavior. This causes the protected LSP to continue forwarding traffic even after the lockout has been removed from the working LSP.

The PSC protocol as specified in RFC-6378 is incompatible with the emulated APS implementation in certain conditions. For example, PSC implements a priority scheme whereby a lockout of protection (LoP) is at a higher priority than a forced switch (FS) issued on a working LSP. When an FS is issued and cleared, PSC states that the switching must revert to the working LSP immediately. However, the emulated APS implementation starts a WTR timer and switches after the timer has expired.

Mapping and Priority of emlockout

There are two possible setups for interoperability:

You can understand the mapping and priority when an emLockout is received and processed in the new-old implementation by referring to the following figure. 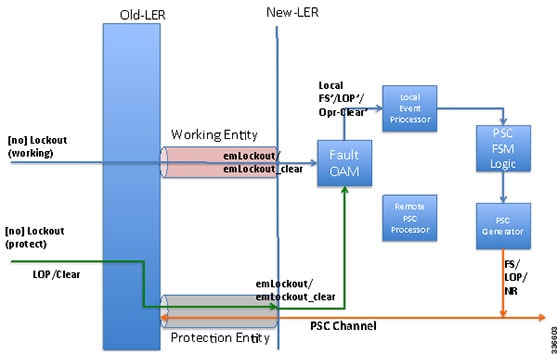 When the new label edge router (new-LER) receives an emLockout (or emLockout_clear) message, the new-LER maps the message into an internal local FS’/FSc’ (local FS-prime/FS-prime-clear) or LoP’/LoPc’ (local LoP-prime/Lop-prime-clear) event based on the channel on which it is received. This event is prioritized by the local event processor against any persistent local operator command. The highest priority event drives the PSC FSM logic and any associated path protection logic. A new internal state is defined for FS’/FSc’ events. The PSC FSM logic transmits the corresponding PSC message. This message is dropped/ignored by the old-LER.

In the new-new LER implementation shown in the following figure, each endpoint generates two messages when a lockout command is given on a working or protected LSP. 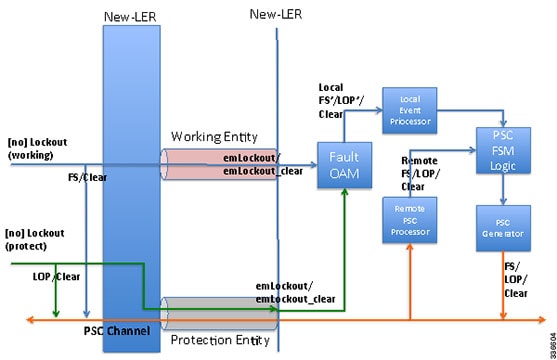 When a lockout (working) command is issued, the new-LER implementation sends an emLockout command on the working LSP and PSC(FS) on the protected LSP. The remote peer receives two commands in either order. A priority scheme for local events is modified slightly beyond what is defined in order to drive the PSC FSM to a consistent state despite the order in which the two messages are received.

Time T1: Lockout (on the working LSP) is issued on O and N. Data is switched from the working to the protected LSP.

When a lockout on the working label switched path (LSP) is issued and subsequently cleared, a WTR timer (default: 10 sec, configurable) is started. When the timer expires, the data path is switched from protected to working LSP.

The PSC protocol indicates that the switch should happen immediately when a lockout (FS) is cleared.

When a new node is connected to the old node, for a period of time equal to the WTR timer value, the data path may be out-of-sync when a lockout is cleared on the working LSP. You should configure a low WTR value in order to minimize this condition.

Another issue is synchronization of the WTR value during stateful switchover (SSO). Currently, the WTR residual value is not checkpointed between the active and standby. As a result, after SSO, the new active restarts the WTR with the configured value if the protected LSP is active and the working LSP is up. As part of the PSC protocol implementation, the residual WTR is checkpointed on the standby. When the standby becomes active, the WTR is started with the residual value.

The event priority scheme for locally generated events is as follows in high to low order:

The following are the new syslogs that are introduced as part of the Linear Protection with PSC Support feature:

How to Configure MPLS Transport Profile

You must specify a static range of Multiprotocol Label Switching (MPLS) labels using the mpls label range command with the static keyword.

The bfd-template command allows you to create a BFD template and enter BFD configuration mode. The template can be used to specify a set of BFD interval values. You invoke the template as part of the MPLS-TP tunnel. On platforms that support the BFD Hardware Offload feature and that can provide a 60-ms cutover for MPLS-TP tunnels, it is recommended to use the higher resolution timers in the BFD template.

When you create a pseudowire class, you specify the parameters of the pseudowire, such as the use of the control word, preferred path and OAM class template.

On the endpoint devices, create an MPLS TP tunnel and configure its parameters. See the interface tunnel-tp command for information on the parameters.

The psc command allows you to configure MPLS-TP linear protection with PSC support. PSC is disabled by default. However, it can be enabled by issuing the psc command.

Use the following commands to verify and help troubleshoot your MPLS-TP configuration:

The following example configures the fast refresh interval for PSC messages. The interval value is 2000 seconds.

The following example configures the slow refresh interval for PSC messages. The interval value is 10 seconds.

The following example configures the remote event expiration timer with a refresh interval value of 20 seconds with a message count of 15.

The following example enables the sending of emLockout on working/protected transport entities, enters working LSP mode on a TP tunnel interface, and issues a local manual switch condition on a working LSP.

The following example displays a summary of the MPLS-TP settings.

The following example enables debugging for all PSC packets that are sent and received.

The following example enables debugging for all kinds of PSC events.

The following example clears the counters for PSC signaling messages based on the tunnel number.

The following example clears the remote event for PSC based on the tunnel number.