Lawful intercept is the process by which law enforcement agencies conduct electronic surveillance of circuit and packet-mode communications, authorized by judicial or administrative order. Service providers worldwide are legally required to assist law enforcement agencies in conducting electronic surveillance in both circuit-switched and packet-mode networks.

Lawful Intercept is not a part of the Cisco IOS XR software by default. You have to install it separately by installing and activating hfr-li.px.pie .

Lawful intercept implementation also requires that these prerequisites are met:

The following restrictions are applicable for Lawful Intercept:

Cisco lawful intercept is based on service-independent intercept (SII) architecture and SNMPv3 provisioning architecture. SNMPv3 addresses the requirements to authenticate data origin and ensure that the connection from the router to the MD is secure. This ensures that unauthorized parties cannot forge an intercept target.

Lawful Intercept provisioning for VoIP occurs in these ways:

VoIP calls are intercepted in this manner:

Data are intercepted in this manner:

Information About the MD

The MD performs these tasks:

This figure shows intercept access points and interfaces in a lawful intercept topology for both voice and data interception.

Figure 1. Lawful Intercept Topology for Both Voice and Data Interception 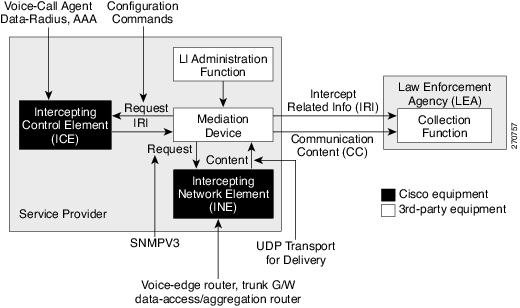 This section provides details for intercepting IPv4 and IPv6 packets supported on the Cisco CRS Router.

The filters used for classifying a tap are:

Intercepting Packets Based on Flow ID (Applies to IPv6 only)

To further extend filteration criteria for IPv6 packets, an additional support to intercept IPv6 packets based on flow ID has been introduced on the Cisco CRS Router. All IPv6 packets are intercepted based on the fields in the IPv6 header which comprises numerous fields defined in IPv6 Header Field Details table:

The flow ID or flow label is a 20 bit field in the IPv6 packet header that is used to discriminate traffic flows. Each flow has a unique flow ID. The filteration criteria to intercept packets matching a particular flow ID is defined in the tap configuration file. From the line card, the intercepted mapped flow IDs are sent to the next hop, specified in the MD configuration file. The intercepted packets are replicated and sent to the MD fom the line card. The ideal replication rate on MSC-40 is 100 Mbps depending on packet size and features configured on the router.

This section provides information about intercepting VRF aware packets and 6PE packets. Before describing how it works, a basic understanding of 6VPE networks is discussed.

Cisco CRS Router supports intercepting IPv6 packets of the specified VRF ID for 6VPE. To distiguish traffic on VPN, VRFs are defined containing a specific VRF ID. The filter criteria to tap a particular VRF ID is specified in the tap. IPv6 packets are intercepted with the VRF context on both scenarios: imposition (ip2mpls) and disposition (mpls2ip).

The intercepted packet gets a new UDP header and IPv4 header. Information for IPv4 header is derived from MD configuration. Apart from the IP and UDP headers, a 4 byte channel identifier (CCCID) is also inserted after the UDP header in the packet. After adding the MD encapsulation, if the packet size is above the MTU, the egress LC CPU fragments the packet. Moreover, there is a possibility that the packet tapped is already a fragment. Each tap is associated with only one MD. Cisco CRS Router does not support forwarding replicated packets to multiple MDs.

Cisco CRS Router line cards provide SNMP server as an interface to export each tap forwarded to MD packet and drop counts. Any intercepted packets that are dropped prior to getting forwarded to the MD due to policer action are counted and reported. The drops due to policer action are the only drops that are counted under per tap drop counters. If a lawful intercept filter is modified, the packet counts are reset to 0.

High availability for lawful intercept provides operational continuity of the TAP flows and provisioned MD tables to reduce loss of information due to route processor fail over (RPFO).

To achieve continuous interception of a stream, when RP fail over is detected; MDs are required to re-provision all the rows relating to CISCO-TAP2-MIB, CISCO-IP-TAP-MIB, and CISCO-USER-CONNECTION-TAP-MIB to synchronize database view across RP and MD.

Preserving TAP and MD Tables during RP Fail Over

At any point in time, MD has the responsibility to detect the loss of the taps via SNMP configuration process.

After RPFO is completed, MD should re-provision all the entries in the stream tables, MD tables, and IP taps with the same values they had before fail over. As long as an entry is re-provisioned in time, existing taps will continue to flow without any loss.

The following restrictions are listed for re-provisioning MD and tap tables with respect to behavior of SNMP operation on citapStreamEntry, cTap2StreamEntry, cTap2MediationEntry MIB objects:

The replay timer is an internal timeout that provides enough time for MD to re-provision tap entries while maintaining existing tap flows. It resets and starts on the active RP when RPFO takes place. The replay timer is a factor of number of LI entries in router with a minimum value of 10 minutes.

After replay timeout, interception stops on taps that are not re-provisioned.

As LI is not a part of the Cisco IOS XR image by default, you need to install it separately.

Installing and Activating the LI Package

The Package Installation Envelope (PIE) files, are installable software files with the .pie extension. PIE files are used to copy one or more software components onto the router. A PIE may contain a single component, a group of components (called a package), or a set of packages (called a composite package).

Use the show install committed command in EXEC mode to verify the committed software packages.

To install the Lawful Intercept (LI) package, you must install and activate the hfr-li-px.pie

To uninstall the Lawful Intercept package, deactivate hfr-li-px.pie as shown in the following steps:

Upgrade and Downgrade Scenarios for the Lawful Intercept package

This section describes the possible upgrade and downgrade scenarios with respect to the Lawful Intercept (LI) package.

At any point during the upgrade or the downgrade process, you can check the progress by using the show install request or the show issu command.

Some of the conventions that are followed in describing these scenarios are:

Perform these procedures in the order presented to configure SNMPv3 for the purpose of Lawful Intercept enablement:

Lawful Intercept is enabled by default on the after installing and activating the .

If MPP was not earlier configured to work with another protocol, then ensure that the MPP feature is also not configured to enable the SNMP server to communicate with the mediation device for lawful interception. In such cases, MPP must be configured specifically as an inband interface to allow SNMP commands to be accepted by the router, using a specified interface or all interfaces.

For lawful intercept, a loopback interface is often the choice for SNMP messages. If you choose this interface type, you must include it in your inband management configuration.

For a more detailed discussion of the inband management interface, see the Inband Management Interface.

Enabling the Mediation Device to Intercept VoIP and Data Sessions

This example illustrates how to enable the MPP feature, which is disabled by default, for the purpose of lawful intercept.

You must specifically enable management activities, either globally or on a per-inband-port basis, using this procedure. To globally enable inbound MPP, use the keyword all with the interface command, rather than use a particular interface type and instance ID with it.