Segment routing is a method of forwarding packets on the network based on the source routing paradigm. The forward path is determined before the packet is even sent. The path is encoded in the packet, at the source as a list of segments bearing forwarding instructions. At each hop the top segment, which references the router information base (RIB), is used to identify the next hop. Segments are stacked in order, at the top of the packet header. When the top segment contains the identity of another node, the receiving node uses ECMP to move the packet to the next hop. When the identity is that of the receiving node, the node pops the top segment and performs the task required by the next segment.

How Does Segment Routing Work?

A router in a Segment Routing network is capable of selecting any path to forward traffic, whether it is explicit or Interior Gateway Protocol (IGP) shortest path. Segments represent subpaths that a router can combine to form a complete route to a network destination. Each segment has an identifier (Segment Identifier) that is distributed throughout the network using new IGP extensions. The extensions are equally applicable to IPv4 and IPv6 control planes. Unlike the case for traditional MPLS networks, routers in a Segment Router network do not require Label Distribution Protocol (LDP) and Resource Reservation Protocol - Traffic Engineering (RSVP-TE) to allocate or signal their segment identifiers and program their forwarding information.

The following figure illustrates an MPLS network with five routers using Segment Routing, IS-IS, a label range of 100 to 199 for node IDs, and 200 and higher for adjacency IDs. IS-IS would distribute IP prefix reachability alongside segment ID (the MPLS label) across the network. 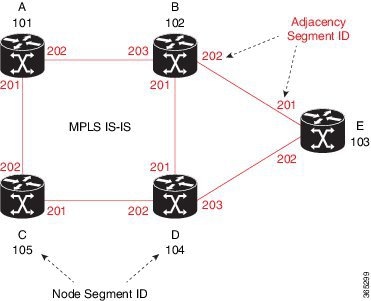 In the previous example, any router sending traffic to router E would push label 103 (router E node segment identifier) to forward traffic using the IS-IS shortest path. The MPLS label-swapping operation at each hop preserves label 103 until the packet arrives at E (Figure 2). On the other hand, adjacency segments behave differently. For example, if a packet arrives at Router D with a top-of-stack MPLS label of 203 (D-to-E adjacency segment identifier), Router D would pop the label and forward the traffic to Router E. 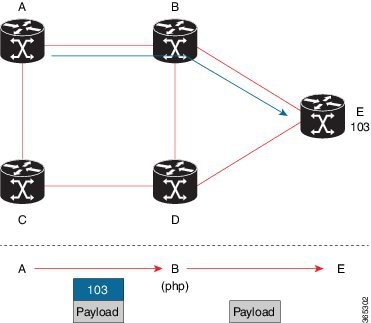 Segment identifiers can be combined as an ordered list to perform traffic engineering. A segment list can contain several adjacency segments, several node segments, or a combination of both depending on the forwarding requirements. In the previous example, Router A could alternatively push label stack (104, 203) to reach Router E using the shortest path and all applicable ECMPs to Router D and then through an explicit interface onto the destination (Figure 3). Router A does not need to signal the new path, and the state information remains constant in the network. Router A ultimately enforces a forwarding policy that determines which flows destined to router E are switched through a particular path. 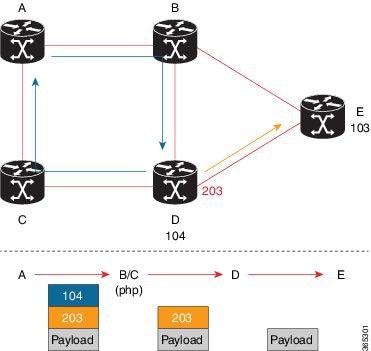 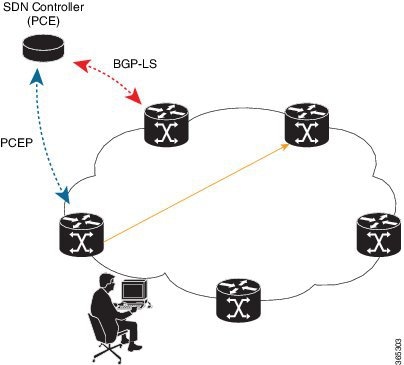 When applied to the MPLS data plane, Segment Routing offers the ability to tunnel MPLS services (VPN, VPLS, and VPWS) from an ingress provider edge to an egress provider edge without any other protocol than an IGP (ISIS or OSPF).

Simpler operation without separate protocols for label distribution (for example, no LDP or RSVP).

No complex LDP or IGP synchronization to troubleshoot.

Any node within the topology allocates the same BGP segment for the same switch.

Avoid thousands of MPLS Traffic Engineering LSPs in the network.

Avoid thousands of tunnels to configure.

Segment Routing provides a simple solution for disjointness enforcement within a so-called “dual-plane” network, where the route to an edge destination from a given plane stays within the plane unless the plane is partitioned.

Controllers and orchestration platforms can interact with Segment Routing traffic engineering for centralized optimization, such as WAN optimization.

Network changes such as congestion can trigger an application to optimize (recompute) the placement of segment routing traffic engineering tunnels.

Segment Routing tunnels are dynamically programmed onto the network from an orchestrator using southbound protocols like PCE.

Agile network programming is possible since Segment Routing tunnels do not require signaling and per-flow state at midpoints and tail end routers. 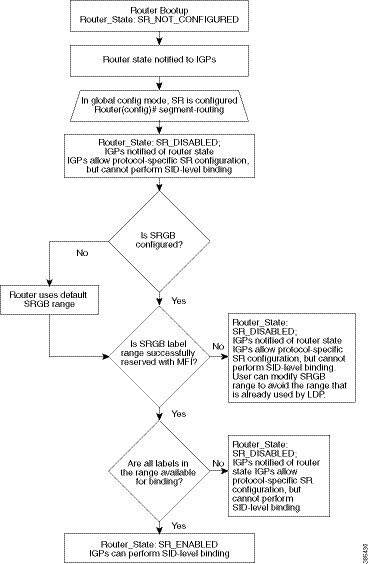 Specify the range of MPLS labels to be used to instantiate the segment routing SIDs into MPLS data plane.

This command enables MPLS on all interfaces and programs the MPLS labels for forwarding.

If the area keyword is specified, segment routing is enabled only on that area.

The disable keyword cab be used only if the area keyword is specified.

Global segment routing configuration may contain prefix-to-SID mapping entries for prefixes that are not local to the router. Each of these entries specifies a range of prefixes. Remote mapping entries can be used to find SIDs for prefixes connected to routers that do not support SR and hence not capable of advertising SIDs themselves. This capability is part of SR-LDP inter-working functionality. OSPF learns the ranges configured in the global SR configuration and advertises them in the Extended Prefix Range TLVs.

To permit an OSPF instance to advertise mapping entries configured in the global SR mode, use the following command in router mode.

By default, this command is disabled. That is, no mapping ranges are advertised by OSPF even if they are configures in the global SR mode.

This command does not affect processing of 'native' SIDs, that is, those SIDs that are advertised in the Extended Prefix TLVs by routers to whom the prefix is locally connected.