Configuring PPP over Ethernet with NAT

Multiple PCs can be connected to the LAN behind the router. Before the traffic from these PCs is sent to the PPPoE session, it can be encrypted, filtered, and so forth. Figure 3-1 shows a typical deployment scenario with a PPPoE client and NAT configured on the Cisco router.

Figure 3-1 PPP over Ethernet with NAT 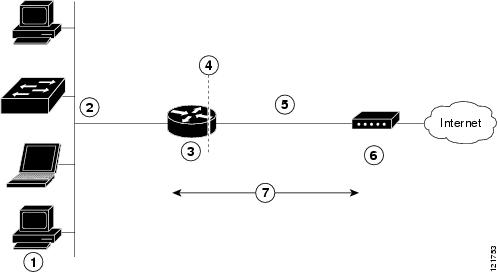 A PPPoE session is initiated on the client side by the Cisco 1800 series router. An established PPPoE client session can be terminated in one of two ways:

NAT (represented as the dashed line at the edge of the Cisco router) signifies two addressing domains and the inside source address. The source list defines how the packet travels through the network.

Perform the following tasks to configure this network scenario:

An example showing the results of these configuration tasks is shown in the section “Configuration Example.”

Configuring a virtual private dialup network (VPDN) enables multiple clients to communicate through the router by way of a single IP address.

Complete the following steps to configure a VPDN, starting from the global configuration mode. See the “Configure Global Parameters” section for details about entering this mode.

In this scenario, the PPPoE client (your Cisco router) communicates over a 10/100-Mbps Ethernet interface on both the inside and the outside.

Note The Cisco 1800 series integrated services fixed-configuration routers have a hardware limitation on the Fast Ethernet ports FE0 and FE1. In half-duplex mode, when traffic reaches or exceeds 100% capacity (equal to or greater than 5 Mbps in each direction), the interface experiences excessive collisions and resets every second. To avoid this problem, you must limit the traffic capacity to less than 100%.

Complete the following steps to configure a dialer interface for one of the Fast Ethernet LAN interfaces on the router, starting in global configuration mode.

Creates a dialer list and associates a dial group with it. Packets are then forwarded through the specified interface dialer group.

For details about this command and additional parameters that can be set, see the Cisco IOS Dial Technologies Command Reference .

Sets the IP route for the default gateway for the dialer 0 interface.

For details about this command and additional parameters that can be set, see the Cisco IOS IP Command Reference, Volume 2; Routing Protocols .

Network Address Translation (NAT) translates packets from addresses that match a standard access list, using global addresses allocated by the dialer interface. Packets that enter the router through the inside interface, packets sourced from the router, or both are checked against the access list for possible address translation. You can configure NAT for either static or dynamic address translations.

Perform these steps to configure the outside Fast Ethernet WAN interface with dynamic NAT, beginning in global configuration mode:

Note Since the VLAN interface is on LAN, we have used a private IP address.

Note Commands marked by “(default)” are generated automatically when you run the show running-config command.

Use the show ip nat statistics command in privileged EXEC mode to verify NAT configuration. You should see verification output similar to the following example: