Installing the Fan-Tray Assembly in the Cisco ONS 15310-MA

Installing the Fan-Tray Assembly in the Cisco ONS 15310-MA

Installing the Fan-Tray Assembly in the
Cisco ONS 15310-MA


Installing the Fan-Tray Assembly in the
Cisco ONS 15310-MA

This document contains the following sections:

The new fan-tray assembly (FTA2) has a fuse-control circuitry that is capable of blowing a low-current fuse (1/4-A to 1/2-A). This is useful when you are using power distribution equipment that has a low current fuse connected in parallel with the main fuse to help detect any failures in the main fuse. The fuse-control circuitry independently draws a short current (approximately 900 mA) for about 0.7 seconds every 15 minutes (at 24 degrees Celsius or 75.2 degrees Fahrenheit), alternating between power supply inputs A and B. This allows the ONS 15310-MA to blow the low current fuse when there is a failure or loss of the main fuse and report an alarm (FAN alarm).

The front of the fan-tray assembly has CR, MJ, and MN alarm LEDs that indicate that there are Critical, Major, and Minor alarm present on the ONS 15310-MA assembly.

Figure 1 shows the location of the fan tray. 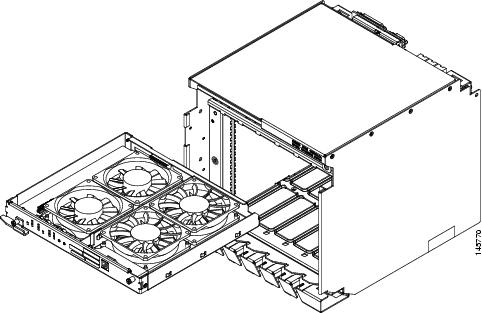 Fan speed is controlled by CTX2500 card temperature sensors. The sensors measure the input air temperature at the fan-tray assembly.

If one or more fans fail on the fan-tray assembly, replace the entire assembly. You cannot replace individual fans. The red Fan Fail LED on the front of the fan tray illuminates when one or more fans fail. For fan tray replacement instructions, refer to the Cisco ONS 15310-CL and Cisco ONS 15310-MA Troubleshooting Guide. The red Fan Fail LED turns off after you install a working fan tray.

The red Fan Fail LED on the front of the fan tray illuminates when only one power source is connected to the chassis, or any fuse blows.

The ONS 15310-MA uses a reusable air filter; Model 15310-MA-FTF, that is installed above the fan-tray assembly. The reusable filter is made of a gray, open-cell, polyurethane foam that is specially coated to provide fire and fungi resistance. Spare filters should be kept in stock.

Do not operate an ONS 15310-MA without the mandatory fan-tray air filter.

The following parts are needed to install the fan-tray assembly.

Install the air filter. The air filter is installed internally in the slot at the top left of the shelf assembly (Figure 2). Pull the tab, located at the center of the front of the fan filter, toward you. Make sure the tab is facing up before you install the fan filter.

Slide the air filter into the bracket, and push the tab closed. 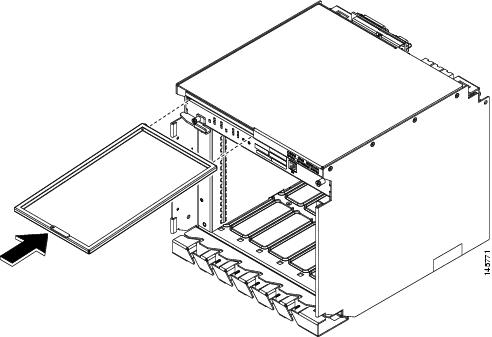 Pull the fan tray ejector all the way out.

Use the ejector to slide the fan tray into the shelf assembly until the electrical plug at the rear of the tray plugs into the corresponding receptacle on the backplane (Figure 1).

Use a Phillips screwdriver to tighten the screws at either end of the fan-tray assembly.

To verify that the tray has plugged into the backplane, look at the fan tray and listen to determine that the fans are running.

This document is to be used in conjunction with the documents listed in the "Related Documentation" section.

Printed in the USA on recycled paper containing 10% postconsumer waste.