This chapter describes the operation of the Cisco ONS 15600 SDH ASAP Ethernet card.

Any Service Any Port Card Application

10.1  Any Service Any Port Card Application

The Any Service Any Port (ASAP) Carrier Card plugs into any of the eight available I/O slots for the ONS 15600 SDH. Each ASAP carrier card has four slots available for up to and including four ASAP Pluggable Input/output Modules (PIMs). There are four slots available on the PIM for Pluggable Port Modules (PPM), which are Small Form-factor Pluggable (SFP) optics. Four PPMs per ASAP PIM are allowed, which means that there can be as many as 16 PPM optical network interfaces for each ASAP carrier card. Each PPM can support any of the following single-rate SFP optics:

Each of the PPM ports also supports the following multirate SFP optics:

Each ASAP 4-port I/O (4PIO) and 1-port I/O (1PIO) PIM is hot-pluggable while other ports on other PIMs are functioning. Each SFP is also hot-pluggable.

The data path processing consists of:

For a single flow of Gigabit Ethernet, traffic can be mapped to an VC4-16c. This choice limits maximum usable Ethernet ports to eight when all are mapped to VC4-16c. Any time an VC4-16c is used for an Ethernet connection, one-eighth of the total card bandwidth is consumed on the EoS mapper.

Ethernet facilities on the ASAP card include:

Ethernet ports can be provisioned on a multirate PPM.

Encapsulation methods allowed for the Ethernet ports are:

Provisioning of an Ethernet port automatically provisions a POS port for the connection and circuit.

Figure 10-1 shows the transport of Ethernet frames into an SDH path using the ASAP carrier card in the ONS 15600 SDH. Valid received Ethernet frames are encapsulated and transported across the SDH network. There are no modifications made to any bits in the frame that is delivered at the destination Ethernet port. Because invalid frames are dropped, this transport is not transparent.

Figure 10-2 shows Ethernet framing with HDLC/GFP header/trailers and mapping into a synchronous payload envelope (SPE) for transport over an SDH network. 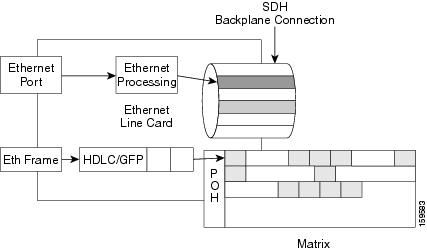 A valid frame is defined as one with the following attributes:

The Ethernet ports can be provisioned for encapsulation in frame-mapped GFP (GFP-F) as per ITU G.7041, Cisco HDLC/LEX as per RFC 1841, or Ethernet over Link Access Protocol over SDH (LAPS) as per ITU X.86. LEX with CRC-32 is the default encapsulation, as it is supported by most Cisco data cards.

The value of the C2 byte in a high-order SDH path is set to the following values for each encapsulation type:

For full line-rate mapping to ensure the VC4-8c rate, the effects of bandwidth expansion due to HDLC/GFP/ITU X.86 encapsulations need to be taken into account to ensure no packet loss.

Oversubscription of data interfaces is the mapping of an interface to a path with a lower bandwidth than the rate of the interface. When oversubscribing, the operator is relying on the fact that on data interfaces, packet transmission rates and utilization is not always 100 percent. For example, a customer with a GE interface might transmit at an average rate of only 100 Mbps.

To ensure that packet loss does not occur or that any ensuing packet loss is minimized, system engineers need to carefully estimate the amount of memory in the NE that is required to sustain any traffic bursts. Traffic bursts are characterized by several different models that take into account such parameters as the mean rate, peak rates, length of burst, and so on. Performing these calculations is more important in switching applications than in transport applications.

In the ONS 15600 SDH, oversubscription of interfaces is supported. This occurs when the GE interface is mapped to any of the VC3, VC4, VC4-2c, VC4-3c, and VC4-4c (c) rates. No guarantees on frame loss or delay due to oversubscription is provided by the system. Actual loss and delay values depend on incoming Ethernet traffic patterns.

The ASAP card supports the BCP, PPP Half Bridge, and VLAN protocols, described in the following subsections.

Support of BCP is relevant between two routers or bridges. An Ethernet card providing transport functionality is neither a router nor a bridge. Therefore, even BCP encapsulation is not supported on the Ethernet ports of the ASAP transport line card.

The ASAP line card Ethernet function is transparent to any Layer 2 and above protocol packets (the entire control plane). Any BCP control packets are transported out to the SDH interface.

The ASAP line card is transparent to any Layer 2 and above protocol packets (the entire control plane). Any PPP Half Bridge control packets are transported out to the SDH interface.

The ASAP line card is transparent to VLAN tag information in the Ethernet frame.

VLANs are tunneled, and not terminated.

Flow control capability of the peer as determined by AutoNegotiation

When an Ethernet interface is set to be capable of generating PAUSE frames, it starts generating them at a rate of X PAUSE frames per second when the ingress buffer passes above a certain level called the High Water Mark. A PAUSE_TIME is specified in each PAUSE frame. The values of the PAUSE_TIME parameter and the rate X parameter are determined by the system and are not user settable.

The Low Water Mark is always lower than the High Water Mark.

The Ethernet interfaces on the ASAP card are capable of autonegotiating for full duplex (only) operation as per IEEE 802.3z. The default provisioning is to autonegotiate the duplex mode and persists in memory. Autonegotiation can be provisioned to be ON or OFF.

The end-to-end Ethernet link integrity feature can be used in combination with Gigabit EtherChannel (GEC) capability on attached devices. The combination provides an Ethernet traffic restoration scheme that has a faster response time than alternate techniques such as spanning tree rerouting, yet is more bandwidth efficient because spare bandwidth does not need to be reserved.

The ASAP card supports all forms of link aggregation technologies including GEC, which is a Cisco proprietary standard, and the IEEE 802.3ad standard. The end-to-end link integrity feature ASAP card allows a circuit to emulate an Ethernet link. This allows all flavors of Layer 2 and Layer 3 rerouting to work correctly with the ASAP card. Figure 10-5 illustrates GEC support.

Although the ASAP card does not actively run GEC, it supports the end-to-end GEC functionality of attached Ethernet devices. If two Ethernet devices running GEC connect through the ASAP card to an ONS network, the ONS SDH side network is transparent to the EtherChannel devices. The EtherChannel devices operate as if they are directly connected to each other. Any combination of parallel circuit sizes can be used to support GEC throughput.

GEC provides line-level active redundancy and protection (1:1) for attached Ethernet equipment. It can also bundle parallel data links together to provide more aggregated bandwidth. Spanning Tree Protocol (STP) operates as if the bundled links are one link and permits GEC to utilize these multiple parallel paths. Without GEC, STP permits only a single nonblocked path. GEC can also provide ASAP card-level protection or redundancy because it can support a group of ports on different cards (or different nodes) so that if one port or card has a failure, traffic is rerouted over the other port or card.