Configuring VLANs on the ML-Series Card

VLANs enable network managers to group users logically rather than by physical location. A VLAN is an emulation of a standard LAN that allows secure intragroup data transfer and communication to occur without the traditional restraints placed on the network. It can also be considered a broadcast domain that is set up within a switch. With VLANs, switches can support more than one subnet (or VLAN) on each switch and give routers and switches the opportunity to support multiple subnets on a single physical link. A group of devices that belong to the same VLAN, but are part of different LAN segments, are configured to communicate as if they were part of the same LAN segment.

ML-Series switching supports up to 254 VLAN subinterfaces per interface. A maximum of 255 logical VLANs can be bridged per card (limited by the number of bridge-groups). Each VLAN subinterface can be configured for any VLAN ID in the full 1 to 4095 range. Figure 8-1 shows a network topology in which two VLANs span two ONS 15310-CLs with ML-Series cards. 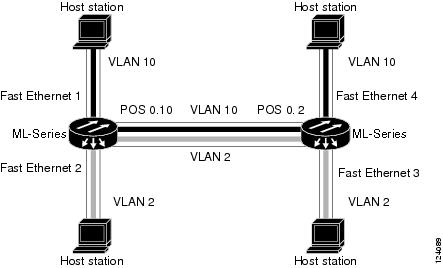 The VLAN configuration example for the ML-Series card shown in Figure 8-2 depicts the following VLANs:

Example 8-1 shows how to configure VLANs for IEEE 802.1Q VLAN encapsulation. Use this configuration for both ML_Series A and ML_Series B.

After the VLANs are configured on the ML-Series card, you can monitor their operation by entering the privileged EXEC command show vlans [vlan-id] (Example 8-2). This command displays information on all configured VLANs or on a specific VLAN (by VLAN ID number).