The ONS 15600 usually operates as a hub node in networks that include ONS 15454s, ONS 15327s, and ONS 15310-CLs. Single nodes are installed at geographic locations where several ONS SONET topologies converge. A single ONS 15600 node might be a part of several ONS SONET rings/networks.

To avoid errors during network configuration, Cisco recommends that you draw the complete ONS SONET network topology on paper (or electronically) before you begin the physical implementation. A sketch ensures that you have adequate slots, cards, and fibers to complete the topology.

You can configure ONS 15600s as a line of add/drop multiplexers (ADMs) by configuring one OC-N port as the working path and a second port as the protect path. Unlike rings, point-to-point (two node configurations) and linear (three node configurations) ADMs require that the OC-N ports at each node are in 1+1 protection to ensure that a break to the working path automatically routes traffic to the protect path.

The ONS 15600 can support 32 concurrent two-fiber bidirectional line switched rings (BLSRs). Each BLSR can support up to 24 ONS 15600s. Because the working and protect bandwidths must be equal, you can create only OC-48 or OC-192 BLSRs. For information about BLSR protection channels, see the "6.7  Protection Channel Access Circuits" section on page 6-14.

In two-fiber BLSRs, each fiber is divided into working and protect bandwidths. For example, in an OC-48 BLSR, STSs 1 to 24 carry the working traffic, and STSs 25 to 48 are reserved for protection (Figure 7-2). Working traffic (STSs 1 to 24) travels in one direction on one fiber and in the opposite direction on the second fiber. CTC circuit routing routines calculate the shortest path for circuits based on many factors, including user requirements, traffic patterns, and distance. For example, in Figure 7-2, circuits going from Node 0 to Node 1 will typically travel on Fiber 1, unless that fiber is full, in which case circuits will be routed to Fiber 2 through Node 3 and Node 2. Traffic from Node 0 to Node 2 (or Node 1 to Node 3) can be routed on either fiber, depending on circuit provisioning requirements and traffic loads. 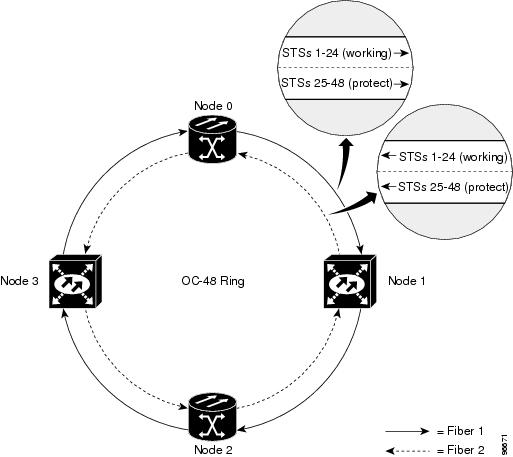 Figure 7-4 shows how traffic is rerouted following a line break between Node 0 and Node 3. 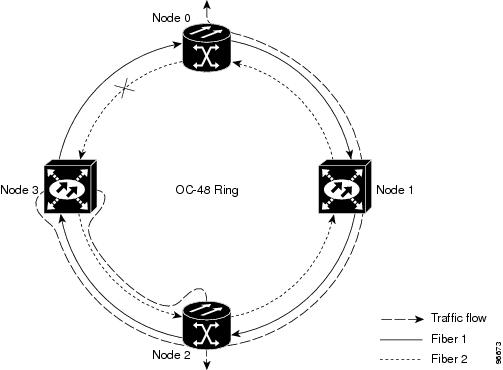 BLSRs allow bandwidth to be reused around the ring and can carry more traffic than a network with traffic flowing through one central hub. BLSRs can also carry more traffic than a path protection operating at the same OC-N rate. Table 7-1 shows the bidirectional bandwidth capacities of two-fiber BLSRs. The capacity is the OC-N rate divided by two, multiplied by the number of nodes in the ring minus the number of pass-through STS-1 circuits. 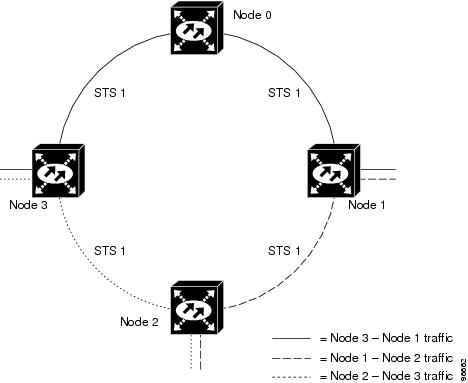 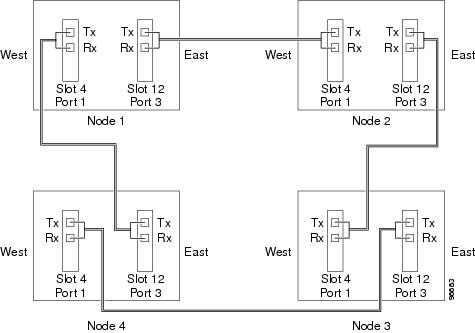 If a fiber break occurs, Node 2 switches its active receiver to the protect signal coming through Node 3 (Figure 7-8). 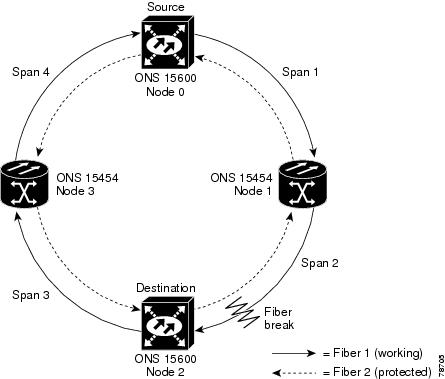 Because each traffic path is transported around the entire ring, path protection configurations are best suited for networks where traffic concentrates at one or two locations and is not widely distributed. path Protection capacity is equal to its bit rate. Services can originate and terminate on the same path protection, or they can be passed to an adjacent access or interoffice ring for transport to the service-terminating location.

The drop-and-continue DRI method is used for all ONS 15600 DRIs. In drop-and-continue DRI, a primary node drops the traffic to the connected ring and routes traffic to a secondary node within the same ring. The secondary node also routes the traffic to the connected ring; that is, the traffic is dropped at two different interconnection nodes to eliminate single points of failure. To route circuits on DRI, you must choose the Dual Ring Interconnect option during circuit provisioning. Dual transmit is not supported.

Two DRI topologies can be implemented on the ONS 15600:

A traditional DRI requires two pairs of nodes to interconnect two networks. Each pair of user-defined primary and a secondary nodes drop traffic over a pair of interconnection links to the other network.

For DRI topologies, a hold-off timer sets the amount of time before a selector switch occurs. It reduces the likelihood of multiple switches, such as:

Both a service selector and a path selector

Ring interworking on protection (RIP) circuits act as protection channel access circuits. RIP tables, which contain the primary and termination node IDs, can be accessed from secondary DRI nodes. In CTC, you set up RIP circuits by selecting the PCA option when setting up primary and secondary nodes during DRI circuit creation. 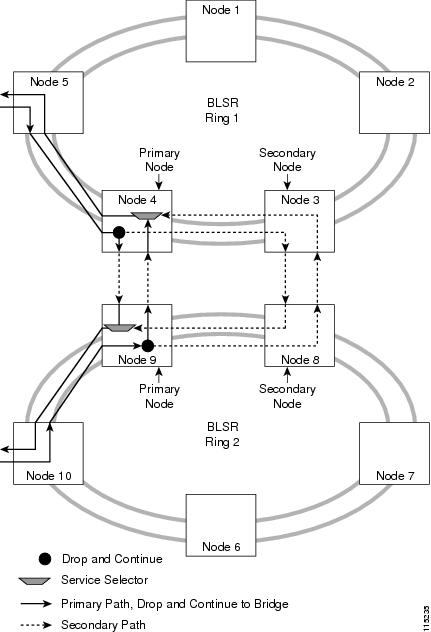 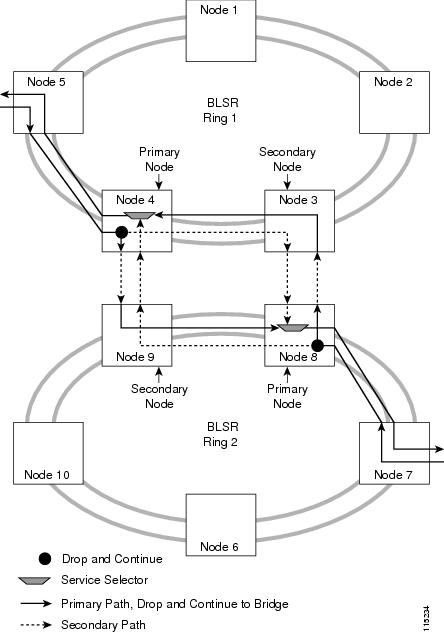 Figure 7-11 shows ONS 15600s in an integrated BLSR DRI topology. The same drop-and-continue traffic routing occurs at two nodes, rather than four. This is achieved by installing an additional OC-N trunk at the two interconnect nodes. Nodes 3 and 8 are the interconnect nodes. 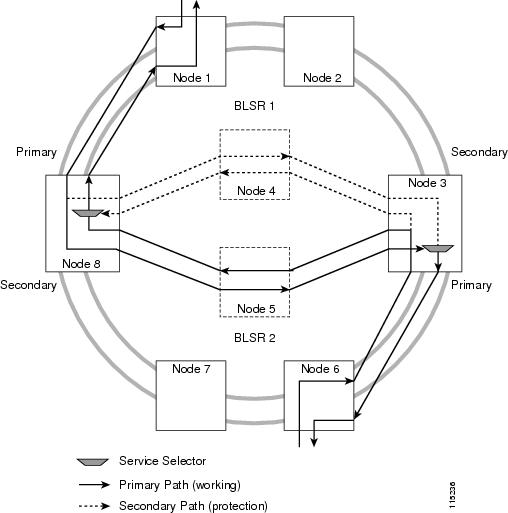 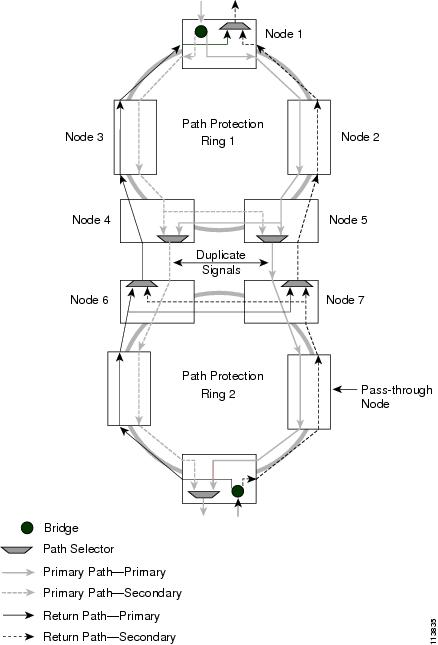 Figure 7-13 shows ONS 15600s in an integrated DRI topology. The same drop-and-continue traffic routing occurs at two nodes, rather than four. This is achieved by installing an addition OC-N trunk at the two interconnect nodes. 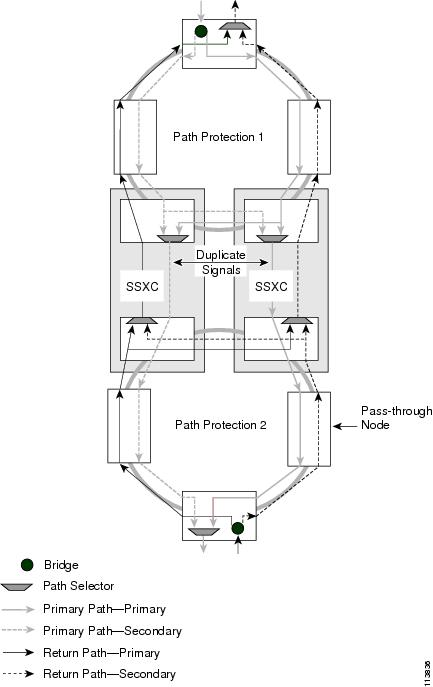 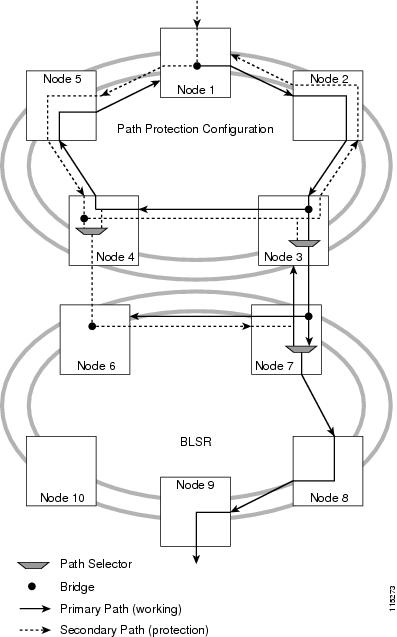 Figure 7-15 shows an example of a path protection to BLSR integrated DRI handoff. 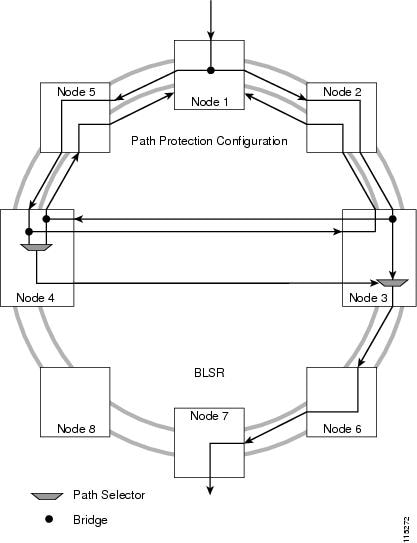 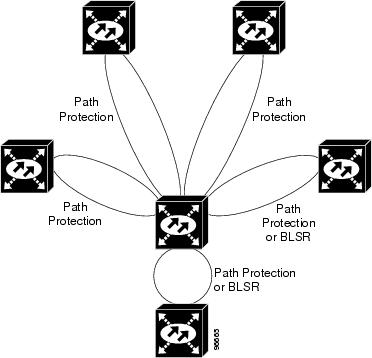 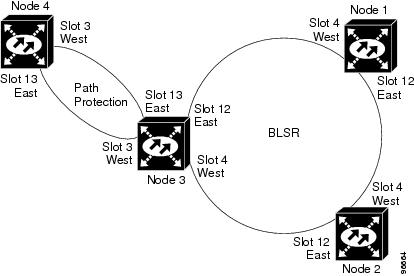 The ONS 15600 can support 32 BLSRs on the same node. This capability allows you to deploy an ONS 15600 in applications requiring SONET digital cross connect systems (DCSs) or multiple SONET ADMs.

Nodes in different BLSRs can have the same or different node IDs.

After subtending two BLSRs, you can route circuits from nodes in one ring to nodes in the second ring. For example, in Figure 7-18 you can route a circuit from Node 1 to Node 7. The circuit would normally travel from Node 1 to Node 4 to Node 7. If fiber breaks occur, for example between Nodes 1 and 4 and Nodes 4 and 7, traffic is rerouted around each ring: in this example, Nodes 2 and 3 in Ring 1 and Nodes 5 and 6 in Ring 2.

In addition to single BLSRs, path protection configurations, and ADMs, you can extend ONS 15600 traffic protection by creating path-protected mesh networks (PPMNs). PPMNs include multiple ONS 15600 SONET topologies and extend the protection provided by a single path protection to the meshed architecture of several interconnecting rings. In a PPMN, circuits travel diverse paths through a network of single or multiple meshed rings. When you create circuits, CTC automatically routes circuits across the PPMN, or you can manually route them. You can also choose levels of circuit protection. For example, if you choose full protection, CTC creates an alternate route for the circuit in addition to the main route. The second route follows a unique path through the network between the source and destination and sets up a second set of cross-connections.

For example, in Figure 7-19, a circuit is created from Node 3 to Node 9. CTC determines that the shortest route between the two nodes passes through Node 8 and Node 7, shown by the dotted line, and automatically creates cross-connections at Nodes 3, 8, 7, and 9 to provide the primary circuit path. 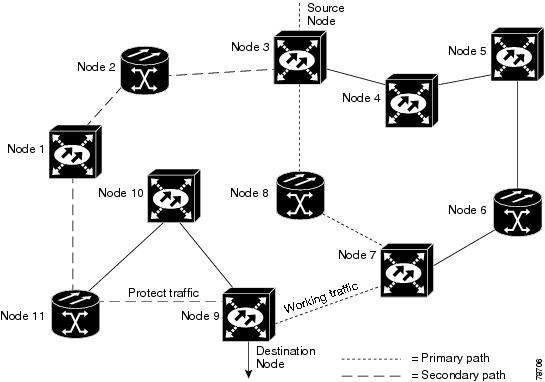 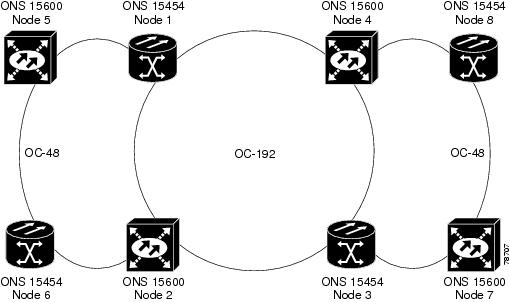 You cannot upgrade stitched Ethernet circuits during topology conversions. For in-service topology upgrade procedures, refer to the "Convert Network Configurations" chapter in the Cisco ONS 15600 Procedure Guide. For procedures to add or remove a node, refer to the "Add and Remove Nodes" chapter of the Cisco ONS 15600 Procedure Guide.

To convert from point-to-point or linear ADM to a path protection, the topology requires an additional circuit route to complete the ring. When the route is established, CTC creates circuit connections on any intermediate nodes and modifies existing circuit connections on the original circuit path. The number and position of network spans in the topology remains unchanged during and after the conversion.

Figure 7-21 shows an unprotected point-to-point ADM configuration converted to a path protection. An additional circuit routes through Node 3 to complete the path protection. 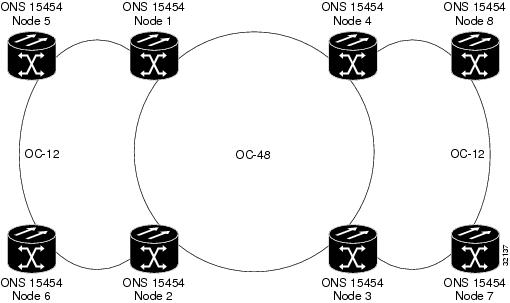 A 1+1 point-to-point or linear ADM to a two-fiber BLSR conversion is manual. You must remove the protect fibers from all nodes in the linear ADM and route them from the end node to the protect port on the other end node. In addition, you must delete the circuit paths that are located in the bandwidth that will become the protection portion of the two-fiber BLSR (for example, circuits in STS 25 or higher on an OC-48 BLSR) and recreate them in the appropriate bandwidth. Finally, you must provision the nodes as BLSR nodes.

To complete a conversion from an unprotected point-to-point or linear ADM to a two-fiber BLSR, use the CTC Convert Unprotected/path protection to BLSR wizard in the Tools > Topology Upgrade menu.

You can add or remove a node from a linear ADM, BLSR, or path protection configuration. Adding or removing nodes from BLSRs is potentially service affecting, however adding and removing nodes from an existing 1+1 linear ADM or path protection configuration does not disrupt traffic. CTC provides a wizard for adding a node to a point-to-point or 1+1 linear ADM. This wizard is used when adding a node between two other nodes.