This section describes the functionality and the features of the ONS 15305.

The ONS 15305 is a traffic concentrator that supports different types of transmission media. It can be used in networks based on fiber and copper media.

The ONS 15305 concentrates both IP and TDM traffic and is able to interface to both TDM and IP backbone networks. The TDM portion of the ONS 15305 is a cross-connect that can work as a terminal mux, add and drop mux, or non-blocking cross-connect.The IP portion consists of a L2 switch.

The ONS 15305 is a small device with a high port density that is designed to be flexible and highly scalable. It is targeted for a number of different applications as shown in this chapter.

The ONS 15305 can be used in star networks, ring networks, chained networks and meshed.

The following types of modules/boards exist:

Service modules, up to four 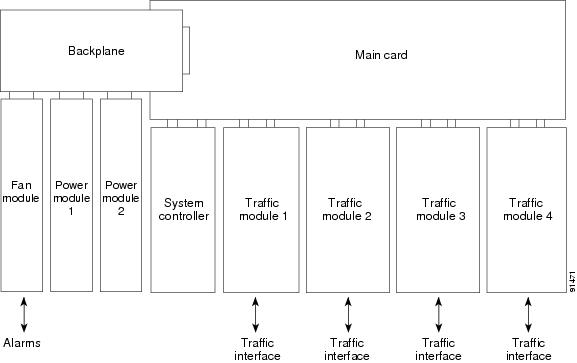 The ONS 15305 can be used as customer premise equipment (CPE). The unit has a large number of TDM interfaces (E1) and LAN interfaces (10/100/1000Base-T, 1000 Base-LX). This application is typically used for very large end customers or in a building with many smaller end customers.

The ONS 15305 can be connected towards the backbone network via fiber, radio, or copper. The application is shown in Figure 2-2. 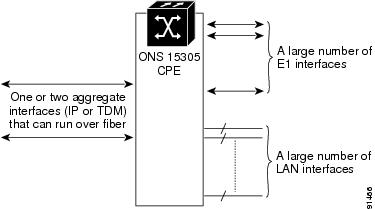 The ONS 15305 can also be used as a traffic concentrator in the point of presence (PoP) of the operator. The unit may support many different CPEs and may also support different types of transmission media. The unit is the interface between the core network and the access network. A typical application is shown in Figure 2-3.

In this application the ONS 15305 is used to connect up other Cisco products to the core SDH or IP network. It is also possible to connect equipment from other vendors to the ONS 15305.

If one ONS 15305 does not have enough performance or does not support enough interfaces, it is possible to stack a number of ONS 15305 nodes to create larger systems.

The ONS 15305 can also be connected back to back without any connection to external networks, as shown in Figure 2-5.

The ONS 15305 can be used as a standard ADM that supports TDM tributaries and IP tributaries, as shown in Figure 2-6. The fan unit is a plug-in device consisting of a circuit board with four fans. The air is sucked in via four circular openings in the left sidewall and emerges via holes in the right side cabinet wall. Four fans are used to improve reliability.

The fan unit consists of four fans. These act as the main and standby fans. The "main" and "stand-by" designations are swapped every 24 hours to evenly distribute wear on the fans.

In case of an abnormal temperature rise, all fans will operate simultaneously.

The fans operate in pairs; there are two standby fans and two main fans. The maximum temperature measured in the ONS 15305 controls the fans. The only modules not containing temperature sensing are the fan unit itself, the power modules, and the system controller card. The FAN module is connected to the main card through the backplane.

The O_TEMP_ALM alarm is detected on the main card when the temperature rises above 85 oC. The alarm, specific for each fan, is processed and presented as a Fan Failure Alarm.

The main feature of the power module is to convert and isolate primary power, 48 VDC, to 5,25 volts for the modules in the product.

The module has features that allow power sharing and hot plugging.

The module has separate alarms for two independent primary supplies (< 40 volts) and alarm for the secondary output (< 4,65 volts).

A 3m long power cable is also provided with a Mini-fit connector in one end and no connector in the other end. This cable connects the ONS 15305 to the internal 48V power-rails inside the rack.

The cable and the power supply meet the safety requirements of the EN 60950 specification.

The module generates +5.25 VDC; all other voltages necessary are generated on each module. If two power modules are used, the current sharing between the two modules is between 40% and 60%.

The system controller module contains the processor system for the ONS 15305, as shown in Figure 2-9.

The software is stored in Flash memory devices. The ONS 15305 uses a Compact Flash card as the storage medium. The 32 MB CompactFlash is mounted in a connector on the system controller. The size of the Compact Flash cards can be from 8MB to 128MB; this is determined by the application.

The module contains the local synchronization interface for the ONS 15305. This interface is directly connected to the SETS functionality on the motherboard.

The module contains the local user interface for the ONS 15305, the AUX port. The interface supports a framed E1 interface. It is possible to select different overhead bytes from all SDH interfaces to the 30 available time slots.

The physical connectors of the five interfaces are of the RJ-45 type.

Power consumption for the system controller module is 23 W maximum.

A local Ethernet port (10/100BaseT), called the Management Port, is available for connecting to a management DCN.The management signals go to an Ethernet Controller in the MPC8265 processor situated on the module.

The ONS 15305 offers a VT100 interface for connection of AXXCRAFT Terminal/CLI interface. The interface is running at a data rate of 19.200 baud.

The synchronization port is used for SETS functionality on the main card. The 2 Mbps AUX signals go to the SETS FPGA.

The voltages are generated on board with the exception of the +5.2 V that comes directly from the power modules. The power consumption should not exceed 23W.

The module is equipped with a reset circuit that resets the card in case of a fault in one of the voltages.

The reset switch that is accessible in front of the system controller module will reset the ONS 15305.

A special tool such as a small screwdriver or a pencil may be used to activate the switch.

Visual indicators (LEDS) are provided to indicate an ONS 15305 failure condition. These LEDs are placed on the System Controller Unit front cover and the front of the ONS 15305, as shown in Figure 2-10.

Figure 2-10 Locations of LEDs on the System Controller Front


The LEDs are controlled by the SETS FPGA and are not affected by the external alarms.

A fifth, green LED is also mounted in the front of the system controller card. This LED indicates the link status of the management port.

The modules terminating one or more STM-N lines are able to terminate both the DDC-R (192 Kbps) and DCC-M (576 Kbps) channels.

All modules with IP switching capability are interconnected with a high-speed link to a central switch on the main board. The link is called G-link.

The mapping of IP traffic into VC12 containers is performed at service module level. There is no connection between the IP and SDH traffic on the main card (in the base unit).