You can control these servers by using the Cisco Prime Network Registrar web-based user interface (web UI) or the command line interface (CLI). These user interfaces can also control server clusters that run on different platforms.

You can install Cisco Prime Network Registrar in either local or regional mode:

A regional cluster centrally manages local cluster servers and their address spaces. The regional administrator can perform the following operations:

Manage licenses for Cisco Prime Network Registrar. An installation must have at least one regional cluster for license management purposes.

Push and pull configuration data to and from the local DNS and DHCP servers. 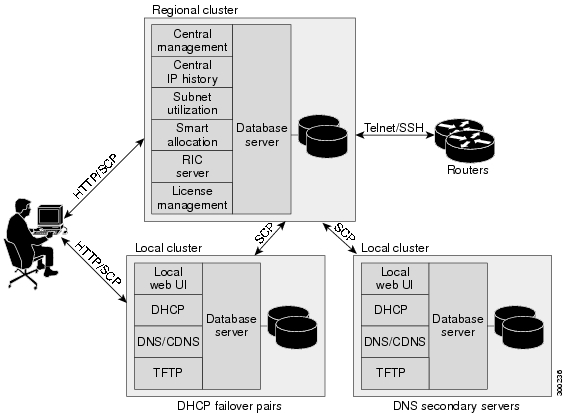 Java—You must have the Java Runtime Environment (JRE) 5.0 (1.5.0_06) or later, or the equivalent Java Development Kit (JDK) installed on your system. (The JRE is available from Oracle on its website.)

The web UI has been tested on Microsoft Internet Explorer 8 and Mozilla Firefox 5 and 6.

The CLI runs in a Windows, Solaris, or Linux command window.

For the CLI, the number of concurrent active user sessions and processes on a cluster can be no more than 14.

Previously, Cisco Network Registrar was licensed as a single system with a single license type called ip-node. For Cisco Prime Network Registrar 8.1, the licensing is done according to the services that you require. The following are the types of licences available:

base-system—Licenses the CCM services. This license is mandatory if you want to run Cisco Prime Network Registrar.

base-dhcp—Licenses DHCP/TFTP services and, optionally, an initial count of leases

count-dns—Licenses an incremental number of RRs

The different services provided by Cisco Prime Network Registrar are associated with the different license types as follows:

You should have at least one base license for a server to enable that service.

The utilization of licenses are calculated by obtaining statistics from all the local clusters in the Cisco Prime Network Registrar system for all counted services (DHCP, DNS, and CDNS). The regional CCM server maintains the license utilization history for a predetermined time period.

Utilization is calculated for different services as:

The services on each local cluster will be restricted based on the services for which licenses are present.

When you configure DHCP failover, we strongly recommend you to use simple failover (see Failover scenarios section in the Configuring DHCP Failover chapter of the Cisco Prime Network Registrar 8.1 User Guide). While the back office failover and symmetrical failover functionalities are still present, these will not be supported. Also, using these have licensing implications and will most likely require more licenses (or higher node count licenses) than would otherwise be indicated.

If you have automatic backup or virus scanning software enabled on your system, exclude the Cisco Prime Network Registrar directories and their subdirectories from being scanned. If they are not excluded, file locking issues can corrupt the databases or make them unavailable to the Cisco Prime Network Registrar processes. If you are installing on the default locations, exclude the following directories and their subdirectories:

In this documentation set, when install-path is used, it refers to all or part of the installation paths that were specified when installing Cisco Prime Network Registrar.
As an example using the Solaris and Linux default local cluster paths of /opt/nwreg2/local and /var/nwreg2/local, the install-path may represent these paths or just the /opt/nwreg2 or /var/nwreg2 portion.

If you decide to manually change ACLs, we recommend that you control the settings so that the contents of the entire installation area are read-only to everyone except those in the Administrators system group.

The following files and sub directories contain data that you may want only the Administrators system group to access:

Modifying the ACLs is strictly optional, and Cisco Prime Network Registrar will function normally without making any changes to them. See documentation supplied by Microsoft for information about how to use the cacls and icacls utilities.

System activity begins logging when you start Cisco Prime Network Registrar. The server maintains all the logs by default in the following directories:

To monitor the logs, use the tail -f command.

In Windows, to avoid losing the most recent system Application Event Log entries if the Event Log fills up, use the Event Viewer system application and check the Overwrite Events as Needed check box in Event Log Settings for the Application Log. If the installation process detects that this option is not set properly, it displays a warning message advising corrective action.

On Windows systems if you uninstall Cisco Prime Network Registrar and try to remove the associated data directories while having software installed that integrates with the Windows Performance Monitor, the software might take possession of certain shared libraries. This action prevents you from removing these files from the Cisco Prime Network Registrar folder and the directory itself. To keep this from happening:

Stop the service that is associated with the performance monitoring software.

On Windows systems, use one of the following methods to change the configuration from the Service Control Manager:

Change the Microsoft servers from a Startup Type of Automatic to Manual or Disabled.

If you want to disable a protocol server and prevent the Cisco Prime Network Registrar server from starting automatically after a system reboot, use the server {dns | cdns | dhcp | tftp} disable start-on-reboot command in the CLI.