The Java API currently consists of one major remote interface:

Figure 4-1 illustrates the interaction between a typical client application and the API layer. 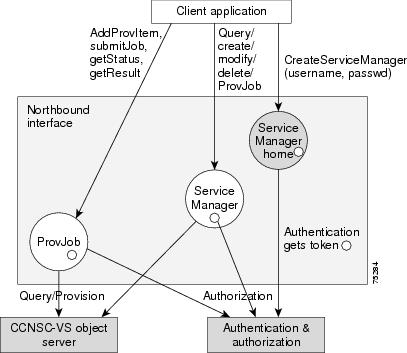 The ServiceManager Interface defines these methods:

queryContained()—provides bulk inventory retrieval function. It allows the client to bulk retrieve the entire subtree of objects contained under a specified scope. The supported object retrieval scope is zero. In addition to scoping, it also supports object retrieval based on the following filtering criteria:

the query returns an InventoryQueryResult object, which provides methods for the client to:

fetch the first batch of query results, returned as an XML string (encoded as "InventoryQueryResult" in an XML DTD)

Retrieve all objects in a region. The API returns the containing DGK Group and virtual zones, plus the entire subtree of objects contained under them.

Retrieve all objects in a virtual zone. The API returns the GK Group and virtual gateways that make up the virtual zone, plus the entire subtree of objects contained under them.

Retrieve all objects in a GK/DGK Group. The API returns the GKs/DGKs in the GK/DGK Group, plus all objects contained under each GK/DGK, including SNMP, NTP, RADIUS Group, Access List, and Interface.

The operation is synchronous and the results returned are encoded as XML strings (defined as "ConfigResult" in an XML DTD). The following provisioning services are supported: