This overview of AVC technology includes the following topics:

RTP performance metrics such as packet loss and jitter.

Performance metrics can be measured at multiple points within the router.

Metrics are aggregated and exported in NetFlow v9 or IPFIX format to a management and reporting package. Metrics records are sent out directly from the data plane when possible, to maximize system performance. When more complex processing is required, such as when the router is maintaining a history of exported records, records may be exported by the route processor, which is slower than direct export from the data plane.

Using the Cisco Prime Infrastructure management console, an administrator can configure each router in the network remotely using a GUI.

Figure 2-1 provides a high level overview the functions of the Cisco AVC solution.

The following Cisco AVC components are described in this section:

Figure 2-2 describes the components in the Cisco AVC architecture. 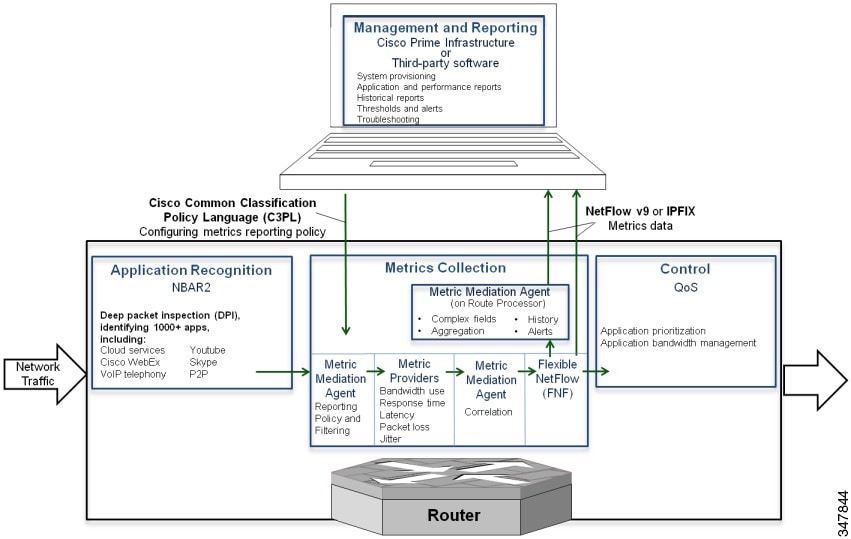 Categorizing applications into meaningful terms, such as category, sub-category, application group, and so on. This categorization simplifies report aggregation and control configuration.

Field extraction of data such as HTTP URL, SIP domain, mail server, and so on. The extracted application information can be used for classification or can be exported by IPFIX to the collector for creating reports.

Customized definition of applications, based on ports, payload values, or URL/Host of HTTP traffic.

The set of attributes for each protocol can be customized.

With NBAR2 Protocol Packs, new and updated application signatures can be loaded into a router without upgrading the software image. Major protocol packs providing new and updated signatures are released periodically. Minor protocol packs are released between major releases; they provide updates and bug fixes. For information about protocol pack support, see: http://www.cisco.com/en/US/docs/ios-xml/ios/qos_nbar/prot_lib/config_library/nbar-prot-pack-library.html

Supports history and alert functions. This requires sending the metrics records to the route processor (RP) before exporting them to the management and reporting tools.

Metric providers collect and calculate metrics and provide them to the Metric Mediation Agent (MMA) for correlation. There are a variety of metric providers: some collect simple, stateless metrics per packet, while other more complex metric providers track states and collect metrics per flow, transforming the metrics at the time of export and making sophisticated calculations. These transformations may require punting of records to the route processor (RP) before the metrics are exported to the management and reporting system.

Guaranteeing a minimum bandwidth for an individual application or for a group of applications within a QoS traffic class.

Similarly, QoS can also be used for "policing" or managing non-enterprise, recreational applications such as YouTube and Facebook.

The Cisco AVC solution integrates QoS functionality with NBAR2. QoS can use application information provided by NBAR2 in managing network traffic. The QoS class-map statements enable matching to NBAR2-supported applications and L7 application fields (such as HTTP URL or Host), as well as to NBAR2 attributes. Class-map statements can coexist with all other traditional QoS match attributes, such as IP, subnet, and DSCP.


Embedded Packet Capture (EPC) enables capturing the entire traffic for a given traffic class. The capture is limited only by available memory. The management and reporting system can read packets captured as a packet capture (pcap) file.

The Common Flow Table (CFT) manages L4 connections and enables storing and retrieving states for each flow. Using a common flow table optimizes use of system memory and improves performance by storing and running data for each flow only once. The CFT standardizes flow management across the entire system.

Cisco AVC operates with a variety of management and reporting systems.

3. In the Technologies list, select Application Visibility and Control.

4. Click Find Solution. A list of partner solutions appears. A Cisco Compatible logo indicates that the solution has passed compatibility tests with AVC.

Operation of the Solutions Catalog page is subject to change.

For configuration, Cisco Prime Infrastructure has a provisioning GUI and built-in templates for enabling AVC capabilities on network devices.

For monitoring, Cisco Prime Infrastructure leverages the rich information provided by the network infrastructure, such as routers, and provides network administrators with a single tool for monitoring both network and application performance.

Network administrators can use Cisco Prime Infrastructure to drill down from an enterprise-wide network view to an individual user at a site, to proactively monitor and troubleshoot network and application performance problems.

Cisco AVC is interoperable with many router features and services. This section provides additional information about AVC integration with AppNav WAAS, NAT, and VRF.

AppNav Interoperability with NAT and VRF


Figure 2-3 shows a typical deployment scenario for Cisco AVC, demonstrating the integration with WAAS and the combination of optimized and pass-through traffic.

Attachment to a WAAS-Enabled Interface

Because optimized traffic may be exported twice (pre/post WAAS), a new segment field, servicesWaasSegment, is exported within the record in order to describe the type of traffic at the monitoring location. Table 2-2 describes the segment definitions.


For pass-through traffic (bypassing WAAS), the servicesWaasPassThroughReason field indicates the reason for pass-through. See the Cisco Application Visibility and Control Field Definition Guide for Third-Party Customers for a description of this field.

When using WAAS, application L7 fields are only supported on unoptimized traffic. URL records must be attached on the unoptimized AppNav virtual interface.

Table 2-3 describes the input/output interface field values used by AppNav when a monitor is attached to the WAN, LAN, or an AppNav virtual interface.


AppNav Interoperability with NAT and VRF


When AppNav is enabled, it uses the virtual routing and forwarding (VRF) configuration of the LAN interface although it is installed on the WAN interface. AppNav uses the LAN VRF to divert traffic to WAAS, based on local addresses.

Up to three tuples can be used per flow. Figure 2-5 shows an example. Using more than one tuple can be necessary because of different VRF configurations and/or NAT translation. The NBAR/FNF/AppNav features in the path interact together using the same flow.

For more information about Cisco GET VPN, see: http://www.cisco.com/en/US/products/ps7180/

Prior to IOS XE release 3.11S, for encrypted traffic, the NBAR component operated on the traffic in its encrypted form. As a result, NBAR was not able to provide deep packet inspection of GET VPN traffic.

Beginning with release 3.11S, NBAR operates on clear traffic (after decryption for ingress, or before encryption for egress). This enables running output QoS on inspected applications. In this release, input QoS and reporting in this release continue to operate on encrypted traffic.

To revert to the NBAR functionality that existed prior to release 3.11S, use the following command:

The following limitations apply to NBAR interoperability with GET VPN:

As in previous releases, QoS continues to operate on ingress traffic in its encrypted form, utilizing application identification information provided by the NBAR legacy component.

In this release, only the operation of NBAR and QoS output have changed. AVC visibility functionality is not supported for GET VPN encrypted traffic.