The IP SLA V2 UDP feature performs link monitoring by actively injecting traffic, and measuring metrics such as traffic packet loss and delay. The software crafts probe packets and injects them to the data plane. The responses are punted back to the CPU for statistics. The IP SLA packets carry sender or responder sequence numbers to infer the packet loss statistics per direction (sender to responder or vice versa), and the timestamps required for delay measurements.

The example explains the Jitter operation where, A is the IP SLA source, and B is the Responder. The IP Core connects A and B. 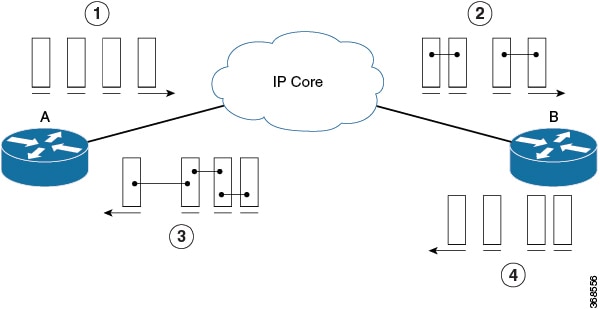 The router uses the Patented Control Protocol for UDP operation. It requires a responder for accurate results. The source and the destination routers subtract the processed delays.