A VPN is network connectivity across a shared infrastructure, such as an Internet service provider (ISP). Its function is to provide the same policies and performance as a private network, at a reduced cost of ownership, thus creating many opportunities for cost savings through operations and infrastructure.

As shown in the figure, an MLDP-based MVPN also supports the dynamic creation of data MDTs for high-bandwidth transmission. For high-rate data sources, a data MDT is created using P2MP LSPs to off-load traffic from the default MDT to avoid unnecessary waste of bandwidth to PEs that did not join the stream. The creation of the data MDT is signaled dynamically using MDT Join TLV messages. Data MDTs are a feature unique to Cisco IOS software. Data MDTs are intended for high-bandwidth sources such as full-motion video inside the VPN to ensure optimal traffic forwarding in the MPLS VPN core. The threshold at which the data MDT is created can be configured on a per-device or a per-VRF basis. When the multicast transmission exceeds the defined threshold, the sending PE device creates the data MDT and sends a User Datagram Protocol (UDP) message, which contains information about the data MDT to all devices on the default MDT.

MLDP creates the MDTs as follows:

All other operations of MVPN remain the same regardless of the tunneling mechanism:

The only other difference when using MLDP is that the MDT group address used in the mGRE solution is replaced with a VPN ID.

Initial deployment of an MLDP-based MVPN involves the configuration of a default MDT and one or more data MDTs.

The figure shows the default MDT scenario. The Opaque value used to signal a default MDT consists of two parameters: the VPN ID and the MDT number for the VPN in the format (vpn-id, 0) where vpn-id is a manually configured 7-byte number that uniquely identifies this VPN. The default MDT is set to zero. 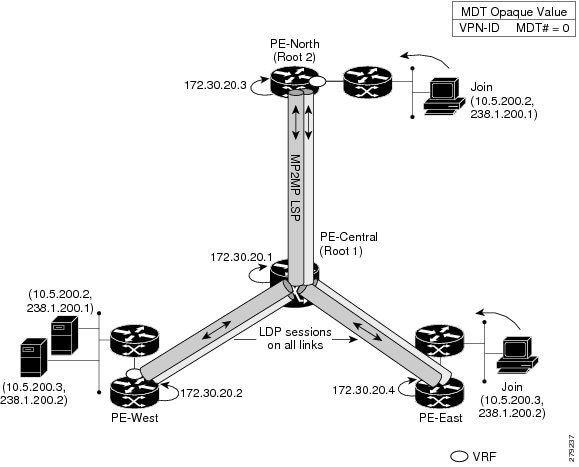 The figures show the downstream tree creation for each of the roots. Each PE device configured with VPN ID 100:2 creates the same Forwarding Equivalence Class (FEC) Type Length Value (TLV), but with a different root and downstream labels per MP2MP tree. The FEC type will be MP2MP Down, which prompts the receiving Label Switched Route (LSR) to respond with an upstream label mapping message to create the upstream path. 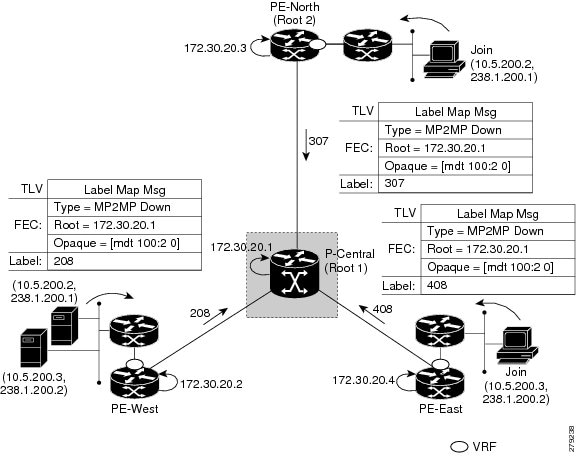 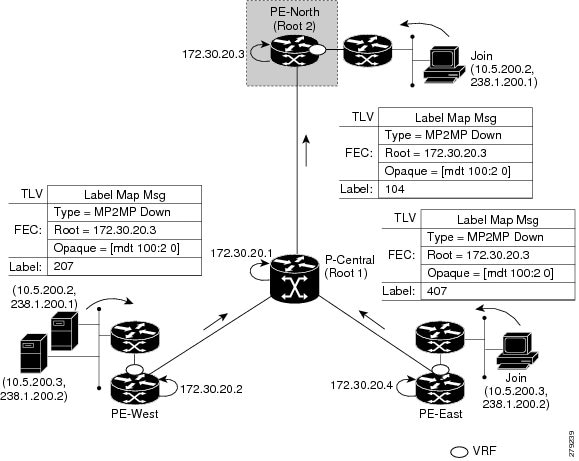 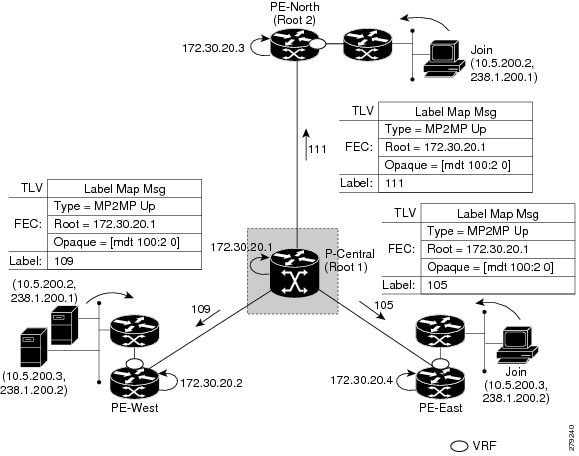 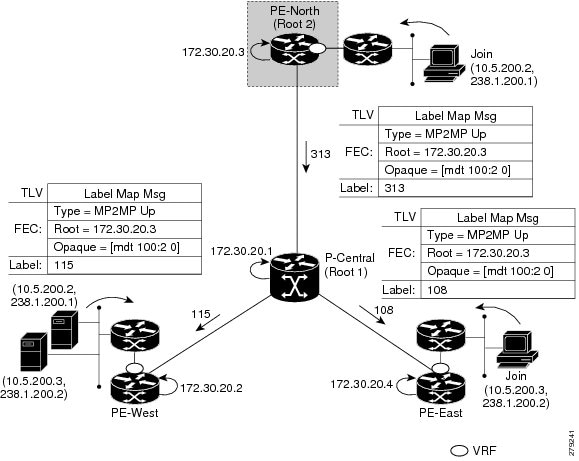 The signaling of the multicast state within a VPN is via PIM. It is called overlay signaling because the PIM session runs over the multipoint LSP and maps the VPN multicast flow to the LSP. In an MVPN, the operation of PIM is independent of the underlying tunnel technology. In the MVPN solution, a PIM adjacency is created between PE devices, and the multicast states within a VRF are populated over the PIM sessions. When using MLDP, the PIM session runs over an LSP-VIF interface. The figure shows PIM signaling running over the default MDT MP2MP LSP. Access to the MP2MP LSP is via the LSP-VIF, which can see all the leaf PE devices at the end of branches, much like a LAN interface. In the figure, PE-East sends a downstream label mapping message to the root, P-Central, which in turn sends an upstream label mapping message to PE-West. These messages result in the creation of the LSP between the two leaf PE devices. A PIM session can then be activated over the top of the LSP allowing the (S, G) states and control messages to be signaled between PE-West and PE-East. In this case, PE-East receives a Join TLV message for (10.5.200.3, 238.1.200.2) within VRF, which it inserts into the mroute table. The Join TLV message is then sent via the PIM session to PE-West (BGP next-hop of 10.5.200.3), which populates its VRF mroute table. This procedure is identical to the procedure using an mGRE tunnel. 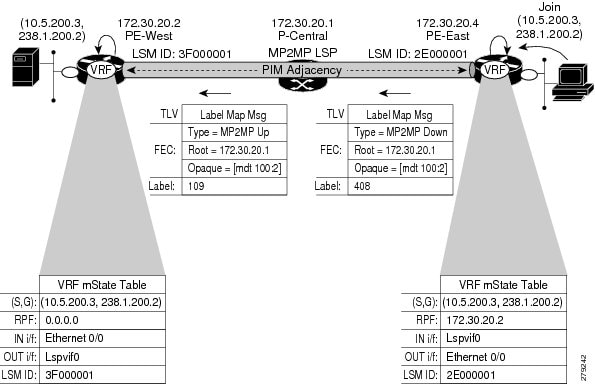 In an MVPN, traffic that exceeds a certain threshold can move off the default MDT onto a data MDT.

The figure shows the data MDT scenario. The Opaque value used to signal a data MDT consists of two parameters: the VPN ID and the MDT number in the format (vpn-id, MDT# > 0) where vpn-id is a manually configured 7-byte number that uniquely identifies this VPN. The second parameter is the unique data MDT number for this VPN, which is a number greater than zero.

In the scenario, two receivers at PE-North and PE-East are interested in two sources at PE-West. If the source 10.5.200.3 exceeds the threshold on the default MDT, PE-West will issue an MDT Join TLV message over the default MDT MP2MP LSP advising all PE devices that a new data MDT is being created.

Because PE-East has an interested receiver in VRF, it will build a multipoint LSP using P2MP back to PE-West, which will be the root of the tree. PE-North does not have a receiver for 10.5.200.3, therefore it will just cache the Join TLV message. 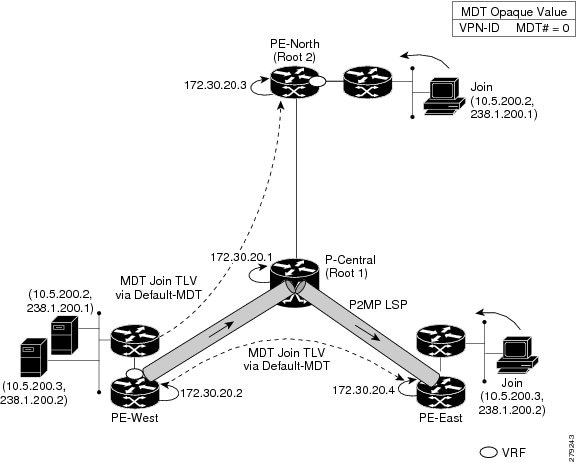 Perform this task to configure the initial MLDP settings.

Perform this task in privileged EXEC mode to verify the configuration of an MLDP-based MVPN.

Initial deployment of an MLDP-based MVPN involves the configuration of a default MDT and one or more data MDTs.

The following example shows how to configure the default MDT for an MLDP-based MVPN. This configuration is based on the sample topology illustrated in the figure.

This configuration is consistent for every PE device participating in the same VPN ID. The vpn id 100:2 command replaces the MDT group address used with the mGRE transport method. To provide redundancy, two default MDT trees are statically configured, rooted at P-Central and PE-North. The selection as to which MP2MP tree the default MDT will use at a particular PE device is determined by Interior Gateway Protocol (IGP) metrics. An MP2MP LSP is implicit for the default MDT.

The sample output in this section displays the database entries for the MP2MP trees supporting the default MDT at PE-East. The database is searched by Opaque value MDT 100:2, which results in information for two MP2MP trees (one for each root) being returned. Both trees have different system IDs (2E000001, F2000005) and use the same Opaque value ([mdt 100:2 0]), but with different roots. The last 0 in the Opaque value indicates this tree is a default MDT. Entry 79000004 shows it is the primary MP2MP tree, therefore PE-East will transmit all source multicast traffic on this LSP, and B2000006 will be the backup root. Note that interface LSP-VIF interface 0 represents both MP2MP LSPs. The Local Label (D) is the downstream label allocated by PE-East for this tree. In other words, traffic from the root will be received with either label 408 (Primary Tree) or 407 (Backup Tree). The Out Label (U) is the label that PE-East will use to send traffic into the tree; upstream towards the root, either 105 for the Primary Tree or 108 for the Backup Tree. Both these labels were received from P-Central.

The sample output shown in this section displays the VRF (MDT 100:2) MLDP database entry 1F000001 for the primary MP2MP LSP, which is P-Central. Because the local device P-Central is the root, there is no upstream peer ID, therefore no labels are allocated locally. However there are three replication clients, representing each of the three PE devices: PE-North, PE-West, and PE-East. These replication clients are the downstream nodes of the MP2MP LSP. These clients receive multipoint replicated traffic.

In the replication entry looking from the perspective of the root, there are two types of labels:

From the labels received and sent in the replication entries, the Label Forwarding Information Base (LFIB) is created. The LFIB has one entry per upstream path and one entry per downstream path. In this case because P-Central is the root, there are only upstream entries in the LFIB that have been merged with the corresponding downstream labels. For example, label 105 is the label P-Central sent to PE-East to send source traffic upstream. Traffic received from PE-East will then be replicated using the downstream labels 307 to PE-West and 208 to PE-North.

The sample output shown in this section displays the entry on P-Central for the MP2MP LSP rooted at PE-North (backup root). In this tree P-Central is a branch of the tree, not a root, therefore there are some minor differences to note:

The following example shows how to configure the data MDT for an MLDP-based MVPN. This configuration is based on the sample topology illustrated in the figure.

The sample output in this section displays the data MDT configuration for all the PE devices. The mdt data commands are the only additional commands necessary. The first mdt datacommand allows a maximum of 60 data MDTs to be created, and the second mdt datacommand sets the threshold. If the number of data MDTs exceeds 60, then the data MDTs will be reused in the same way as they are for the mGRE tunnel method (the one with the lowest reference count).

The sample output in this section displays the VRF mroute table on PE-West before the high-bandwidth source exceeds the threshold. At this point there are two streams, representing each of the two VPN sources at PE-West, on a single MP2MP LSP (System ID D8000000). The LSP represents the default MDT accessed via LSP-VIF interface 0.

The sample output in this section displays the output after the source transmission exceeds the threshold. PE-West sends an MDT Join TLV message to signal the creation of a data MDT. In this case, the data MDT number is 1, therefore PE-East will send a label mapping message back to PE-West with a FEC TLV containing root=PE-West, Opaque value=(mdt vpn-id 1). The System ID is now changed to 4E000003 signaling a different LSP; however, the LSP-VIF is still LSP-VIF interface 0. The (S, G) entry also has the "y" flag set indicating this stream has switched to a data MDT.

For the interface LSP-VIF, each virtual circuit represents a unique multipoint LSP forwarding instance. The correct adjacency is selected when sending the multicast packet. The sample output in this section displays the application of that concept on PE-West. There is a single LSP-VIF interface 0 interface, but it has three adjacencies as follows:

The sample output in this section displays the MLDP entry for the data MDT (4E000003) on the ingress device PE-West. The following points about this entry should be noted:

The sample output in this section displays the database entry for the data MDT on PE-East, the egress device. Also shown is the MDT Join TLV message that was sent from PE-West over the default MDT. The MDT Join TLV message contains all the necessary information to allow PE-East to create a label mapping message P2MP LSP back to the root of PE-West. Label 414 will be used by P-Central to send traffic to PE-East.

LFIB Entry for the Data MDT

The sample output in this section displays the LFIB entry for the data MDT as it passes through P-Central and PE-East. The Tunnel ID used for the LSP is the Opaque value [mdt 100:2 1].

The following example shows an MLDP-based MVPN configuration that has been migrated from a PIM with mGRE based MVPN. The differences in the CLI from the PIM with mGRE-based MVPN are highlighted via comments below. In this example, MLDP derives the FEC from the import route target configured in the VRF.