Installing and Removing a SPA

This chapter describes how to install or remove SPAs on the Cisco ASR 1000 Series Router. This chapter contains the following sections:

Each SPA circuit board is mounted to a metal carrier and is sensitive to electrostatic discharge (ESD) damage. See the “Preventing Electrostatic Discharge Damage” section for ESD precautions.

Before you begin installation, read Chapter 4, “Preparing to Install a SIP or a SPA”, for a list of parts and tools required for installation.

Always handle the SPA by the carrier edges and handle; never touch the SPA components or connector pins. (See Figure 6-1.)

This section provides step-by-step instructions for installing and removing a SPA in a SIP.

When performing the following procedures, wear a grounding wrist strap to avoid ESD damage to the SPA. Some platforms have an ESD connector for attaching the wrist strap. Do not directly touch the midplane or backplane with your hand or any metal tool.

Installing a SPA in a SIP

To install a SPA in a SIP, do the following:

To insert the SPA in the SIP, locate the guide rails inside the SIP that hold the SPA in place. They are at the top left and top right of the SPA slot and are recessed about an inch.

Carefully slide the SPA all the way in the SIP until the SPA is firmly seated in the SPA interface connector. When fully seated, the SPA might be slightly behind the SIP faceplate.

After the SPA is properly seated, fasten the SPA in place with the captive installation screws on either side of the SPA.

Removing a SPA from a SIP

Before you remove a SPA from the SIP, read this important information about SPA cable clips that will help to make removing the SPA easier. The SPA accessory kit is shipped with three different versions of cable clips, as shown in Figure 6-3. To install a cable clip to each side of the SPA, follow these steps: 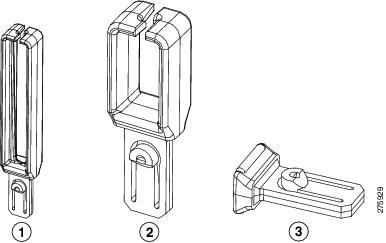 The cable clip shown in the following graphics is only an example of one option. Select the cable clip version most useful in your environment.

Hold and position the cable clip with the narrow edge vertically lined up with the open end of the plastic pull tab that protrudes from the SPA, as shown in Figure 6-4. 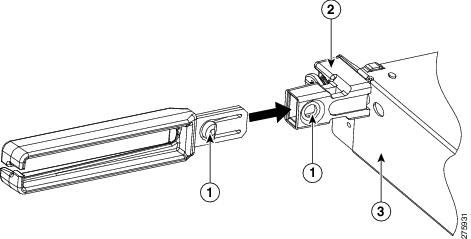 The cable clip is designed to easily snap into position.

Install another cable clip to the other side of the SPA. Figure 6-5 shows the cable clip fully inserted into the plastic pull tab on a SPA.

You have installed the cable clip to the SPA. Go to the next step to remove the SPA.

If attached, remove any cables from the SPA.

To remove the SPA from the SIP, unfasten the captive installation screws on either side of the SPA. Figure 6-6 illustrates how to remove a SPA in a SIP. 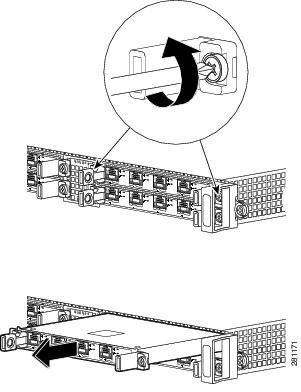 This completes the procedure for removing a SPA from the SIP.

Cisco ASR 1000 Series Router SIPs and SPAs support online insertion and removal (OIR). SPAs can be inserted or removed independently from the SIP. OIR of a SIP with installed SPAs is also supported.

For more information about performing OIR, refer to the “Preparing for Online Removal of a SIP” section.

Any contamination of the fiber connection can cause failure of the component or failure of the whole system. A particle that partially or completely blocks the core generates strong back reflections, which can cause instability in the laser system. Inspection, cleaning, and reinspection are critical steps to take before making fiber-optic connections.

This section describes the procedures you can use to verify the SIP and SPA installation, and includes information on the following topics:

This section describes how to verify the SIP and SPA installation by observing the SIP LED states, SPA LED states, and the information displayed on the console terminal.

Use the following procedure to verify that a SIP and SPA are installed correctly:

If the SIPs and SPAs have not become active within three minutes, refer to the system console messages as follows:

Using show Commands to Verify the SIP and SPA Status

The following procedure uses show commands to verify that the new SPAs are configured and operating correctly.

Use the show running-config command to display the system configuration. Verify that the configuration includes the new SPA interfaces.

Display all of the current SPAs and a summary of their status using the show hw-module subslot all oir command.

Use the show hw-module subslot all fpd command to verify the FPD version information of the SPAs installed in the system.

If a SPA does not meet the minimum FPD version required, it will be updated automatically. If the update fails, the failing SPA will be powered down and an error message will be reported on the system console.

Use the show version command to obtain a few details on the installed SIPs and interfaces.

Table 6-1 describes the show commands you can use to display SPA information.

To install cable management brackets on a SPA, perform the following steps:

Screw the two pull assemblies into both sides of the SPA.

Insert the cable management bracket into the slot.

To remove the cable management bracket, depress the button on the bracket and pull it out.

Blank filler plugs are provided if no cable management brackets are installed.