This chapter describes how to install or remove SPAs on the Cisco 12000 Series Router. This chapter contains the following sections:

Each SPA circuit board is mounted to a metal carrier and is sensitive to electrostatic discharge (ESD) damage. Before you begin installation, read "Preparing to Install a SPA Interface Processor or a Shared Port Adapter" for a list of parts and tools required for installation.

Always handle the SPA by the carrier edges and handle; never touch the SPA components or connector pins. (See Figure 5-1.)

This section provides step-by-step instructions for removing and installing a SPA in an SIP.

When performing the following procedures, wear a grounding wrist strap to avoid ESD damage to the SPA. Some platforms have an ESD connector for attaching the wrist strap. Do not directly touch the midplane or backplane with your hand or any metal tool, or you could shock yourself.

Installing a SPA in a SIP

To install a SPA in a SIP, refer to Figure 5-2 and do the following:

To insert the SPA in the SIP, locate the guide rails inside the SIP that hold the SPA in place. They are at the top left and top right of the SPA slot and are recessed about an inch, as shown in C of Figure 5-2.

Carefully slide the SPA all the way in the SIP until the SPA is firmly seated in the SPA interface connector. When fully seated, the SPA might be slightly behind the SIP faceplate.

After the SPA is properly seated, turn the SPA lock to its locked and horizontal position, as shown in A of Figure 5-2.

Removing a SPA from a SIP

To remove a SPA from a SIP, refer to Figure 5-2 and do the following:

If attached, remove any cables from the SPA. 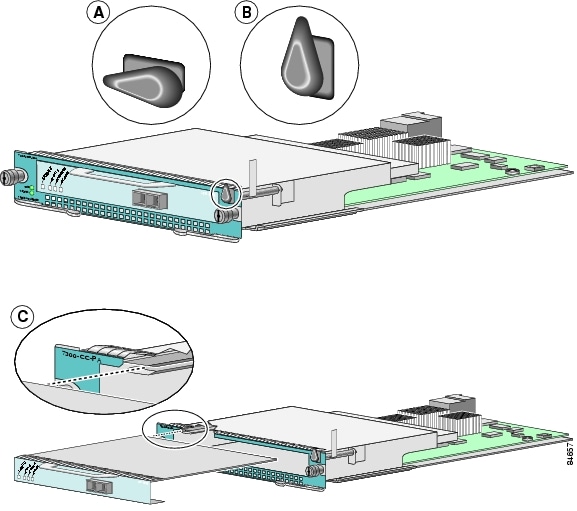 Cisco 12000 series router SIPs and SPAs support online insertion and removal (OIR). SPAs can be inserted or removed independently from the SIP. OIR of a SIP with installed SPAs is also supported.

Any contamination of the fiber connection can cause failure of the component or failure of the whole system. A particle that partially or completely blocks the core generates strong back reflections, which can cause instability in the laser system. Inspection, cleaning, and reinspection are critical steps to take before making fiber-optic connections.

See the Inspection and Cleaning Procedures for Fiber-Optic Connections document for information on cleaning optical devices.

This section describes the procedures you can use to verify the SIP and SPA installation, and includes information on the following topics:

This section describes how to verify the SIP and SPA installation by observing the SIP LED states, SPA LED states, and the information displayed on the console terminal.

A POS interface is used in the following examples for illustrative purposes.

When you reinsert the SIP with the installed POS SPA, the system automatically brings up the interface that was changed to down when the SIP was removed.

Use the following procedure to verify that a SIP and SPA are installed correctly:

SPAs will follow the same sequence once the SIP has completed its initialization. The SPA STATUS LEDs will illuminate amber, turning to green when the SPAs become active.

When the SIP and SPA STATUS LEDs are green, all associated interfaces are configurable.

If a SIP or SPA is replaced with a module of the same type (as in an OIR or hardware swap), the previous configuration will be reinstated when the SIP or SPA becomes active.

If a SIP or SPA has not been previously installed in the same slot or subslot, then the configuration for all associated interfaces will be empty.

If the SIPs and SPAs have not become active within three minutes, refer to the system console messages as follows:

If there is no indication that an FPD upgrade is underway, see Chapter 6, "Troubleshooting the Installation."

The following procedure uses show commands to verify that the new SPAs are configured and operating correctly.

Use the show running-config command to display the system configuration. Verify that the configuration includes the new SPA interfaces.

Display all of the current SPAs and a summary of their status using the show hw-module subslot oir command.

Use the show hw-module subslot fpd command to verify the FPD version information of the SPAs installed in the system.

If a SPA does not meet the minimum FPD version required, it will be updated automatically. If the update fails, the failing module will be powered down and an error message will be reported on the system console.

Use the show version command to obtain a few details on the installed SIPs and interfaces available.

Table 5-1 describes the show commands you can use to display SPA information.

A Fast Ethernet interface is used in the following examples for illustrative purposes.

When a new SIP is inserted or when a SIP is moved to a new slot, the system recognizes the new interfaces but leaves them in the shutdown state until you configure them and change their state to up.

The following sample display shows the events logged by the system as you insert a new SIP in module slot 3.

Use the following procedure to verify that the SIP is installed correctly:

If you installed a new SIP, the STATUS LED should be on (green). The system should recognize all new interfaces but leave them configured as down.

If you replaced a SIP, the STATUS LED should be on (green). The system does not recognize each interface and places it in the administratively down state.

If the ENABLED LED on a SPA fails to go on, the SPA or the SIP might not be fully seated even if the SPA lock is in the locked and horizontal position. When a SPA is not recognized, the SIP is deactivated, and its OIR LED is yellow.

Remove the SIP from the router.

Remove the SPA from the SIP.

Inspect the SIP and the SPA. Verify there are no bent pins or parts and that there is nothing lodged in the two devices that could prevent a good connection.

Insert the SIP into the router.

If the ENABLED LED on a SPA still fails to go on, remove the SIP and install it in another available slot on the router.

If the ENABLED LED goes on, suspect a failed backplane port in the original slot.

If the ENABLED LED fails to go on, remove the SIP and ensure the SPA is firmly seated in its slot. Remove and reinstall it accordingly.

If the ENABLED LED still fails to go on, but other LEDs on the SIP SPA go on to indicate activity, proceed to Step 5 to resume the installation checkout; suspect that the ENABLED LED on the SPA has failed. Contact a service representative to report the problem and obtain further instructions.

If no LEDs on the SPA go on:

Suspect a faulty SIP. Contact a service representative to report the problem and obtain further instructions.

If the SPA is new and not a replacement, configure the new SPA using the Cisco 12000 Series Router SIP and SPA Software Configuration Guide (Cisco IOS).

If the SIP is a replacement, use the show interfaces type slot-number/port-number command or the show controllers command to verify the status of the SPAs. (See the "Using show Commands to Verify SIP and SPA Status" section.)

If you replaced a SIP with another SIP with a different SPA installed, the system recognizes the interfaces on the previously configured SPA but does not recognize the new SPA interfaces. The new interfaces remain in the shutdown state until you configure them.

When the interfaces are up, check the activity of each SPA by observing the status LEDs.

If an interface LED fails to go on and a cable is connected to the interface port, check the cable connection and make certain it is properly seated in the connector.

Repeat Step 1 through Step 8 to verify that any additional MSCs are properly installed.

If you experience other problems that you are unable to solve, contact TAC (see the "Obtaining Documentation and Submitting a Service Request" section on page -xviii in the Preface) or a service representative for assistance.

This section provides brief descriptions of the ping command. The ping command allows you to verify that a SPA port is functioning properly and to check the path between a specific port and connected devices at various locations on the network. After you verify that the system and the SIP have booted successfully and are operational, you can use this command to verify the status of the SPA ports. Refer to the publications listed in the "Related Documentation" section on page xviii for detailed command descriptions and examples.

The ping command sends an echo request out to a remote device at an IP address that you specify. After sending a series of signals, the command waits a specified time for the remote device to echo the signals. Each returned signal is displayed as an exclamation point (!) on the console terminal; each signal that is not returned before the specified timeout is displayed as a period (.). A series of exclamation points (!!!!!) indicates a good connection; a series of periods (.....) or the messages [timed out] or [failed] indicate that the connection failed.

Following is an example of a successful ping command to a remote server with the IP address 10.1.1.60:

If the connection fails, verify that you have the correct IP address for the server and that the server is active (powered on), and repeat the ping command. 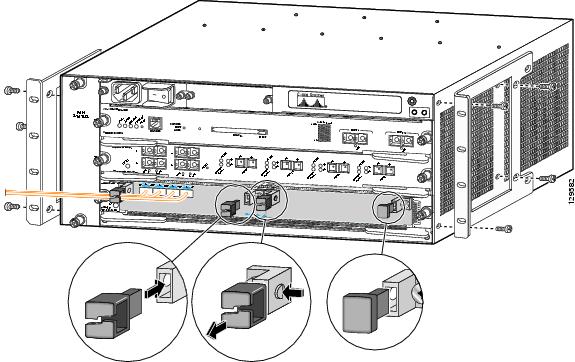 To install cable-management brackets on a SPA, perform the following steps:

Screw the two pull assemblies into both sides of the SPA.

Insert the cable-management clip into the slot.

To remove the cable-management clip, depress the button on the clip and pull it out.

Blank filler plugs are provided if no cable-management clips are installed.