This chapter describes how to install the DHCP forwarder application as well as adding and removing resources.

This module is relevant only when the DHCP Lease Query Login Event Generator (LEG) or the DHCPv6 Lease Query LEG is installed on the Cisco Service Control Subscriber Manager server. See the “DHCP Forwarder Application Enhancements for DHCPv6” chapter.

If you are performing a fresh install of the Cisco Service Control Subscriber Manager, manually install the DHCP forwarder by following these steps.

Run the installation script as root.

The installation script extracts DHCP Forwarder distribution to the sm-inst-dir \sm\server\addons\dhcp-forwarder directory ( sm-inst-dir refers to the Subscriber Manager installation directory). The script adds the initialization scripts to their location according to the operating system running on the machine.

(Optional) Confirm that the following ports are not being used by any other application:

This application can be run using one of the following methods:

It is not possible to run the install-forwarder.sh script if the /etc/motd file exists. The file should be moved or removed prior to running the script. Use the ps -eaf | grep DHCP command to view the running process of the DHCP Forwarder.

To verify that the DHCP Forwarder process is active at all times, a Veritas Cluster Server (VCS) Agent of type OnOnlyProcess is added as a resource.

Add an OnOnlyProcess resource called DHCP_Forwarder to the service group.

Note the path and arguments of the DHCP Forwarder.

Run the following command via a Telnet session on each of the servers:

Look for the line containing the text “DHCP_FORWARDER”. This line contains the path and arguments of the DHCP Forwarder to be used in the next step.

Define the parameters as follows:

For further information about the parameters, see Figure 10-1. 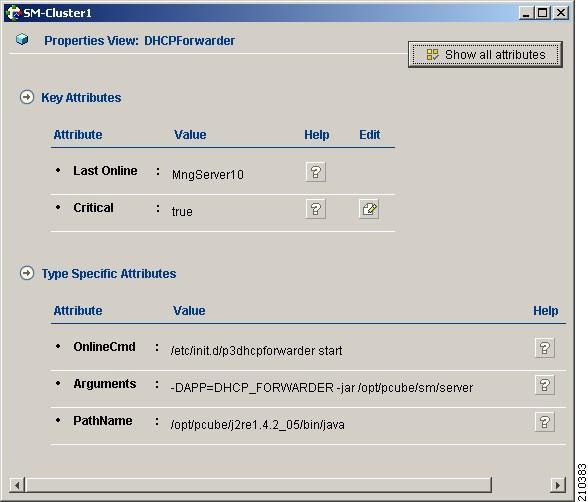 Check the Critical and Enable parameters.

Right-click on the DHCP Forwarder Resource icon and choose Delete from the drop-down menu (Figure 10-2). 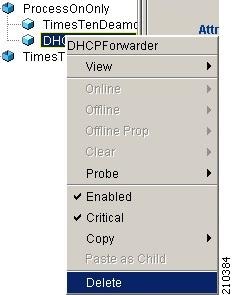