The Cisco Service Control for Managing Remote Cable MSO Links Solution is enhanced with new features that are consistent with DOCSIS 3.0 specifications.

The solution includes support for the following features:

The IPDR record includes the required information for mapping cable modems and CPEs to virtual links.

The CMTS generates periodic and event based IPDR records for each cable modem. This record includes the IP address of the cable modem and CPEs.

If you configure CMTS to generate IPDR records periodically, by default, CMTS generates the records every 15 minutes.

With wideband data services, multiple DS channels are aggregated into a single logical wideband channel (bonding group) that delivers higher bandwidth to the wideband cable modem when compared to DOCSIS 2.0 technology. This aggregation of the DS channels is referred to as channel bonding. Data rates in this virtual channel range from hundreds of megabits to potentially gigabits per second, creating more available bandwidth in the network.

The DS channels are used either as primary channels (used for both broadband and narrowband channels) or secondary channels (used only for wideband channels), or both. The solution provides narrowband data services to support DOCSIS 1.x or 2.0 modems and wideband data services to support DOCSIS 3.0 modems over existing HFC networks and allows DOCSIS 1.x or 2.0 and DOCSIS 3.0 modems to share the same DS channel.

The enhanced Cisco Service Control solution leverages the Cisco SCE bandwidth control and reporting capabilities to monitor and control the CMTS resources at the QAM level. Multiple QAMs are aggregated into a virtual group (bundle group). The bandwidth allocation for different modems are done both on the CMTS and the EQAM. The EQAM minimizes the packets waiting in queue for each channel.

The EQAM manages the queues differently for legacy and 3.0 modems:

The enhancements to the Cisco SCE bandwidth control include:

Table 2-1 lists the CIR and PIR values of the 3.0 cable modems with 20 percentage bandwidth of narrowband channel allocation.

Using the Logical Channel Support feature, cable system operators can segment and time-multiplex one spectrum for supporting the legacy modems, near and far modems, and new DOCSIS 3.0 modems with various service levels.

In the following example, the MAC domain have five upstream channels, each split into two logical channels. The domain also has tow bonding groups and the logical channels are grouped.

This is the mapping table for this upstream logical channel configuration:

In Overlapped Bonding Groups, a single channel can be part of more than one bonding group.

Channels and Bonding Groups that are overlapped across MAC domains are not supported.

These are the list of channels and radio frequency bandwidth allocation for each channel on each wideband interface:

The following example provides details of the logic for IPDR and DHCP mapping:

Primary channels of a CMTS are those channels that are capable of supporting legacy or DOCSIS 2.0 modems.

The basic Cisco SCE - CMTS integration supports only a single Primary channel for each bonding group. The basic integration supports a mix of DOCSIS 2.0 and DOCSIS 3.0 cable modems on the primary channel but it is limited to single channel on each bonding group. The main reason for the single primary limitation is the DHCP protocol. The Cisco SCE - CMTS integration contains SNMP polling to get the CMTS configuration and DHCP sniffing for mapping of cable modem to virtual link inside the Cisco SCE. The CMTSs report, through the DHCP protocol, about single Primary channel only. 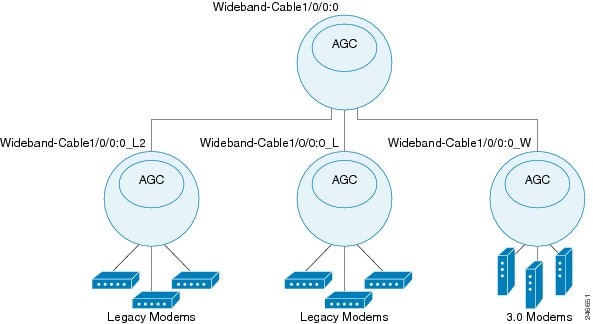 For load balancing the cable modems on the available interfaces, a CMTS can dynamically change the channels assigned to a cable modem. During a dynamic channel change, a cable modem does not process a new DHCP login process.

This is an example of the IPDR message:

The CMTS sends IPDR messages for each cable modem association and channel changes to the collector. The IPDR LEG gets the mapping of the latest channel changes and updates the Cisco SCE.

The structure of the DHCP messages varies between various CMTS vendors, but the IPDR records or messages are defined as part of the DOCSIS standard and are identical over all the vendors.

For non-Cisco CMTS, The VLM supports SNMP polling to get the CMTS configuration from these CMTS.

The bootfile name is configured using these options:

DHCP login event generator (LEG) includes regular expression capabilities that are used to configure specific information in the Bootfile name, which is used for mapping.

Whenever a legacy modem registers with a CMTS, the modem sends a CM REG TYPE IPDR message which contains CmtsTcsId and CmtsRcsId. These IDs are used for upstream and downstream index mapping.

For a DOCSIS 3.0 modem, mappings are updated on receiving a periodic SAMIS TYPE1 message from the CMTS for a modem. The value of ServiceFlowChSet in the message is used for mapping the upstream and downstream indices.